Crowd bugs out despite lackadaisical tone to evening 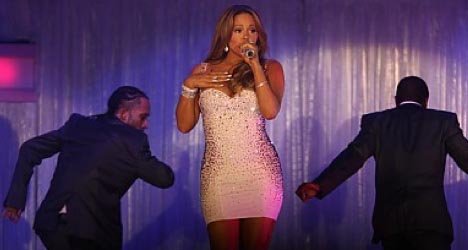 Mariah Carey‘s cold was a running theme at the singer’s Air Canada Centre show. “If you don’t mind, just have a little mercy. I mean, it’s not like you can just take a Theraflu while you’re onstage,” she languidly told the crowd, mimicking herself dozing off mid-concert.

It’s a testament to her vocal talent, then, that Mariah still managed to flex her legendary five-octave range throughout the night. Looking like a high-end cupcake in a frilly caramel-coloured dress, Mimi broke out more recent hits Shake It Off and Touch My Body. She then retreated backstage for one of four costume changes while her cadre of dancers killed time with an 80s-era Soul Train-style routine.

Based on their reactions, the crowd was there for Mariah’s 90s classics. They bugged out for Always Be My Baby, Honey, and the closer, Hero. For some reason, the no-brainer Fantasy wasn’t on the setlist, and few seemed interested in her discofied Diana Ross-mashup rendition of Heartbreaker. One exception was her commanding performance of the anthemic single Obsessed, which came out last year.

Mariah, now wearing a shimmery black sequined number, asked the crowd to participate in a concert scene from her new music video for 100 Percent. The performance then devolved into an onstage dispute with her management team, which fit perfectly with the night’s lackadaisical tone.[rssbreak]