By Kevin Ritchie and Glenn Sumi 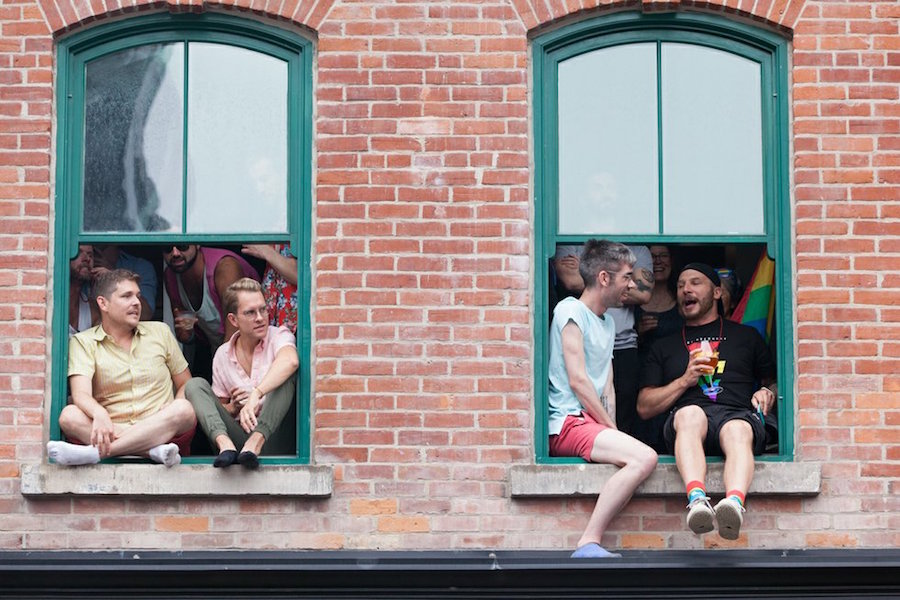 Toronto Pride revellers will watch the 40th anniversary parade on screens this year.

Planning a major event against a backdrop of gradually evolving public health restrictions and the ever-growing impatience among the public over the lack of in-person can’t be easy. Enter Pride’s “phygital” program, a series of art installations at Stackt Market, Harbourfront Centre, Woodbine Beach, LED screens around town and other locations that are giving Pride a real-life focal point in a way that isn’t about a massive crowd gathering. Artists displaying works include Ness Lee, Zahra Siddiqui, Tea Base and Eric Kostiuk Williams.

TIFF’s digital platform is streaming a number of recent queer films throughout June, including Sebastián Lelio’s A Fantastic Woman, Chase Joynt and Aisling Chin-Yee’s No Ordinary Man and Wanuri Kahiu’s Rafiki as part of the program Queer Becoming. The month will cap off with Deep Focus, a workshop on poetry and community-building by Toronto artist/activist Syrus Marcus Ware, as well as a screening of Marlon T. Riggs’s experimental classic from 1989, Tongues Untied.

With Pride turning 40 this year, some programming is putting a focus on intergenerational conversations and reciprocal learning. Artist and photographer Jocelyn Reynolds documents elder 2SLGBTQIA+ people’s stories via portraiture and oral histories that will debut online as part of Buddies’ digital Pride offerings.

Tom Hearn and Coko Galore, in association with Bad Dog Comedy Theatre, present four shows over two days, including The Variety Hour, hosted by Hunni Krüller and featuring a reading of Avery Jean Brennan’s play No Country For The/Themes (June 18 at 7 pm); The Party Show, a queer improv show directed by Galore (June 18 and 19 at 9 pm); Theatresports, hosted by Hearn (June 19 at 7 pm).

Opening Weekend Ceremony: Back to the 80s

Pride is going big over two weekends this year and the first one kicks off with an 80s-themed concert (presumably since Toronto Pride was born in the 80s). Some of our favourite R&B acts are on the lineup including Toronto-via-Montreal musician TIKA, eclectic singer/songwriter Desiire and Toronto duo TRP.P.

June 22-26 at 8 pm. By lottery (one audience member per show), which closes June 14 at 6 pm. Free (must bring headphones). 400 Grace (south of Bloor/Christie Pits). buddiesinbadtimes.com

Local musician and queer scene icon Carole Pope is teaming with the ArQuives to host a Pride Toronto history-themed trivia night on Zoom. Suggested question: Which Toronto rock band had a track on the Cruising soundtrack? Hmmm….

Cole Alvis directs a virtual reading of Gabe Maharjan’s fantasy about a trans woman who wakes up in Rio de Janeiro on the day of her surgery and starts using Tinder. Co-produced by bigT collective, lemonTree creations and Buddies.

Heath V. Salazar and Kwaku Okyere host Soulpepper’s Queer Youth Cabaret, in which 13 queer artists ask themselves how they perceive their future and what queerness will look like at the turn of the 22nd century.

Typically one of the largest events of its kind, the annual Trans March and Rally is reinventing itself as an hour of speakers, performers and community engagement to celebrate accomplishments from the past year and raise awareness for ongoing fights for trans rights.

The showcase Two-Spirit and Indigiqueer has quickly earned a rep as one of the most adventurous stages at Pride, with artists representing a cross-section of genres. Drag performer MX Wolverine and pole dancer Adrienne Huard are among this year’s acts.

The grassroots march is generally regarded as an experience closer to Pride’s roots as a protest. The event is again morphing into a virtual rally format for a second year. Expect a mix of performers, speakers and community activists taking the horn.

If you’re missing the Beaver, AlternaQueer is the place to get your alternative drag fix – digitally. The lineup includes Yovska, Selena Vyle, Pickles LaVey, Seyoncé and more.

Performed live from a downtown Toronto backyard, Ajahnis Charley and Tom Hearn deliver a double-solo night of sketch comedy featuring songs, characters, impressions and anything else that happens during a livestream. Part of Buddies’ Queer Pride series.

The 23-years-young Pride party for the city’s African, Black and Caribbean LGBTQ community brings together DJs, ballroom, drag artists and musical performers under the theme Black Is Love. There will be a special dedication to people who have passed, including a tribute to the late great Toronto drag legend Michelle Ross.

Canada’s Drag Race winner Priyanka – aka NOW readers’ favourite drag queen of 2019 – is hosting the 40th annual Pride Parade, which is obviously going to be quite different from the first official pride at Grange Park in 1981. For one thing, it’s happening entirely online. But since Toronto Pride has been doing the digital thing for a hot minute, we’re expecting a special viewing experience this year. Musical acts on the bill include iskwē and Allie X.