Our faves this year include laid-back French, family-style Persian recipes, diner-inspired Korean eats and a whole lot of pasta 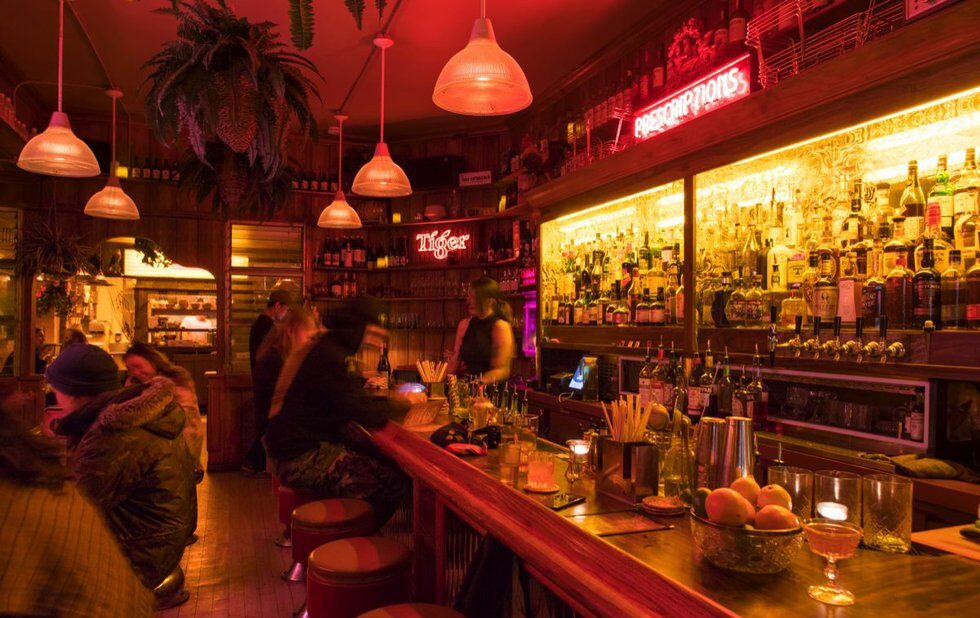 The single most memorable thing I put in my mouth this year was Seoul Shakers’ chopped cheese ($8-$15): A little cluster of White Castle-size smash patties with kimchi, melted yellow cheddar and burger fixings, all afloat on rich, smushy potato rolls. (My dining companion and I looked at each other and immediately realized we were gonna need a second and possibly third order.) The second most memorable was – in contrast to that festival of fast-foody excess – the vegan eggplant kangpungi ($10), which melds molten fried eggplant with a sweet soy glaze. If neither of those appeal to you for some reason, there’s also a large menu of Korean bar snacks, quirky cocktails like a bourbon sour “shake” with Korean rice wine and neon-lit-tropical-diner vibes for days. 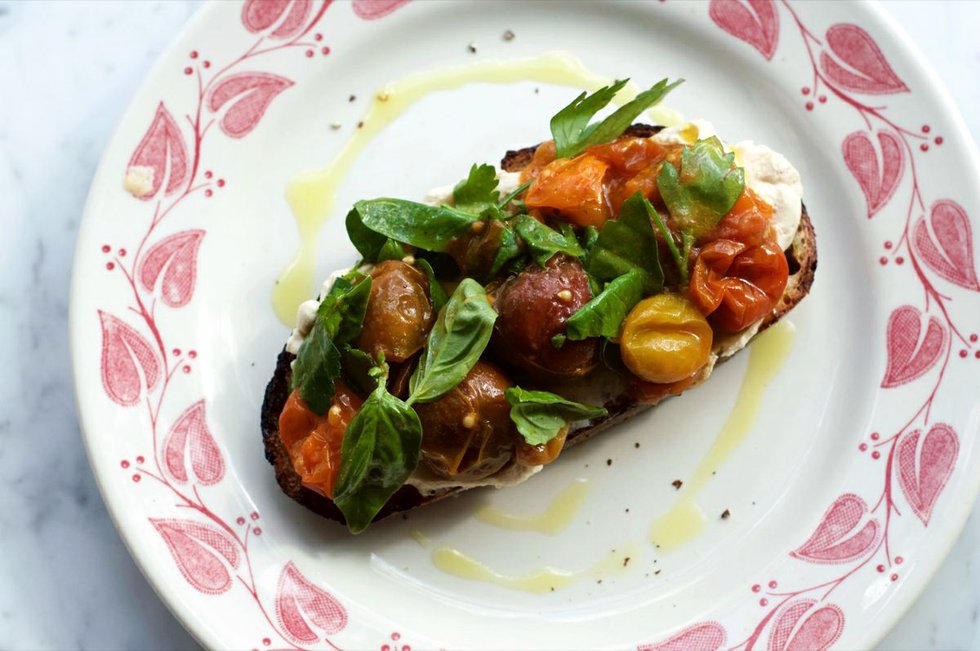 Let’s say you’re looking to replace a restaurant that defined a city’s dining scene. No pressure, right? But if you’re Jen Agg, designing the follow-up to the Black Hoof, there’s a relatively clear-cut solution to sequelitis: Just build the kind of place you wish you could hang out in on a weeknight. The Vendetta playbook seems a tad random on paper, but it works brilliantly: Brown-and-orange ‘70s decor offset with rock posters and plants simple Italian eats late-lunch muffulettas and late-night nachos highball drinks Pixies on the stereo. Most of James Santon’s menu is available in half-portions (genius!), allowing you to sample your way through thumb-width pappardelle with beef and a dusting of horseradish ($19 all prices full portions), dessert-y squash with syrupy agrodolce ($13), and an immensely satisfying bruschetta with smoked ricotta and jewel-like roasted tomatoes ($9) Play your cards right and you can save room for Santon’s kick-ass house-made gelato ($7), which switches flavours every couple days. I’m told the latest one is eggnog if you get down there now, you might still be able to catch it. 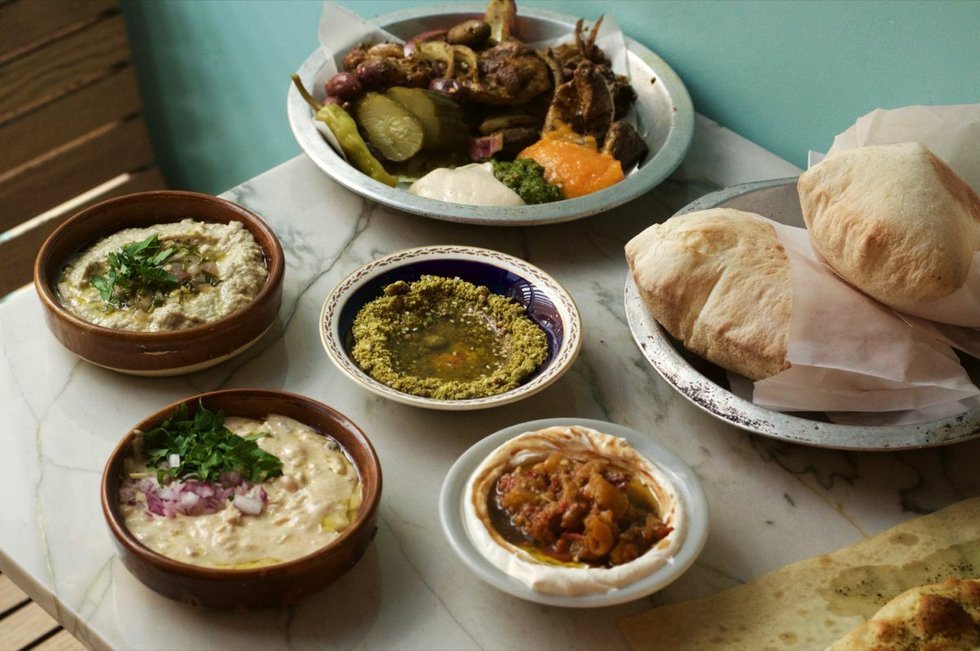 The secret sauce behind Anthony Rose’s Middle Eastern revamp of Bar Begonia is, in fact, a number of secret sauces: Emerald-green zhoug with fresh herbs and piquant jalapenos, velvety amba that’s sweet and sour with an apricot hue and liberal quantities of tahini and olive oil. All of the above are unearthly levels of delicious, but because you can’t just order a squirt bottle of condiments and call it an evening, Rose weaves them into a rainbow of mezes and share plates big and small. Dips and veggie dishes (like charred broccoli, $16) impress, as does the everything-but-the-kitchen-sink sabich platter ($21) with flatbread, fries and egg – but whatever you get, brace yourself for big, bold flavour. 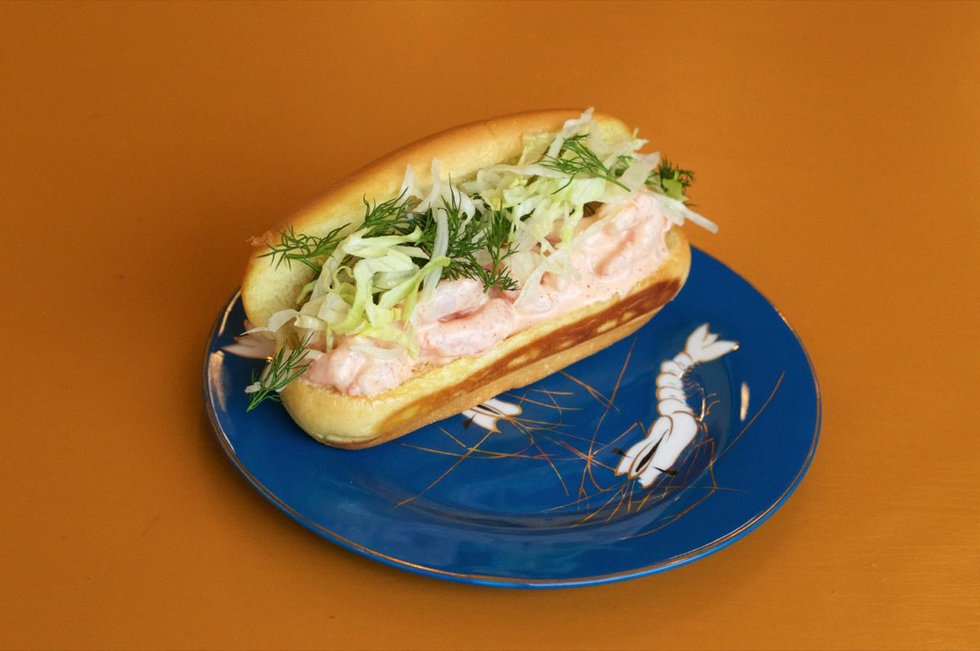 Mustard tables, mismatched planters and macramé: this laid-back lunch and dinner spot near the Junction has funky 70s vibes to spare. (Actually, upon revisiting photos of Donna’s, the presence of actual macramé remains inconclusive. No matter, the macramé is implied.) The menu (from Ann Kim, Jed Smith and Peter Jensen) is a little laid-back, a little nostalgic and, thanks to Jensen’s influence, a little Scandinavian. Prices are reasonable, shockingly so for a hip eatery headed by ex-Momofuku chefs: $10 for a nice leafy salad with jammy eggs and brown-butter-soy dressing, $6 for a plate of kettle chips with smoked fish and pepperoncini. The real showstopper (and the cover star of our May Best New Restaurants issue) is a filet of sole with a buttery red pepper sauce and hazelnuts, plus brussels sprouts, at $32 – for two people. What, are the prices in 1970 dollars, too? 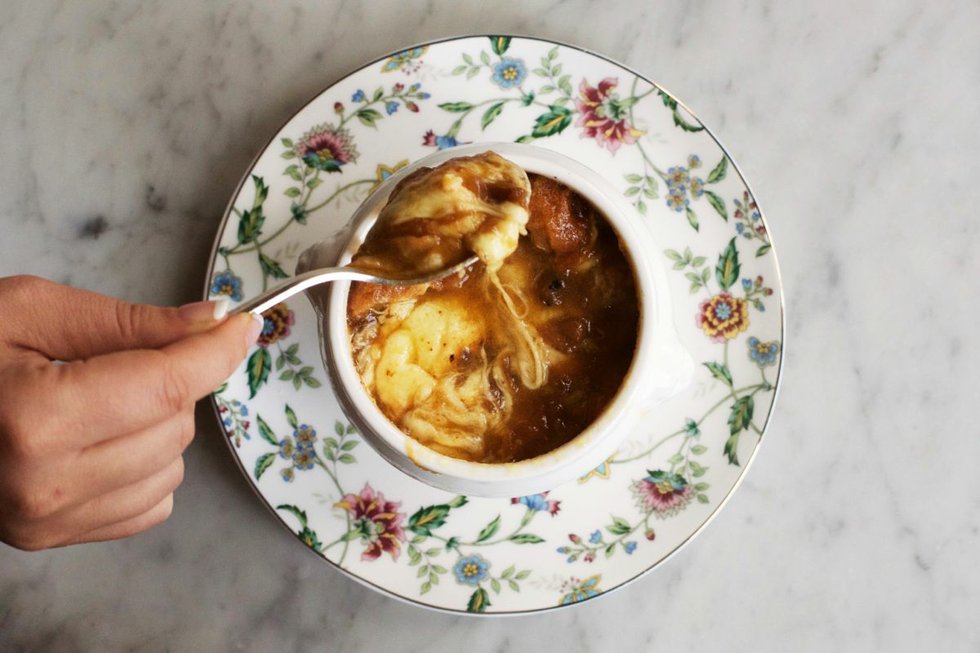 O&B’s bistro opened less than a year ago, but its home has weathered Toronto’s changing tides for well over a century, serving as a single-family mansion, hotel, girls’ school, rooming house (and home to Ernest Hemingway), gay bar and finally, the ground-floor anchor for a luxury rental building. True to its name, the cozy and candy-coloured Maison has a homey yet grand feel, with an aim to act as a hangout for the upstairs tenants (who, presumably, are well-heeled enough to pay for $23 burgers on the regular) as well as anyone hankering for some quality French classics. And on the latter front, chef John Horne hits every last one of his marks with a broad menu full of crowd-pleasers. The French onion soup ($15), simmered until jammy and dense, is a surefire cold-weather classic. And that burger? It’s made from a juicy chuck, blanketed in melted Gruyère and caramelized onions and it’s honestly worth every last dang penny. 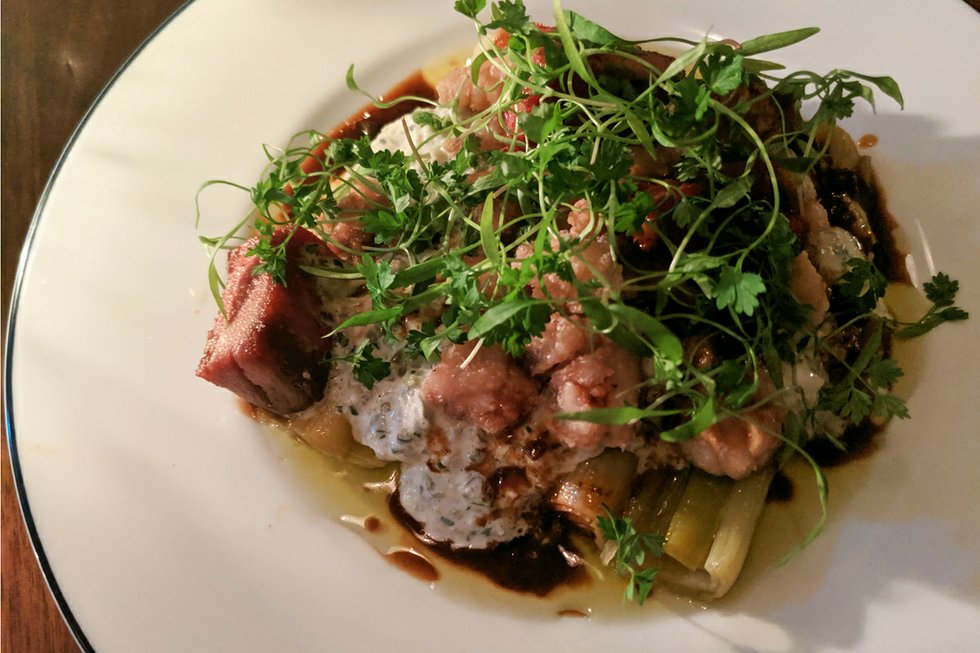 Harbord and Spadina is already home to one boutiquey French eatery – but while Café Cancan is a macaron-hued little jewel box of Wes Anderson-esque adorableness, Dreyfus, hidden from the street behind a curtained window, feels like a rustic secret clubhouse. The menu, from chef-owner Zach Kolomeir (formerly the chef de cuisine at a little joint in Montreal called Joe Beef), is partially an homage to classic French cuisine – peep the vinaigrette-style leeks scattered with crispy sweetbreads and topped with a scoop of sauce gribiche ($23). But Kolomeir weaves in nods to his Jewish upbringing, like serving pommes dauphine with a pile of crema, dill and caviar ($16). Neither of these really explain the $5 mini Cubano sandwiches, but they rule, so who cares? 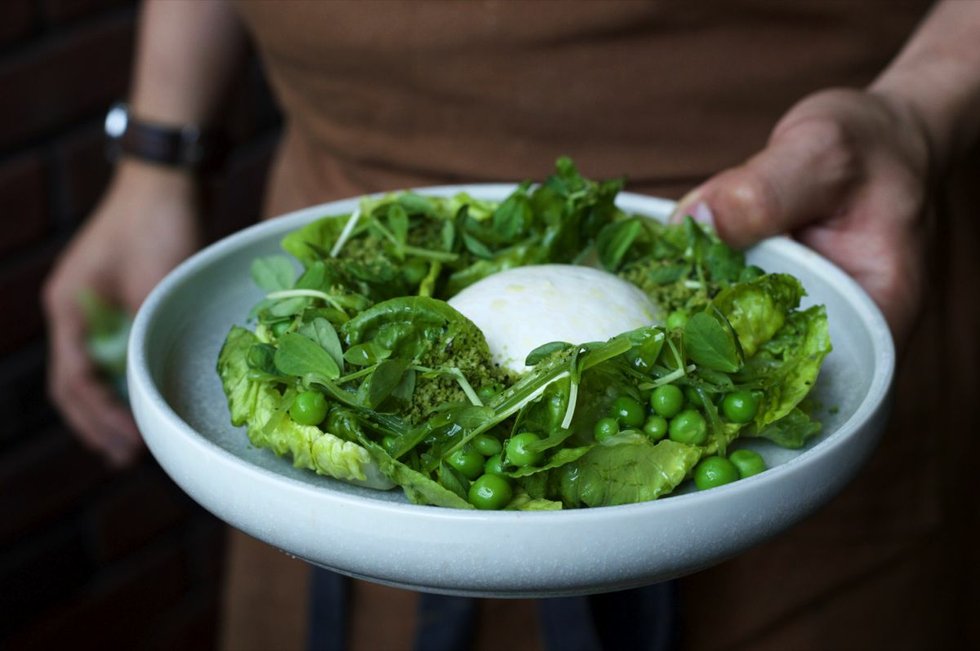 Leslieville’s original Enoteca Ascari, a compact little pasta and wine bar beloved with east-enders, has long been synonymous with under-the-radar local charm – so stepping into the bombastic bright lights of King West might seem like a bit of a sudden leap for the brand. But increased real estate meant more room (creatively and literally) for owners Erik Joyal and John Sinopoli and chef Michael Lam, who set about introducing the crudos, carpaccios and meaty mains that Leslieville’s tiny kitchen just can’t handle. The result: a rotating menu that’s recently included gorgeous Australian lamb, old-school baccala, and beautifully plated sea bream in olive oil. And of course, the primi and pastas – like burrata wreathed in seasonal veg ($25) or chewy paccheri with gently funky nduja tomato sauce ($23) – are as fine as ever. 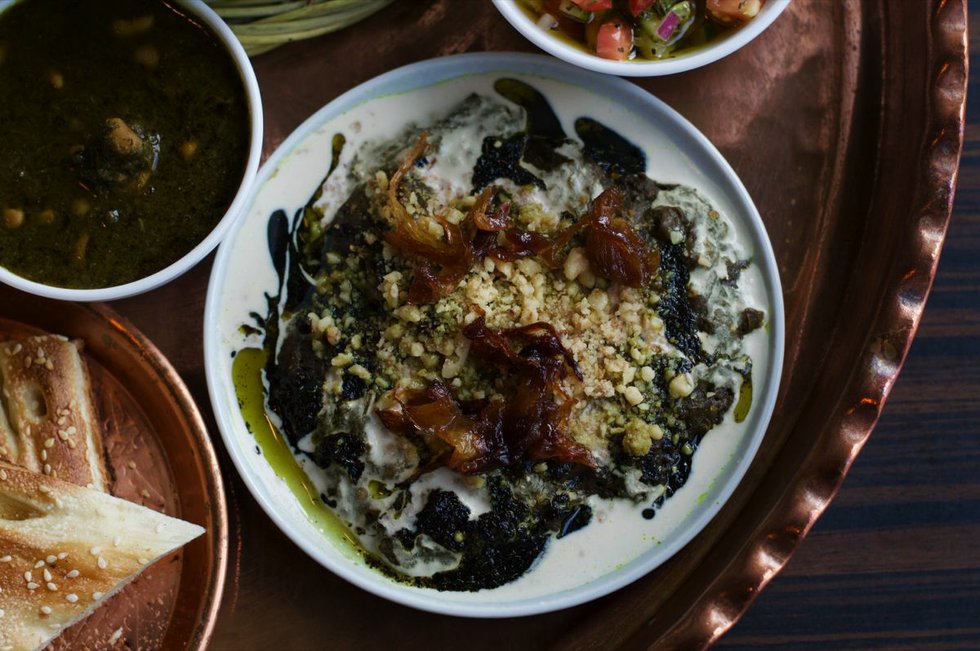 At the heart of Herby is Javad Zahedifar, a home chef-turned-restaurateur hailing from a tiny town in northwestern Iran – which gave the restaurant its name – and his carefully chosen slate of treasured family recipes. At this narrow Danforth kitchen, where the walls are lined with gorgeous photos of Zahedifar’s old stomping grounds shot by his son-in-law, everything on the menu – from soups and stews to roasted meats like the signature veal-beef tava kebab – is fresh, multi-layered and comforting. Dishes like the kashk e bademjan – a dip made of black tahini, white yogurt-based sauce, bronze squiggles of fried onion and lashings of chartreuse olive oil – are a feast for the eyes, too.

Read more: Inside Herby, an Iranian restaurant on the Danforth 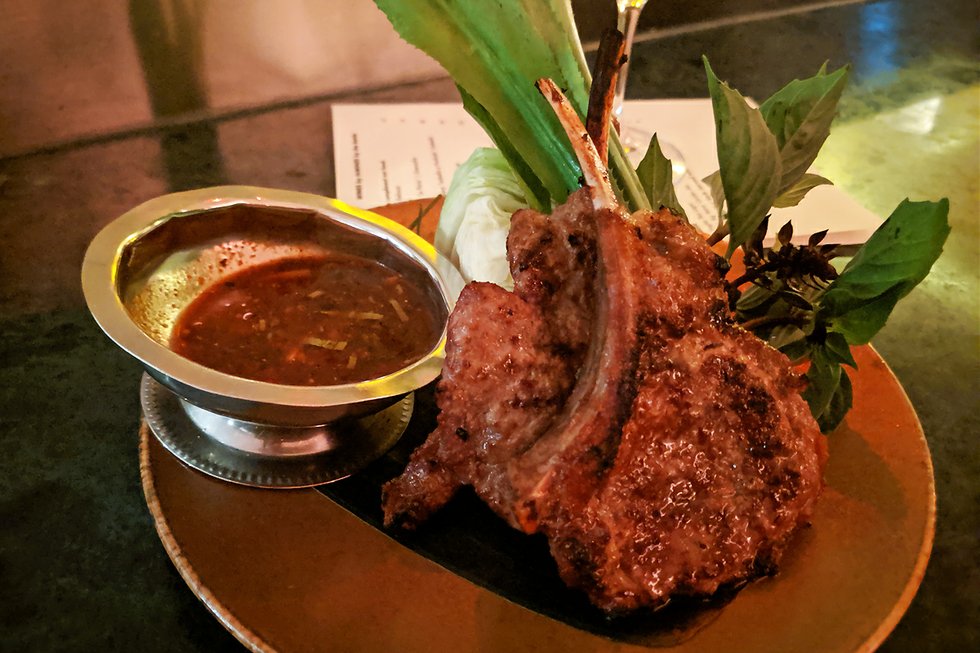 A spot from Monte Wan and Jonathan Poon hidden behind a location of Sam James Coffee Bar (wow, it’s like Toronto restaurant Mad Libs), this trendy wine bar revels in the funkiest, hottest aspects of Thai cuisine. At the heart of the open kitchen, and the menu, is an open grill powered by binchotan charcoal that turns out everything from hen of the woods mushrooms to makrut-laced sausage. Soy- and palm-sugar-glazed lamb chops ($15), served lollipop-style, are a knockout – preposterously tender and smoky and served with a fiery, acidic tamarind dip, plus fresh herbs and crunchy cabbage for wrapping. The PEI scallop curry ($28), served in a slow-simmered sauce, is a tasty conundrum: You only get five of the little suckers, all that punchy sauce threatens to overwhelm their delicate flavour, and once you’re done, you’re left with a lake of broth and rice. (Counterpoint: The broth is still delicious.) Flavours here are huge, but plates tend to be on the smaller side, and sharing is key round up some friends and maybe your roomiest Mastercard. 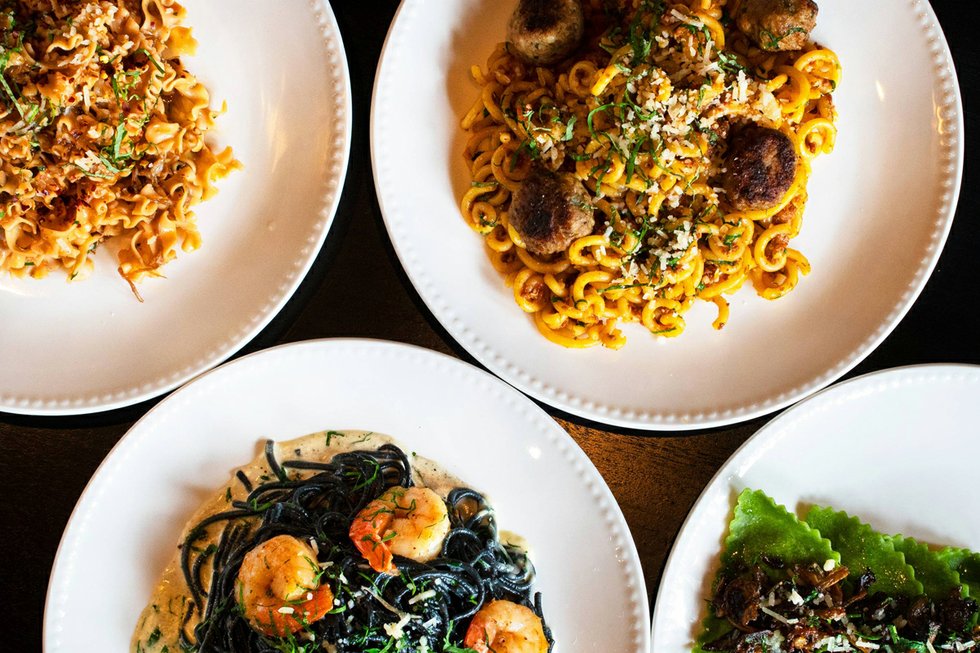 Everyone’s got a “screw this terrible day” lunch of choice generally, mine’s a prosciutto sandwich. But when the storm clouds really roll in, I trudge the eight or so blocks from the office to this modern takeout counter and drown my sorrows in fresh pasta slicked with piping-hot bolognese. But maybe your sadness pasta (or triumph pasta, or ennui pasta) is different. Are you vegan? They’ve got Beyond Meat ragù. Gluten-free? They’ve got short AND long pastas (shapes change daily). Feeling fancy? There’s noods with activated charcoal (which, I guess, is the millennial nero di seppia), plus a cult-favourite crab-and-lobster ravioli. Could your favourite white-napkin joint do it better? Yeah, probably – but prices top out at $15 here, and there’s something to be said for granting yourself a quick little slice of midday luxury.