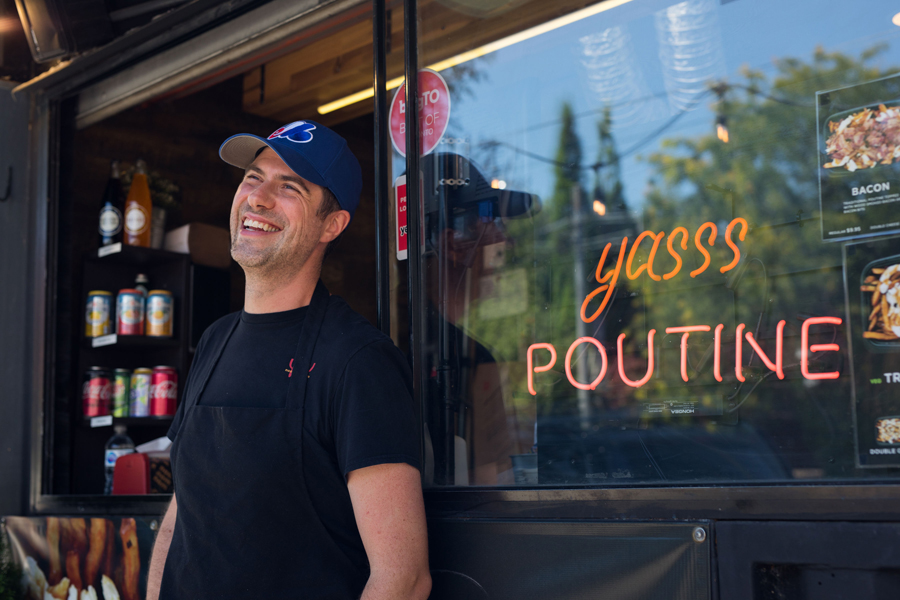 “People from Quebec will come visit and say, ‘What is this?’ Because in French, you’re basically saying, ‘Name name name.’”

But Perreault, a former Montrealer who moved to Toronto in 2008, loved the reference to the Cookie Monster chowing down on his favourite snack. On social media, especially when accompanied by mouth-watering photos, the phrase has become synonymous with ravenous, so-good-you-can’t-speak eating – something Nom Nom Nom’s fans can understand.

After quitting his job as an executive in a large downtown hotel, Perreault decided to pursue his dream of starting a business, figuring that if things didn’t work out he could always return to the hotel industry.

When he read an article about the opening of the shipping container market near Bathurst and Dundas, he decided to bike past and take a look at the setup. He was sold.

“I thought, for $10 a day – which was what they were charging at the start – it was great,” says the genial owner/operator. “The price has risen, plus I have storage needs and rent some other things. Per square foot, I pay a lot, but there’s only 80 square feet. It’s probably the best deal you can get for any retail spot in Toronto.”

Limited power supply dictated the first food he made when he started out in August 2011: crepes. He wanted something to reflect his Quebec background, and figured French crepes were close enough. Once the market stalls could draw on more power, he added poutine two years later. Then gradually he phased out the crepes.

For the first poutines, he did everything – right down to making the cheese curds – because he wanted his food to be as fresh as possible, and he couldn’t reach the minimum number of orders for cheese suppliers. Once his volume increased, he turned to Maple Dale Cheese, outside of Belleville.
When Perreault arrived in Toronto, poutine wasn’t as ubiquitous as it would soon become. Smoke’s had just opened its first location, but Poutini’s – which recently closed – was still a couple of years away.

“There’s a place for everything,” he says of his competitors. “Smoke’s really brought a lot of recognition to poutine in the city, and they do the poutine-eating contest, which also brings a lot of attention.”

He’s proud of his menu. There are several vegetarian options – and his gravy, which he personally thinks is the best part of the dish, is completely vegetarian. There are also halal offerings.

Right after the pandemic hit, he estimates he lost about 70 per cent of business, but it’s gradually picked up, especially with takeout and delivery options. What’s noticeable this summer is the absence of tourists – those who want to tick “eat poutine” off a to-do list. But Nom Nom Nom’s got lots of loyal local fans.

What he discovered soon after opening has remained true. Because he’s the only employee, his overhead is low. He used to worry about taking time off, but now he gives his customers a month or two notice beforehand that they will be without their fries, cheese curds and gravy.

As for working in a small space, an air conditioner and space heater make it livable during summer and winter.