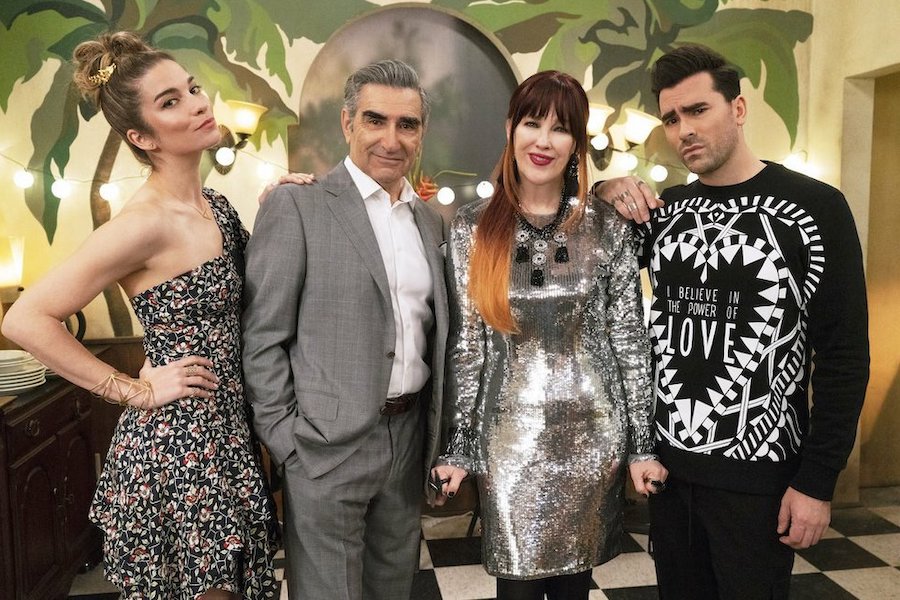 The historic Schitt’s Creek Emmy awards sweep was a win for Canada. But who lost?

“This was supposed to be the Blackest Emmys ever,” said Anthony Anderson during the awards broadcast. He was commenting on the cultural moment and the record-number of Black nominees.

Canada’s historic moment at the Emmys was a barrier to the “Blackest Emmys ever.”

It’s not Schitt’s Creek fault the show is being embraced and celebrated over Black stories. That’s just generally how things go at the Emmys and Canadian television as a whole.

Earlier this year, Kathleen Newman-Bremang surveyed the Canadian television landscape in an article for Refinery29. She noted that Kim’s Convenience, Diggstown, Burden Of Truth and Transplant were the only scripted primetime shows with non-white leads. But besides Kim’s, our most successful shows are white-white: Schitt’s Creek, Workin’ Moms and Letterkenny.

“The wonderful thing about [Schitt’s Creek] is that it’s created by Dan Levy and he represents the LGBTQ2s community,” says R.T. Thorne, the creator of CBC Gem series Utopia Falls. “But in terms of racial and cultural perspectives, Canada has a horrible track record for that.”

“The success of Schitt’s Creek is a net positive for everyone in Canadian media,” adds Amar Wala, a filmmaker and television producer who founded the Racial Equity Media Collective. “It’s proving now that we can make stuff here that resonates internationally.”

But we turn our attention to a tweet from Schitt’s Creek creator Dan Levy himself.

Immediately after winning those Emmys, he pointed out that CBC and Pop TV in the U.S. stayed committed to Schitt’s Creek despite a rough start. The show was given room to grow into a wild success.

“Would we [as in BIPOC creators] be given the same opportunity as those producers were?” asks Wala. “Right now, most racialized producers will tell you the answer is no. I hope that the answer eventually over time becomes yes.”

NOW reached out to broadcasters, creators and execs about the future of Canadian television. They described the challenges ahead, the efforts being made to shift the landscape and the new talent waiting in the wings.

CBC Gem executive director Gave Lindo shuts me down when I wonder whether Canadian TV could nurture a BIPOC-led show to Schitt’s Creek’s success.

“Schitt’s Creek is an anomaly in every sense,” says Lindo, referring to the show’s record-breaking Emmy streak. No comedy has ever won nine Emmys for a single season. And no series, comedy or drama, won all four acting categories in a single season. Lindo agrees with other observers that Schitt’s Creek was likely embraced so enthusiastically because of timing. It was a joyful tonic to the state of the world.

“When you use examples like Schitt’s Creek, which are basically bottled magic, there’s not much that we can learn from it in a way. So many things had to be right in order for it to work.”

Barring rarefied expectations, Lindo, Wala and Thorne have faith in the current shift in Canadian media that has been expedited after George Floyd’s murder. Broadcasters have been called out for either lacking diversity or not supporting the BIPOC voices available to them.

In response, Bell Media established a Content Diversity Task Force, which includes members from BIPOC TV & Film, to affect decision-making when it comes to content. CBC already has the Indigenous-led series Trickster, as well as the second season of TallBoyz, on its fall/winter primetime line-up. Meanwhile, the fifth season of Kim’s Convenience is in production.

And Lindo hints at more exciting developments in the CBC pipeline. But we’ll have to wait a year or two for the results.

One promising new show is the web series Next Stop, which has migrated from YouTube to CBC Gem and has a second season in the works.

Created by Jabbari Weekes, Tichaona Tapambwa and Phil Witmer, the show is about young Black adults in Toronto. Over four four-to-five minute episodes, the characters mull over the city’s talent drain and the perennial argument over which TTC station has better beef patties. The nimble vignettes recall Atlanta, switching up tone and style but consistently capturing a Toronto vibe. The third episode, Duppy, is an especially adventurous, comical and weighted take on unemployment and depression.

“This was done as a labour of love,” says Weekes. “But also boredom.”

Weekes and his cohorts were working at Vice (“a Babylon publication,” he calls it). On the edge of being laid off, they pooled money and poured their creativity into vignettes inspired by shows like Atlanta and BBC’s Ackee & Saltfish.

The work clicked with a small online community and got Wala’s attention. The latter connected the Next Stop team to Lindo, who is among the few Black executives in Canadian television. When watching the 20 available minutes of Next Stop, Lindo immediately recognized a unique voice that spoke to an underserved audience in Toronto.

“If you look at Insecure or Atlanta, what they all have in common is a writer, creator and star who has a very clear vision for the world they’re trying to create,” says Lindo.

He compares the Next Stop team to those creators who know the ins-and-outs of the environments they’re depicting and the people they’re talking about.

“They have a very clear understanding of that world. They’re able to build characters and create an experience for the audience that feels real.”

The texture of Toronto life comes through in the details and banter. In “Pool,” a comical episode where three young people in the back of an Uber argue over whether the grass is greener south of the border, you can feel the misery of Toronto: that sense that all the talk about opportunity and success doesn’t apply to the city’s Black talent especially.

Lindo was sold on the first episode about Jamaican patties, Beef, in which the characters compare what’s on offer between Islington and Warden subway stations.

“I used to take the subway to Islington all the time,” says Lindo. “As soon as you get off the train there’s this massive whiff of Jamaican patties.”

On a Zoom call with fellow Scarborough natives myself and Wala, Weekes gets into how much he packed into Beef’s four minutes. The episode suggests the frustrations of apartment hunting in an unaffordable city like Toronto. Through the patty debate, the episode taps into the east end vs. west end argument familiar to many living on opposite sides of the 404. (He sneaks in a “Fuck west end,” for present company.)

The first season of Next Stop has just been added to CBC Gem’s library. Wala’s company, the aptly named Scarborough Pictures, will produce the second season for Gem, which Weekes and his team are writing now.

Next Stop’s specific Toronto-vibe can exist on Gem because there’s less pressure for it to be widely appealing.

“Television is a bit different because you really do need a broad appeal to a mass audience,” Lindo explains. “That’s what’s called broadcasting. In the streaming universe you are able to be more targeted to particular communities and particular audiences. You can continue to tell stories that may not necessarily be for everyone, but will be hyper-serving a particular audience that’s interested in that content.”

If we care about the future of Canadian television, we should want shows like Next Stop to find mass appeal and exist on the same level as Schitt’s Creek or CTV’s Transplant. To do that, Canadian broadcasters must overcome this notion that content can’t offend their straw man demographic.

At CBC, I’ve heard this essential audience member referred to as “Sally from Sudbury.” In her article at Refinery29, Kathleen Newman-Bremang cites “Suzy from Saskatchewan” as the name given to an imagined demo at CTV.

“This default position of the audience being an older white person is probably true,” says Wala. Though he points out that there’s no data to back it up since privacy laws in Canada prevent companies from collecting personal information related to race and gender.

“There’s no reason for you to believe that you can’t develop a relationship with new audiences. Particularly in Canada, young racialized people tend be really loud, really loyal and the arbiters of what is cool in this country. We haven’t seen a consistent or honest effort from broadcasters to speak to that audience.”

R.T. Thorne adds there’s very little spent on advertising, marketing and promotion on Canadian movies and TV programs, which sets too many projects up to fail. He says the country has a track record of withholding marketing dollars until the product is already a hit. And the marketing is far too old-school – billboards and bus-stop ads – to develop an audience.

Thorne suggests the Canadian television industry take a page from Issa Rae’s playbook. The Insecure creator and star, who started out on YouTube, thought outside-the-box and pounded the pavement to develop an audience. Rae went on a college tour across the U.S., promoting her web series Awkward Black Girl and built the base that would help make Insecure a hit.

“There’s no reason we can’t make an Insecure, Black-ish or a Lovecraft Country,” says Thorne. “Show up if you’re really about it.”