Even buried under prosthetics and makeup, Jessica Chastain is exceptional as disgraced televangelist Tammy Faye Bakker in this solid biopic 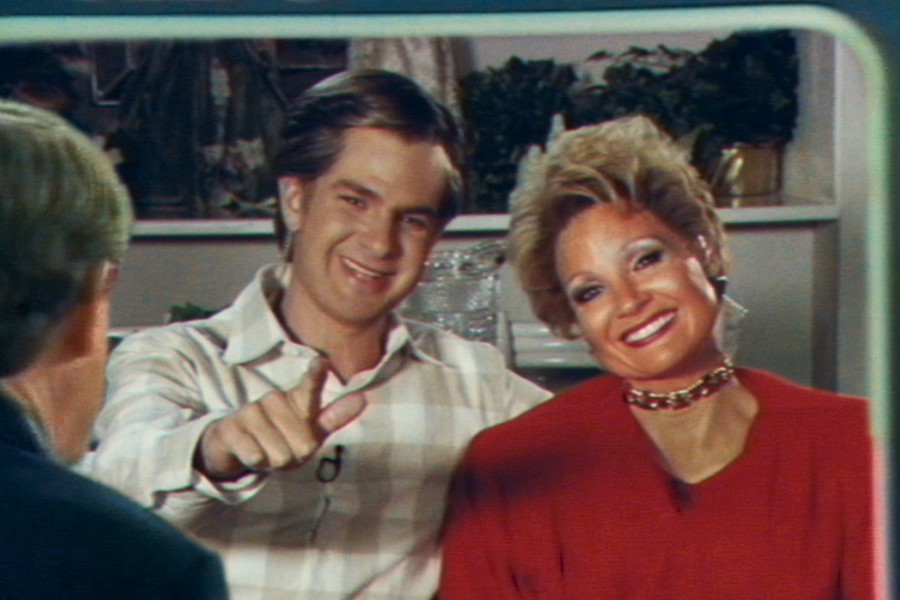 Andrew Garfield and Jessica Chastain as Jim and Tammy Faye Bakker in The Eyes Of Tammy Faye.

I would not have expected Jessica Chastain to give one of the most heartfelt performances of her career buried under several pounds of latex and rhinestones, but here we are, and here is The Eyes Of Tammy Faye. If you’re looking for an unlikely People’s Choice award contender, this is it; Michael Showalter’s docudrama has both the buzzy hook of a celebrity transformation and a quietly compassionate perspective that makes a studio picture feel like a treasure.

It’s also quite moving, which is not something I would have expected to say about a dramatized version of the life of televangelist Tammy Faye Bakker: not because she’s unworthy of emotional consideration, but because I’m familiar with the story, having lived through the media frenzy over the collapse of Jim Bakker’s Praise The Lord network and Heritage USA theme park amidst a flurry of scandals in the 80s. I’ve also seen the sympathetic 2000 documentary by Celluloid Closet filmmakers Randy Barbato and Fenton Bailey, who pushed past the camp iconography surrounding their subject to reveal a woman who, for all of her theatricality, sure seemed like the only star on the PTL Network who understood the message of that Jesus guy.

As the Reagan Revolution energized Jim Bakker to preach his prosperity gospel and Pat Robertson and Jerry Falwell raged at liberals, gays and feminists, Tammy Faye was the one talking about helping the poor, loving your neighbour no matter who they might be, and refusing to condemn people with AIDS and instead introducing them to the millions of viewers in her audience. Late-night media mocked her makeup and wardrobe choices, but both versions of The Eyes Of Tammy Faye see them as the armour they clearly were.

The documentary is credited as source material for Abe Sylvia’s screenplay, which takes the standard biopic approach to Tammy Faye’s life, moving chronologically (and conventionally) through a rags-to-riches, rise-and-fall narrative. It’s the way the film tells that story that feels unconventional: a Tammy Faye Bakker movie could easily tilt into the grotesque, inviting the audience to laugh at Jim Bakker’s pompous self-righteousness as he builds his broadcast empire on fraud and false piety. Instead, we’re watching him through Tammy Faye’s eyes, and the film becomes a story of a true believer who put her faith in a snake-oil salesman.

That dynamic alone, as played out by Chastain and Andrew Garfield – who gives Jim Bakker an easy smile that masks a cruel sneer – would make The Eyes Of Tammy Faye a compelling domestic drama. Framed against the rise of televangelism, it’s also an allegory for the way certain Christian conservatives sold their souls for a mass-media presence.

To get back to Chastain: yes, she wears massive prosthetics and a great deal of makeup for almost the entire movie. She also sings, dances and does funny voices for Tammy Faye’s puppet characters. (It’s the sort of all-in performance that actors do when they want to win awards – look how unlike myself I am! – and I wouldn’t bet against that happening.)

But Chastain also achieves that remarkable synthesis between herself and her character – as she did in The Tree Of Life and Take Shelter and The Disappearance Of Eleanor Rigby, and as she does again this week in HBO’s Scenes From A Marriage – that makes it feel as though we’re seeing a living, breathing person on the screen. Her version of Tammy Faye Bakker is going through a tragedy no one else wants to acknowledge. But we can see it. It’s written all over her face.