On their new album, FED UP, Amanda Crist and Carlyn Bezic take restrictive late capitalism and the male gaze and give them a satisfying rock release 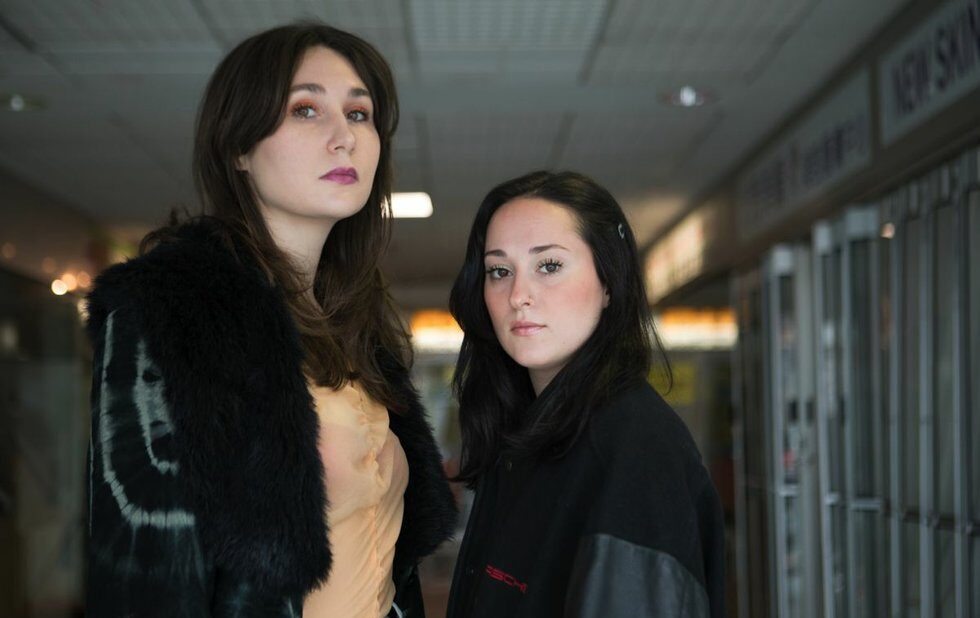 Amanda Crist has just realized we may have ordered too many dumplings. Reams of bamboo baskets have arrived at our table, each intricately made.

“It takes so much care [to make], those little dumplings,” enthuses her bandmate, Carlyn Bezic.

Dim sum is an apt meal for discussing the Toronto duo’s sophomore record as Ice Cream, considering the care and attention they put into every detail of their music, from the songwriting to the costuming to their photo shoots, music videos and live shows.

With FED UP, which the band recently self-released, they muse on being women musicians, musical power dynamics, depression and the search for freedom within oppressive systems.

Although those are big philosophical topics, the band sees FED UP as a more personal album than their 2016 debut, Love, Ice Cream.

“In my mind [Love, Ice Cream] was very distant – a little bit cold,” says Crist. “On this one, I think we brought a lot more of our human experience into it.”

The chilly bass, synth and drum machines of their debut felt purposefully restrained. Detached, even. On FED UP there’s a discernible shift. Opening song Bun Roo finds Bezic returning to her six-string roots with a blown-out guitar riff that’s gloriously flashy and expressive – qualities they indulge in throughout the album. Serene saxophone accompanies a number of songs (courtesy of Deliluh’s Kyle Knapp), Bezic adds some dreamy acoustic guitar to Dove’s Cry, and Bezic and Crist both put their strongest vocal performances to tape.

The duo built the songs up using recording software Ableton instead of the lo-fi drum machine and boom box method that defined their early sound. That let them vary the percussion and layer sounds on top of tracks they’d already recorded. Bezic says it’s helped them create a bigger sound and, more importantly, playing over a backing track has given them newfound freedom onstage because they’re no longer tethered to their instruments.

“The performance aspect of our show is very important for the songs and for us as artists,” Crist adds. “Being able to let loose if we want or just walk around.”

Crist studied dance from age three until the end of high school, and it comes across live. She and Bezic move effortlessly across the stage, though they insist no choreography is involved – they’re just responding to one another in real time.

But embracing backing tracks also means opening themselves up to criticism of how “authentic” they are as musicians.

“That idea of authenticity is such a male idea to begin with,” Bezic argues, acknowledging the baggage that comes with playing in a band. “We both really love rock and roll. We both really love pop music. We both love a lot of things that actually didn’t have a lot of space for complex ideas about what it means to be a woman.

“In referencing those things in our music you end up working within these weird stereotypes, but then hopefully breaking out of them or expanding them.”

On Banana Split, Ice Cream tackle that idea head-on. With lyrics laced with winking sexual innuendo, they deliberately position themselves as the objects of male desire that’s often expected of female musicians. It’s a jarring tonal difference from the rest of the record, where the band set their sights on patriarchy and capitalism, systems that exploit women for the benefit of men. But their exaggerated metaphors and breathy vocals seize the power back, playing off expectations and tugging on a leash of anticipation. Live, they take the feeling of being watched and turn it around, staring directly back at the audience. It’s an intentional confrontation – a feeling they both love.

“When I’m performing [that song] I feel really strong. I feel powerful,” Crist says. “Knowingly putting yourself in front of a bunch of people [while performing sexually charged lyrics], they could easily have all the control. But it is just a mindset that you choose, and you can say, ‘No, actually this is my time.’”

The title track/album centrepiece cuts down that fantasy and reasserts their control (if there was ever any question) – they declare themselves “queens of the void, queens of everything” over sharpened hi-hats. They’re taking all the stress and pressure of everything weighing them down – restrictive late capitalism, the male gaze, modern ennui – and giving them a release.

“I spent the majority of my life just being depressed, and I accepted things that made me depressed as unchangeable,” Bezic says. “[But now] I think anger instead of sadness is actually a really powerful breaking point. I got to a point where I was like, ‘Fuck this. Everything is shit. Let’s be free.’”