As of February 1, more than 50 tenants living in a Parkdale high rise are withholding their rent cheques to protest what they’re calling an unfair above guideline rent increase.

Fifty-five tenants at 1251 King West are participating in the rent strike against their landlord Nuspor Investments, which plans to increase rents by 3.4 percent. The 2018 guideline set by the province is 1.8 percent.

Nuspor is claiming the above guideline rent increase is to cover costly upgrades they’ve completed in the 14-storey building, which include lobby renovations, landscaping, new garbage disposals, as well as new paint and carpeting in the hallways.

However, Mark Farquharson, one of the tenants organizing the strike, says making the tenants foot the bill for those renovations is unfair, especially since their own units are being neglected. He says some tenants have cockroaches in their units and the windows desperately need to be replaced.

“The building is 50 years old and the windows are original,” Farquharson says. “Our apartment is so cold in the winter that we have three floor heaters. We have to turn on the oven and leave it open.”

In their application to the Landlord and Tenant Board seeking the rent increase, Nuspor claims they spent around $296,935 to renovate the lobby, which included $2,000 on framed modern art.

“We don’t think it’s fair they’re not touching any of our units and yet they want us to pay for their beautiful lobby,” says Farquharson.

This morning (February 2), tenants protested at the Landlord and Tenant Board as Nuspor presented their application. At the meeting, tenants stuck to their demands and the hearing was adjourned, which Farquharson says will now give them more time to build their case against Nuspor. 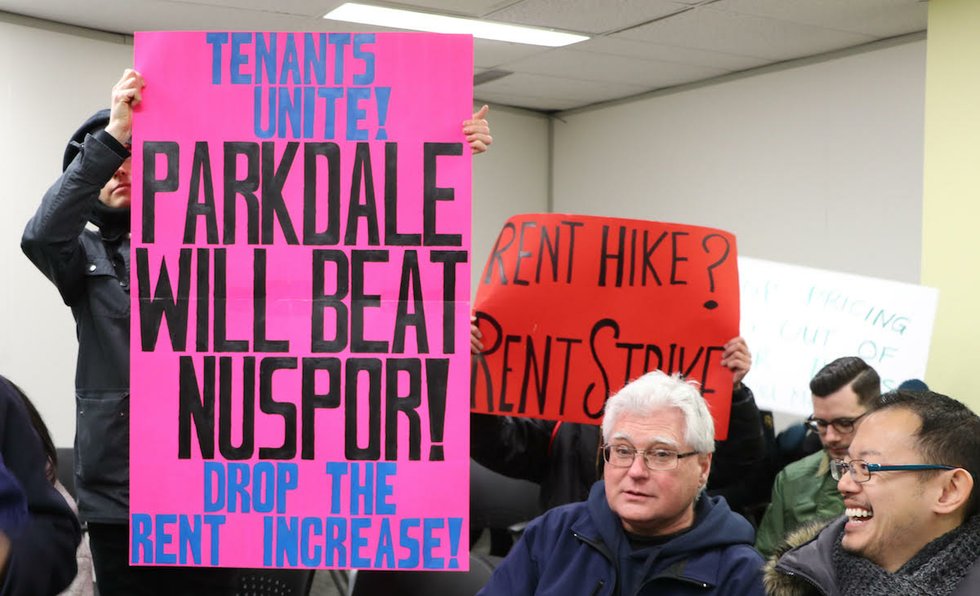 Tenants at 1251 King West protest at the Landlord and Tenant Board meeting.

Farquharson, who has lived in the building for four years with his wife, says the successful rent strike against another Parkdale landlord, MetCap Living, inspired him to organize with his neighbours.

At the height of the three-month strike from May to August 2017, around 300 tenants in 12 buildings across Parkdale withheld their rent when faced with an above guideline rent increase. Similarly to Nuspor’s application, MetCap claimed the increase was to cover pricey renovations, while all the while work orders from tenants remained unfulfilled. Eventually, MetCap negotiated with the tenants and reached an agreement where the above guideline rent increase was substantially reduced.

Steve Love, a MetCap tenant who participated in the strike last year and a volunteer with the grassroots group, Parkdale Organize!, says above guideline rent increases is a trend that’s sweeping Parkdale.

“These rent increases displace the current and long-term tenants, people who have lived here for decades,” says Love. “Condominium developments are moving westward right up to Dufferin and landlords are seeing an opportunity to get a return on their investment.”

Yet despite concerns around displacement and gentrification, Love says the MetCap victory has given rise to a sense of empowerment in Parkdale residents.

“Parkdale is fed up. We have to stand up for our neighbours and do it ourselves” says Love.