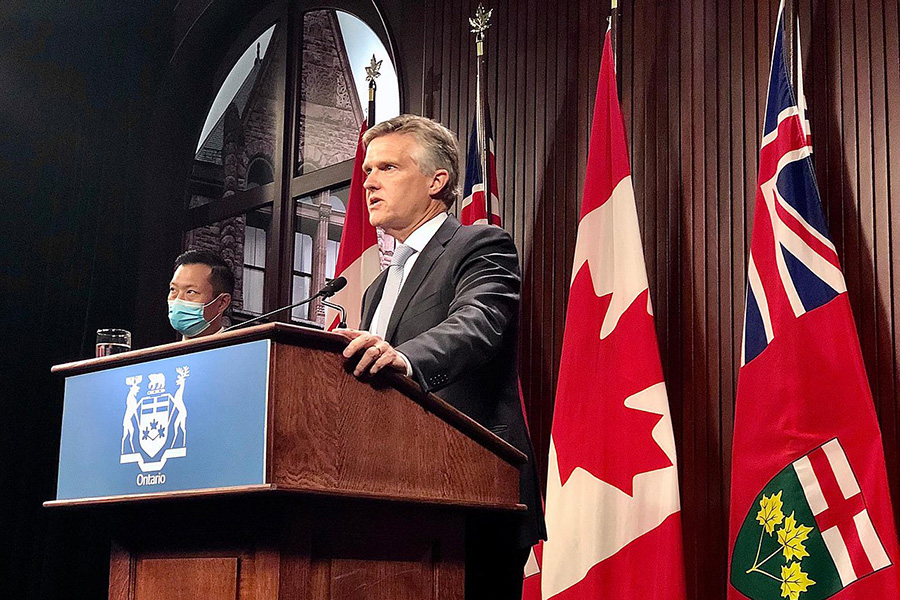 Rod Phillips is bailing. Doug Ford’s minister of long-term care (and finance minister before that) has announced he will be resigning his cabinet seat and not seeking re-election in June.

Phillips made the surprise announcement in a statement released on Twitter Friday afternoon, when presumably fewer people would be paying attention. He did not cite any reasons for his decision, not even the usual “personal” grounds typically offered in such circumstances.

It’s worth noting that Phillips’s name has come up in the rumour mill among potential candidates considering a run for mayor of Toronto, but that’s only should John Tory decide not to seek re-election. While he represents Ajax, Phillips actually lives in Rosedale and boasts many corporate connections from his days at Goodmans LLP on Bay Street.

But while the reasons remain vague, Phillips’s exit is a huge blow to Ford, who now finds himself without a key influence in the cabinet as another wave of the coronavirus is spreading.

Phillips’s statement thanked supporters and recognized Ford’s “strong leadership,” saying that the premier “has always put first what is best for the people of Ontario.” Many would disagree with that appraisal, perhaps even Phillips, privately.

Indeed, it’s tempting to view his sudden departure after serving only one term in office and being widely viewed as a leadership candidate as a case of getting out while the getting is good. No doubt, the now infamous and elaborate cover-up of his COVID holiday to St. Bart’s in 2020 would be hard for any politician to live down. And the NDP, for example, only this week tapped former long-time Ajax mayor Steve Parish to run against Phillips.

But his leaving also suggests that there’s something rotten in Denmark.

Phillips was widely viewed as a stabilizing force in cabinet who is credited with taking the edge off the premier and his penchant for making knee-jerk decisions. Phillips’s return to cabinet last June after being banished for a short time following the embarrassment of the St. Bart’s episode was not only part of an effort by Ford’s handlers to reset the government’s agenda, but to put a more competent face on the administration.

Now, his departure comes at a time when the government seems to be in disarray amid another wave of COVID-19, and as a string of bad decisions related to pandemic response are coming to a head. Besides the disarray over the reopening of schools, COVID outbreaks have also been recorded in more than half the province’s long-term care facilities. Former Stephen Harper attack dog Paul Calandra, who has a political reputation for being a professional obstructionist, has reportedly been named as Phillips’s replacement. The Greens and Liberals are calling on Ford to bring in the army.

Meanwhile, Ford has been MIA, out of the public eye and seemingly out of touch with government efforts to rein in an Omicron variant that’s wreaking havoc on the health-care system. It’s all beginning to resemble the reign of error of his late brother and former Toronto mayor Rob Ford, who was absent for huge stretches at a time and seemingly unable (or unwilling) to attend to the business of government. The premier has similarly been out of the loop every time disaster has struck, raising questions about his competence and commitment.

After a bump in the polls following staff changes in his office last spring to gear up for next June’s election, Ford’s approval ratings are once again sliding in the wake of his government’s mishandling of Omicron. In fact, one poll released this week puts the Liberals – who were decimated in 2018 and don’t even enjoy official party status in the Legislature with seven seats – slightly ahead of Ford’s PCs at 36 per cent.

Phillips is not the only high-profile caucus member to announce he won’t be running. Jeff Yurek, Ford’s former environment minister before he was shuffled out of cabinet, announced on January 7 that he won’t be seeking re-election.

Five other sitting PC MPPs, including Scarborough Centre’s Christina Mitas, another one-term member, have also announced they won’t be running. Mitas cited the arrival of her third child as the reason. But she has also clashed publicly with the premier over vaccinations and the government’s lockdown measures last spring over its restrictions on outdoor activities.

While the Ford government’s pandemic response has alienated a small but vocal rump of anti-vaxxers in his caucus and led to their departures, others have been allowed medical exemptions.

As a consequence, the 76 seats won by Ford in 2018 have been whittled down to 69, which puts the government perilously close to the 63 seats required to hold on to a majority in the 124-seat Legislature.

MPPs in the opposition benches have been saying privately that keeping Ford to a minority next election would be considered a victory. Phillips’s abandoning of the ship puts them one seat closer and may signal others to come.