The Bentway busts out in a big way 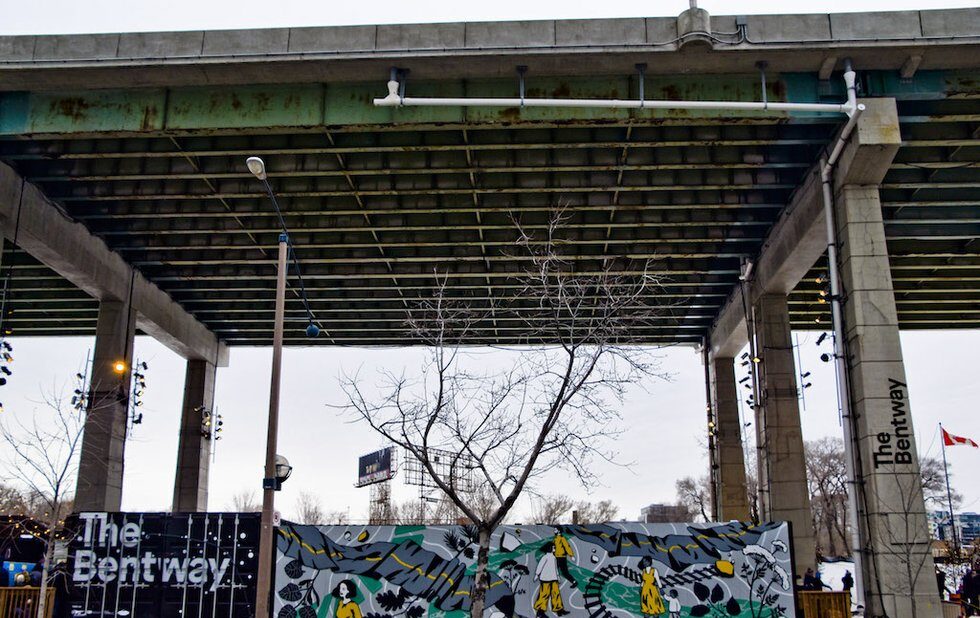 Constructions Of The Everyday by various artists, is The Bentway’s inaugural art exhibition. This is Re-Route by Jennifer Ilet.

It’s not a Yellow Brick Road, it doesn’t lead to Oz, and it’s not yet a kilometre long, but the first phase of The Bentway – The Bentway Skate Trail opened this past weekend – promises to be the beginning of a pedestrian highway to the city of tomorrow.

“In this amazingly heterogeneous city what is extraordinarily important is common ground, where all of us who are so different rub elbows and see each other not through the windshields of cars, but on foot, doing things together, where we play back to Toronto the city that we’re becoming,” says urban designer Ken Greenberg.

In 2011, Greenberg looked east from the Strachan Avenue rail bridge into the intestine of that great, unloved concrete centipede, the Gardiner Expressway, and had an idea to emulate the High Line, the park that runs atop a disused elevated rail line in Manhattan. Only his vision imagined a path, not on top of the Gardiner, where the car is still king, but a “central park” under it, where there was nothing but a river of rubble.

Greenberg had already been asked by Judy Matthews (a former Toronto planner whose legacy includes the Toronto Music Garden and the revitalization of St. George Street) and her husband, investment banker Wil Matthews, to suggest a ground breaking project related to public space. When he took them for a walk under the expressway, they were sold and offered to back it with $25 million.

Six years later, Project Under Gardiner, as it was known, has a new name, chosen by an online ballot so contentious, it was tainted by attempted vote rigging. It’s now The Bentway, inspired by the 510 bents, the concrete trestles on which the expressway rests, and the first part of it is nearing completion.

Julian Sleath, CEO of The Bentway Conservancy, says it will create “a space for sharing and exchange” by linking local neighbourhoods Fort York National Historic Site and its nearby neighbourhoods, west to  Exhibition Place and Ontario Place (with its bridge over Lakeshore Boulevard to the waterfront) and east to the Rogers Centre and the CN Tower. As well as a trail that will be accessible to all, there will be year-round activities and events, including gardens, markets, art, exhibitions, theatre and music as well as recreational amenities. 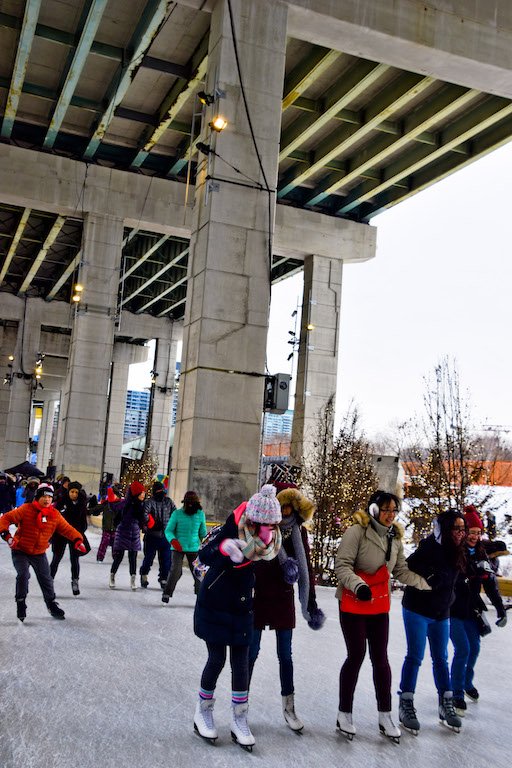 The Bentway Skate Trail is a step toward providing the kind of amenities aspiring cities need.

The Bentway is just 10 minutes walking distance from the homes of more than 70,000 people, 2,500 of them children.

This is a population that’s growing fast and mostly living vertically in condos where no one has a front or back yard, as Judy Matthews remarked when she cut the ribbon to open The Bentway’s 220-metre figure-8 skate trail on Saturday, January 6. The Bentway, she said, is a step toward providing the amenities cities need if they are to be counted as cities.

The Bentway, which is actually part of Fort York, is also called the Wharf to remind us that, when Fort York was built more than 200 years ago, this was the shore of Lake Ontario. Stepping down from Strachan, the Wharf’s launch pad will be a Garden Amphitheatre. With room for 800, it’s bound to revive memories of the much-missed forum at Ontario Place.

North of the amphitheatre, a disused line of the Grand Trunk Railway tunnels west under Strachan into Exhibition Place, where seven enclosed bays of the Gardiner are currently used for storage and vehicle refuelling. Greenberg and Sleath would like to turn those bays into studios, workshops and galleries to bring innovation and year-round purpose to the Exhibition grounds.

They would also like convert the fenced-off triangle of wasteland wedged between the Gardiner west of Strachan and the rail tracks into “Strachan Green” that might contain a skateboard park far enough away from where people live to let it rattle and roar.

Public art has already arrived in Olivier Bonnard’s mural, Love Letters To The Great Lakes, where native red-sided dace swim through fronds of invasive water plants beneath a polluted surface. But there’s hope in this underwater dreamscape. Eggs of the endangered fish glowing on the lake bed tell us that, for now, the lake is still alive.

Further east, past the weathering steel ramparts of the Fort York Visitor Centre, The Bentway’s winter opener, Constructions Of The Everyday, by a number of artists, celebrates “beauty in the materials, routines and structures of everyday life” where the grandeur of the Gardiner soars at its highest and brightest. 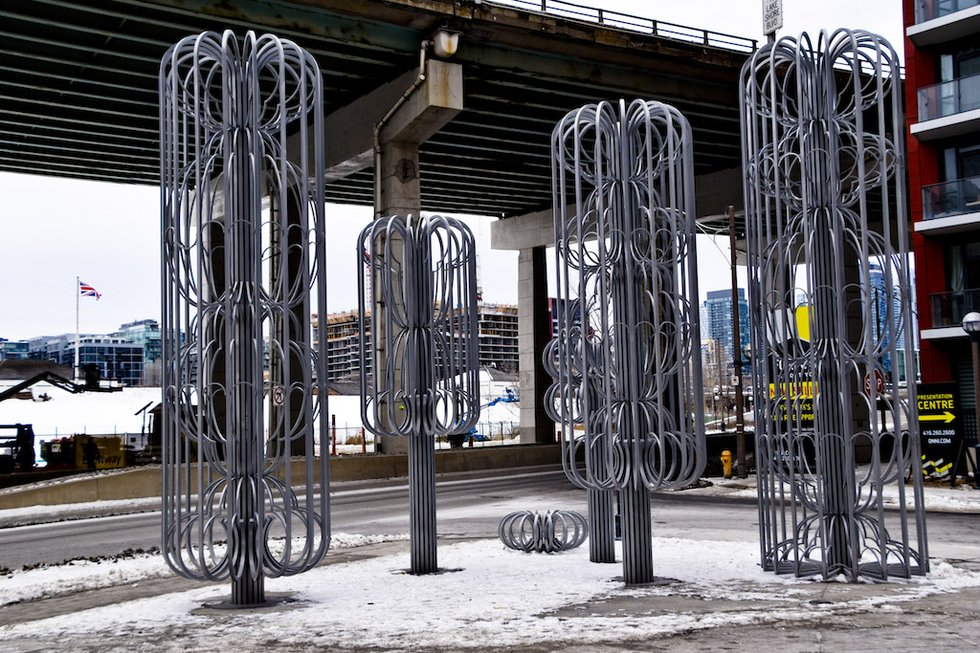 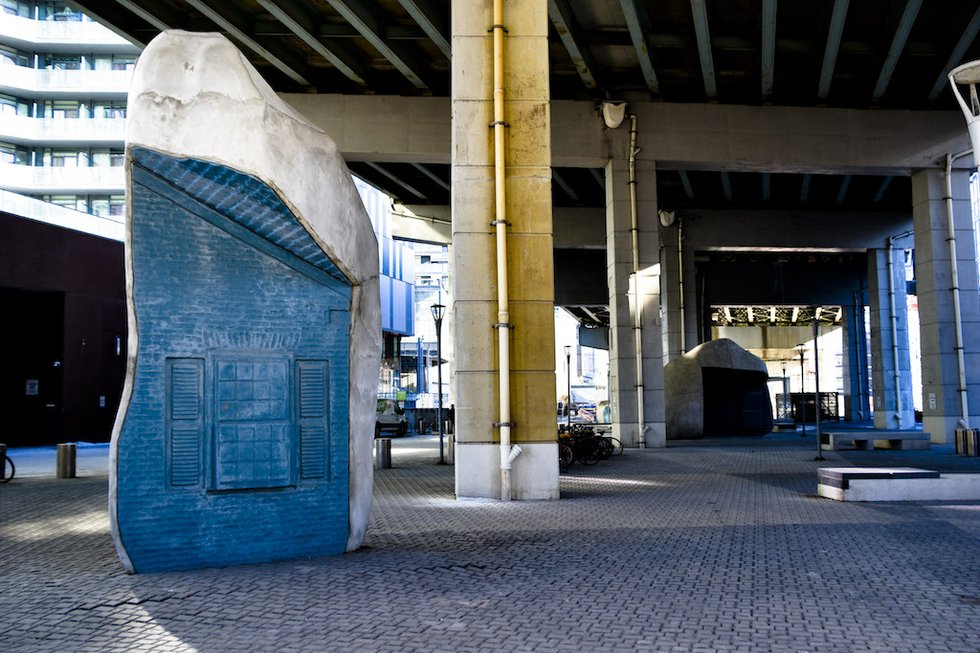 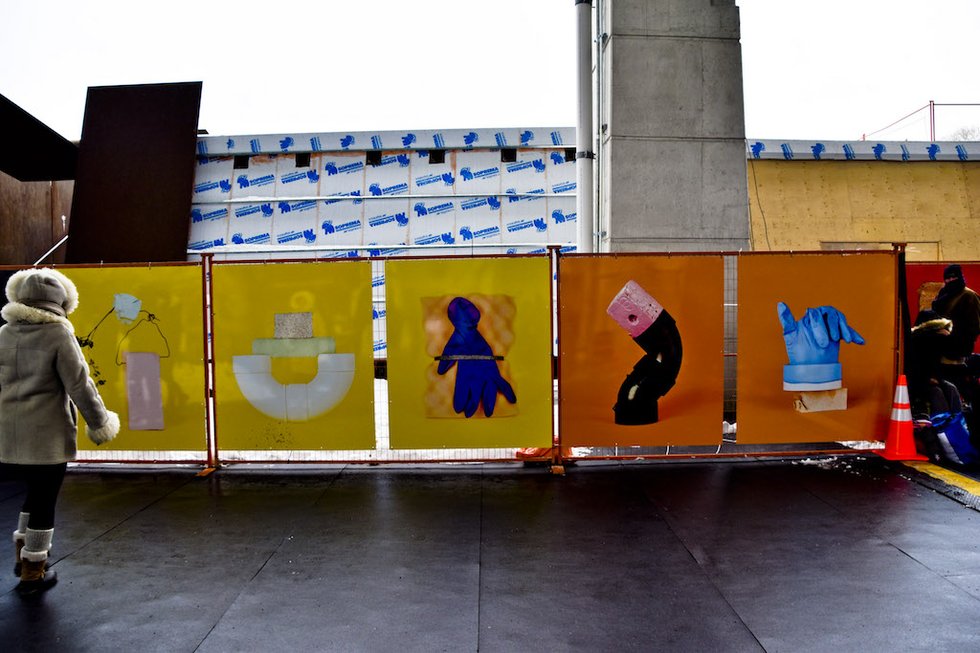 South of the present end of The Bentway, there’s already Fountaingrove by Carlo Cesta and Nestor Krüger, above buried Garrison Creek. And across Fort York Boulevard, which The Bentway will eventually cross by a planned pedestrian and cycle bridge, are Adad Hannah’s Yard Stones, gigantic rocks with blind windows and doorways, surreal objects that look like they were inspired by René Magritte.

At Dan Leckie Way, southwest of City Place, Pierre Poussin’s Mitosis Courtyard marches above a rock pile on its way towards Spadina.

Beyond Spadina? Sleath’s ambition is as broad as the expressway is long. Given the funding, he would run The Bentway east and west, beneath its entire elevated section, from Exhibition Place to the Don Valley Parkway.

Toronto is the only Canadian member so far of the High Line Network, which consists of 19 North American cities transforming underutilized urban infrastructure. It’s a movement that excites Greenberg, who says he wants the Bentway “to become a vital connection between the downtown core and the lake.”

It’s already happening. The Bentway is not alone in making that connection.

By late summer 2018, the stainless steel arches of the Garrison Crossing bicycle and pedestrian bridge will swoop north out of Fort York. Its first arch will land in a new park at the tip of Garrison Point, where the rail tracks flow on either side of it.

Its second arch will land south of Stanley Park on Wellington West. The Bentway and Garrison Crossing will make Fort York the hub of a network of communities, old, new and not yet built, and connect it to the city like never before.

Stephen Otto, founder of Friends of Fort York, anticipates The Bentway’s “runaway success” where construction was once forbidden within cannon-shot range (one mile) of Fort York’s ramparts.