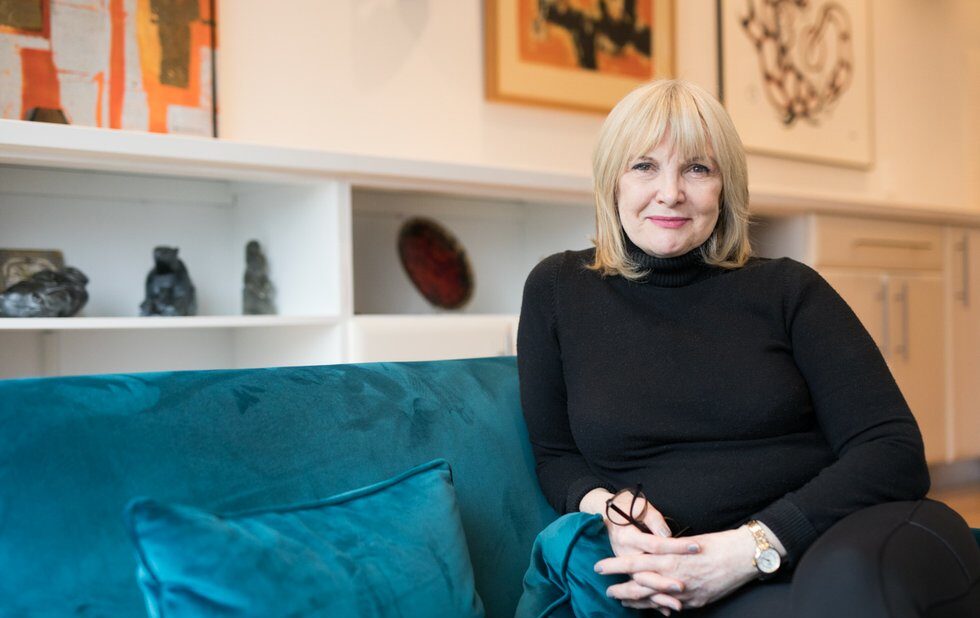 Cheryl Hawkes is suing the city and Uber Canada for negligence over the death of her son Nicholas Cameron.

The city of Toronto and Uber Canada have been hit with a $7-million lawsuit over a car crash that claimed the life of 28-year-old Nicholas Cameron nearly two years ago.

“Nick was killed under a system that didn’t care,” says his mother, Cheryl Hawkes, who believes the city’s approach to regulating ride-hailing companies like Uber led to her son’s death.

Hawkes is a co-plaintiff in the suit with her late son’s girlfriend, Monika Traikov, who was riding with Cameron in an Uber on the Gardiner Expressway when they were rear-ended. Cameron suffered life-threatening injuries and died the next day.

According to the 24-page statement of claim filed in Ontario Superior Court on February 24, Hawkes and Traikov are each pursuing $3.5 million in damages plus expenses. The statement accuses the city of negligence, breach of statutory duty and abuse of public office.

There are six defendants named in the suit: the City of Toronto Uber Canada Uber subsidiary Rasier Operations B.V. Abdihared Bishar-Mussa, the Uber driver involved in the crash Stars Auto Sales, the company that he leased his vehicle from and Joseph Estacion, the BMW driver who rear-ended the Uber Cameron and Traikov were riding in.

The city is included as a defendant because council passed a vehicle-for-hire bylaw in 2016 that scrapped a 17-day taxi driver training program in order to expand vehicle-for-hire services and foster competition. Hawkes argues the rollback of driver safety rules led to her son’s death.

The court filing alleges that “significant lobbying” from Uber resulted in the removal of “training requirements for all regulated vehicle-for-hire drivers.”

The filing claims that Uber assisted in drafting the bylaw, which amounted to “a wanton and outrageous disregard for the safety of the residents of the city of Toronto.”

The suit goes on to state that the city benefited financially from the relaxed rules by collecting a $0.30 fee for every Uber ride in Toronto and colluded with Uber to share the proceeds.

The allegations in the suit have not been proven in court.

A spokesperson for the city reserved comment on the suit because the matter is before the courts. Uber and representatives for the other defendants did not respond to requests for comment as of press time.

With the civil suit, Hawkes wants to hold not only the drivers accountable, but the regulatory framework she says enabled the tragedy.

“My son was killed by something systemic,” says Hawkes. “It was political neglect. It was a compromise that had nothing to do with public safety.”

On March 21, 2018, Cameron and Traikov were headed to the airport for their first vacation together as a couple in a 2012 Hyundai Sonata driven by Bishar-Mussa, who had been driving for Uber for two days.

According to the agreed statement of facts in Estacion’s case, Bishar-Mussar’s phone/GPS fell off the mount on to the floor of the car and he pulled over west of Park Lawn to retrieve and remount it. When he attempted to slowly re-enter traffic, the car was immediately rear-ended by Estacion’s BMW. The Hyundai was propelled across four westbound lanes and struck the centre median. Cameron suffered a fatal neck injury.

Hawkes was on a plane from Europe when the accident happened.

“I got a text message from the police while I was sitting on the tarmac waiting to disembark,” she recalls. “I arrived jet-lagged. And I’ve kind of been jet-lagged ever since.”

Estacion was charged with careless driving and acquitted last October.

The suit alleges that Uber Canada failed to test Bishar-Mussa’s driving ability and failed to train him in ways that could have prevented the crash. It also takes aim at the company’s business practices.

“They created a business model which required drivers to use their cell phone while driving, contrary to the Highway Traffic Act,” the court papers state.

Hawkes is seeking damages over the loss of comfort and care she would have received from her son, lost income, expenses related to Cameron’s care and funeral and the impact on her overall enjoyment of life.

Traikov is seeking damages related to permanent injuries and physical and mental impairments – including traumatic brain injury and severe physical pain – subsequent rehab and medical procedures, loss of income, loss of future income and her inability to participate in recreational activities she once enjoyed.

Both plaintiffs say they have suffered severe mental distress.

This is not the first time Uber has been sued over a road death. The company faced a wrongful death suit involving a six-year-old girl struck while crossing at an intersection. On December 31, 2013, San Francisco-area Uber driver Syed Abid Muzaffar made a right turn, killing Sophia Liu. Uber denied legal responsibility in the case, as Muzaffar did not have a passenger in his car, but  settled the suit brought by the Liu family for an undisclosed amount in 2015.

Are the city’s new rules enough?

In the two years since Cameron’s death, Hawkes has fought to get mandatory driving training rules instituted for taxi drivers and drivers for private services such as Uber and Lyft.

In 2019, the city amended the vehicle-for-hire bylaw to improve safety provisions including a minimum of three years experience for drivers and the completion of a city-approved training program.

The lawsuit is landing weeks after the specific requirements for driver training courses were made public. The rules, which took effect on January 1, state that online courses without any in-car defensive driving training will be enough for a driver to take the wheel.

New drivers must provide proof of training by June 1 while existing drivers have until the end of the year.

“I get that online learning is a thing,” Layton tells NOW. “But when you’re talking about public safety in a city that has a program that is dedicated to Vision Zero, shouldn’t we be trying to do a little bit more?”

However, the director of business licensing at Municipal Licensing & Standards (MLS), the office drawing up plans for driver training protocols, disagrees with that characterization.

“I don’t see the program in its entirety ever being completely online,” says Fiona Chapman, adding the rules for driver training are a work in progress.

On February 14, the city released the minimum requirements prospective training schools must meet when presenting plans to an expert panel that will decide in mid-March what programs get licensed.

“What we’re hoping is many of the existing industry partners are just brushing up and adding to their current offerings,” says Chapman, who expects to hear from the schools this month.

Chapman explains that MLS didn’t mandate in-car training because officials want to keep options open and hear from as many schools as possible.

Others see the terms as a concession to Uber.

Layton, who introduced a motion for mandatory driver training, agrees the MLS terms aren’t as forceful as he had initially hoped.

“There was a lot of back and forth with other parties on council to come up with language that we could all support,” says Layton. “The influence of Uber was strong in the council chamber.”

“Sometimes as a civil servant you don’t make everybody happy,” says Chapman, responding to accusations is partial to Uber. “I’m pretty sure the companies are not too happy with us in terms of the requirements. And, conversely, as you’ve pointed out, there are concerns on the other side. I don’t know if that says we’ve struck a balance. We are in the middle of a process. We put out criteria.”

When asked for comment about the new safety rules, a rep for Uber Canada sent a statement via email.

“Uber has been working closely with the city of Toronto on the implementation of new requirements,” the statement reads. “Along with working with cities, we are continuously investing in safety at Uber through our policies, practices and the product features we offer on our platform for riders and drivers. When it comes to safety, we’re regularly engaging with regulators and safety experts to advance new policies and iterate on products that help move the needle.”

When preparing the guidelines for driver training, MLS consulted with Centennial College, which runs a one-week driver-training program called Taxi 100. It includes a full day of in-car defensive driving training.

Hawkes feels it’s peculiar that Centennial College was part of the consultation process for the new driver guidelines, but in-car defensive driving is not mandatory in the bylaw.

Hubbard helped develop the program after city council cancelled the industry-funded 17-day training program. All Beck drivers are required to complete the course.

“A lot of people don’t go to school to learn how to drive,” says Earla Phillips, an Uber, Lyft and Facedrive driver who took the Taxi 100 program. “They just study the handbook, pass the test, have a tiny bit of experience on the road and bam! – they have their licence.”

She points out that drivers immigrating from countries that have reciprocal licensing agreements with Ontario (like the UK, France, Belgium, Switzerland and South Korea) can skip local testing altogether.

The city’s new safety criteria will become mandatory on June 1. There’s an added pressure on the city to provide immediate and accessible driver education to ride-hailing drivers already on the road. Chapman suggests that is why the city isn’t ready to rule out online training.

“We have approximately 90,000 licensed vehicle-for-hire drivers in the city,” says Chapman. “The vast majority of them are going to need to participate in training. We’re hoping that there’s a good variety of programs for the drivers to choose from at different price points that work with people’s schedules.”

Layton points out the city has launched the Vision Zero plan to reduce traffic-related fatalities and injuries on Toronto streets. Vision Zero is represented on the panel that will advise on the rules for Uber and Lyft drivers.

“I’m holding out hope that we’ve put together the right experts to say, ‘No, it needs to be more than the bare minimum.’”

“There doesn’t seem to be a lot of political will to really change things,” she says. “It would be a fierce fight with the Uber lobbyists to do that.”