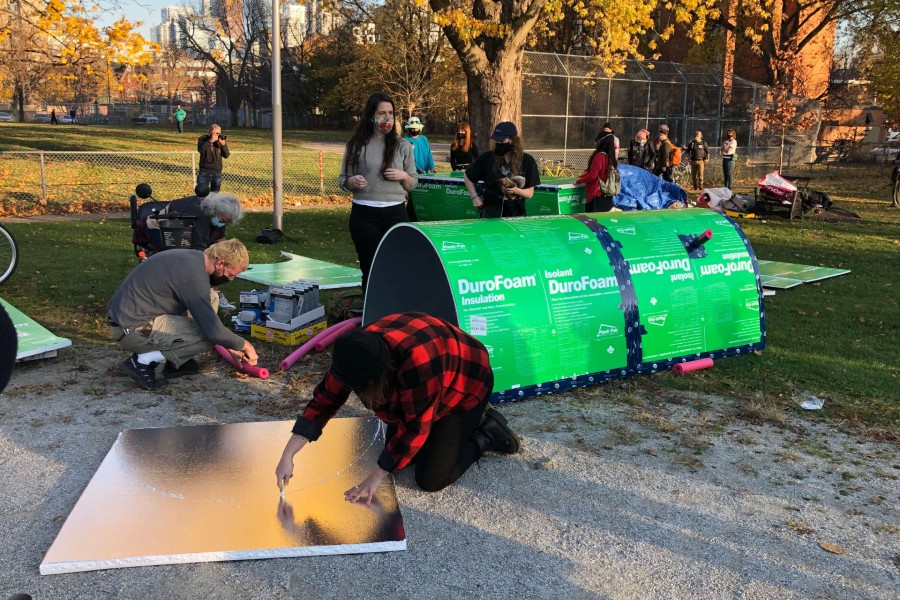 Housing advocates and volunteers build insulated foam domes for people sleeping outside in Toronto on November 8.

While the city released a winter plan that includes 560 additional shelter spaces, housing advocates have countered that it isn’t nearly enough to accommodate the over 1,000 unhoused people.

Toronto also continues to shut down encampments, which many feel is the only safe alternative for people unhoused during the COVID-pandemic.

Meanwhile, tenant advocates have been holding eviction rallies. They say the Landlord Tenant Board has proceeded with hundreds of eviction hearings in recent weeks. Another rally is set to take place on Sunday afternoon (November 29).

“The obvious public health risk posed by mass evictions under #COVID19 is that once tenants are evicted people are forced to move in with family members and friends,” Cole Webber, a community legal worker with Parkdale Community Legal Services, said on Twitter.

During a COVID-19 modelling projection update on November 26, Adalsteinn Brown, dean of the University of Toronto’s Dalla Lana School of Public Health and co-chair of Ontario’s COVID-19 science advisory table, said the province is seeing a steep rise in infection levels in areas with the lowest percentage of suitable housing – i.e. crowded housing conditions.

Public health officials have observed this trend in both the first and second waves, he added.

“These are long-standing structural factors… that drive these much higher rates of infection,” he said.

A provincial moratorium on residential evictions during the pandemic ended in July.

City officials, including Mayor John Tory and Toronto Board of Health Chair Joe Cressy, have called on the province to reinstate the residential eviction ban now that Toronto is in a 28-day lockdown period.

We spoke with three people in Toronto attempting to navigate the temporary housing situations during the pandemic.

“This is my home”

Domenico Saxida has been in a park encampment at Scadding Court for over a year and has experience living in a shelter. He never wants to go back. He says shelters feel unsafe and are vulnerable to stealing and fighting. At the encampment, he feels a sense of community and family.

“We all look out for each other here,” he says. “We make sure that people clean up after themselves. We make sure that no one messes around with the residents in the park or causes drama with the neighbours. Everyone keeps their campsite clean. We have rules to follow.”

According to Saxida, his encampment was among the first the city targeted for forced evictions in order rehouse residents in the Better Living Centre, a new 24-hour respite centre.

The design of the facility prompted backlash from activists who argue the glass barriers dividing spaces within the centre do not allow for privacy.

“The city can do its best, but I’m not moving from here,” Saxida says. He grew up and worked in the neighbourhood, and he says he doesn’t want to move away from the community.

“My therapist, my psychiatrist, my dentist, all my medical needs are downtown right in this neighbourhood,” he says. “Why should I live in Scarborough, Mississauga, Etobicoke when this is my home?”

The foam domes include LED lights, air vents, a smoke and carbon monoxide detector and fire safety signage. The structures are intended for encampment residents so they can keep warm this winter. But city officials have said the structures are a fire hazard and must be removed from public parks.

The structures are similar to Scarborough resident Khaleel Seivwright’s Tiny Shelters project, which are small insulated mobile shelters for unhoused people. City officials have also sent a warning letter to Seivwright, telling him to cease production because his mobile shelters are interfering with the city’s plan to move people off the streets.

On November 20, city officials gave verbal notice to encampment residents they would begin clearing three encampments, including Moss Park and Holy Trinity, over the next weeks, activists say.

In response to questions about the choice to evict people from encampments, the city rep said in an email statement: “The City’s goal is to move people inside into safe spaces. Conditions in encampments create significant health and safety concerns for those living outside.”

They noted that “encampments are not cleared until notice has been provided and everyone sleeping on-site is offered a safe, inside space.”

Sarah White is living in a shelter hotel after being moved from an encampment on Park Road at the end of July. She says that, in her experience, there are often city workers coming around telling people to pack up tents, which is why living in an encampment can be tough.

“It wouldn’t be so easy to live in an encampment having to take your tent down and carry it around every day,” she says.

White and the rest of the residents at her encampment were moved to the same shelter hotel. But four months later, White says she is the last one from her group still living there.

“It’s kind of sad,” she says. “A lot of the people are just back out on the streets. One person got housing, but a few people unfortunately have gone to jail for various things.”

White feels thankful to have a spot at the shelter hotel during the pandemic. She’s glad to have her own space and warmth during the winter versus a more typical congregate-living shelter where people are grouped together.

However, she understands why shelters aren’t for everyone.

“Based on previous shelter experience, you can protect yourself a lot better in the encampments. Shelters can be very dangerous,” she says. “If you’re used to having that sort of freedom in an encampment, shelters don’t give you much of that.”

White has been living in temporary housing in Toronto since 2016, and says she’s on a waitlist for long-term housing, but isn’t sure how long the process will take.

“Ultimately my goal would be to get back to work,” she says. “But in order to do that I need a proper roof over my head.”

People living in long-term housing aren’t feeling secure in the city, either.

Hicham Alasbachi is a tenant in a Weston Road building owned by Starlight Investments. He’s been facing eviction since the beginning of 2020. He says he required rent relief that his landlord was unwilling to accommodate.

Alasbachi uses a wheelchair at almost all times, and is a recipient of the Ontario Disability Support Program (ODSP). He’s been living in his apartment since 2018, and says when he moved to Canada, he struggled for months to find a landlord that would be willing to accept a tenant in a wheelchair.

“Not all landlords accept someone in a wheelchair, or someone who wants to put poles in the apartment,” he says.

He likes the area because groceries and other necessities are nearby and easily accessible. But he received notice of eviction in January, and was scheduled for a hearing with the Landlord and Tenant Board in March. The hearing was postponed due to Ontario’s pandemic emergency measures, but Alasbachi found out a few days ago that his landlord is still proceeding with the eviction.

Alasbachi is calling for an eviction moratorium in Toronto along with other collective action groups because he worries he’ll wind up homeless.

“It’s very difficult for someone in a wheelchair to go into a shelter,” he says. “To be in the shelter, you have to be strong and stay safe.”

In an email statement, the city said that though the province is responsible for issues around evictions, “the City is in the process of legally challenging Bill 184.”

Critics of the bill, which became law in the summer, say it makes the eviction process easier for landlords.

Alasbachi also says there are very few shelter spaces available. For him and other tenants who are facing eviction and will be left homeless, the temporary housing situation in Toronto is grim.

Alasbachi says he’ll continue to advocate for an eviction moratorium, and hopes his story is one others can learn from.

“I will keep fighting and I won’t surrender, for myself and for others,” he says.

Julia Mastroianni discusses Toronto’s temporary housing issues in the latest episode of the NOW What podcast, available on Apple Podcasts or Spotify or playable directly below: