The Royal Ontario Museum’s iconic Nisga’a and Haida Crest totem poles have a new companion: a permanent mural created by the ROM’s Youth Cabinet that represents the Indigenous knowledge they’ve learned and pays tribute to a fallen warrior.

In 2016, Kiowa Wind McComb helped form the youth cabinet. Then the Indigenous Youth Intern, the George Brown College student ran the cabinet alongside coordinator Leslie McCue, who also serves as the ROM’s Indigenous Knowledge Resource Teacher. That same year, he was murdered in North York. He was 20 years old.

“Kiowa was such an integral part of making the Youth Cabinet what it is,” McCue tells NOW.

Comprised of 10 to 15 Indigenous and non-Indigenous youth ages 16 to 21, the group learns from visiting guest artists, elders and knowledge keepers and attending Indigenous community events. Every year they compile the knowledge they’ve gained into a final project. Past years’ final projects include an anthology series on Wattpad and a television series on Regent Park TV.

The ROM previously honoured McComb by naming the Kiowa Wind Memorial Indigenous Youth Internship after him, a role that continues to support the Youth Cabinet. The four-panel mural, which was unveiled on October 21, prominently features black horses surrounding a bear, wolf, eagle and deer totem pole, with the horses’ manes blowing in the wind.

The mural and the youth cabinet are among initiatives the museum has undertaken to build meaningful relationships with Indigenous youth and communities at a time when major institutions like the ROM are working to repatriate stolen artifacts and ancestral remains.

The unveiling began with a hoop dance from Nimkii Osawamick and a Prairie Chicken Dance by Lindy Kinoshameg, who performed in front of a crowd that wound up the stairs and around the totem poles. Once the mural was revealed, the group explained some of the meanings within the painting.

“We did get a question about the wind in the hair of the horses, so we talked about Kiowa,” recalls McCue. “I got a little bit more emotional than I thought I would.”

Lauren Lavallee had been dating McComb for two years at the time of his death. She was at the unveiling and was gifted a shawl, a cultural tradition for a grieving person, and only realized the nod to McComb in the mural after McCue explained it.

“We’re not material people, but when we’re gone what’s left is our stories and the legacy of this life we live,” she says. “They’ve done a good job at creating this legacy for Kiowa. There is a beautiful painting and amazing job position. I think they really did him justice because he was a really special person.”

Besides paying tribute to McComb, the horses also serve as a nod to a story the group learned about black horses coming down from the sky to act as protection.

“The horses are standing there to protect all of the visitors that come through the ROM, and they’re also directly across from the totem poles, in conversation with them, but also protecting the ancestral objects in the museum,” explains McCue. 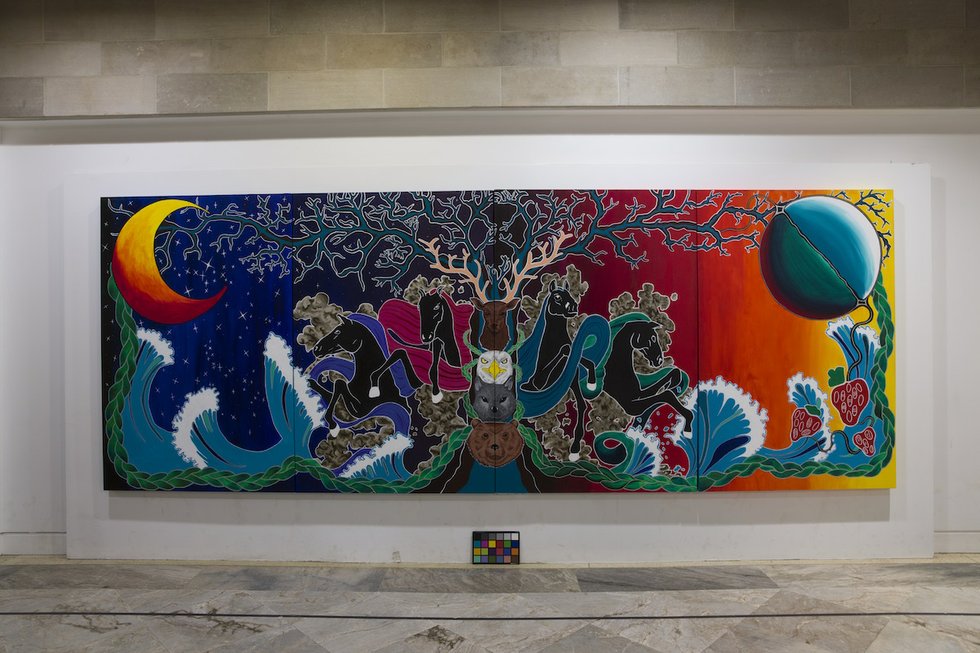 The finished mural went on display to the public on October 21.

A sweetgrass braid borders the whole mural, representing our interconnectedness. The totem pole in the middle comes from the teachings of Jakumeit, an award-winning artist and educator from Vancouver. Other imagery includes branches intertwined to create a medicine wheel at the top, which acknowledges everything in creation.

Jacob Henry, who joined the Youth Cabinet in hopes of meeting new people after moving to Toronto from Wikwemikong First Nations, sketched the mural’s design.

“We had a lot of guest artists come in, and it was nice to get some different perspectives and learn stuff I wouldn’t have had the chance to otherwise – like the significance of the totem poles – from someone who actually knows the culture,” he says.

“It was really strange to see it up there,” he says of the moment the mural was unveiled. “Something that I worked on is hanging in a popular museum, and usually to get that you’ve got to be dead.”

McCue hopes the water pictured in the artwork will prompt visitors to ask questions, so that teachers at the ROM can use the mural to talk about Indigenous issues, like communities that lack clean drinking water.

The subject of repatriation and ownership of Indigenous sacred objects and artifacts is something McCue feels the institution is handling well. The ROM is currently hiring a curator of Indigenous art and cultures and repatriation work is happening behind the scenes. McCue is open with the Youth Cabinet that items in the collection should be returned to communities, but that the objects are being cared for, which includes smudging.

“Because we do have an Indigenous Advisory Circle, which includes people from all over Canada, I feel like things are going in the right direction,” she says.

McCue also believes that through the autonomy she has leading the youth cabinet program the ROM is doing a good job of staying relevant to Indigenous people.

“It’s important that institutions like the ROM give up some of that control to Indigenous people to lead the program the way we like,” she says. “And that includes focusing on the land, having medicines available for us to smudge – things you wouldn’t normally be able to do in an institution like that.”