bluemouth inc's immersive and interactive show about a trip to Bosnia uses multimedia very well, but some aspects don't come together 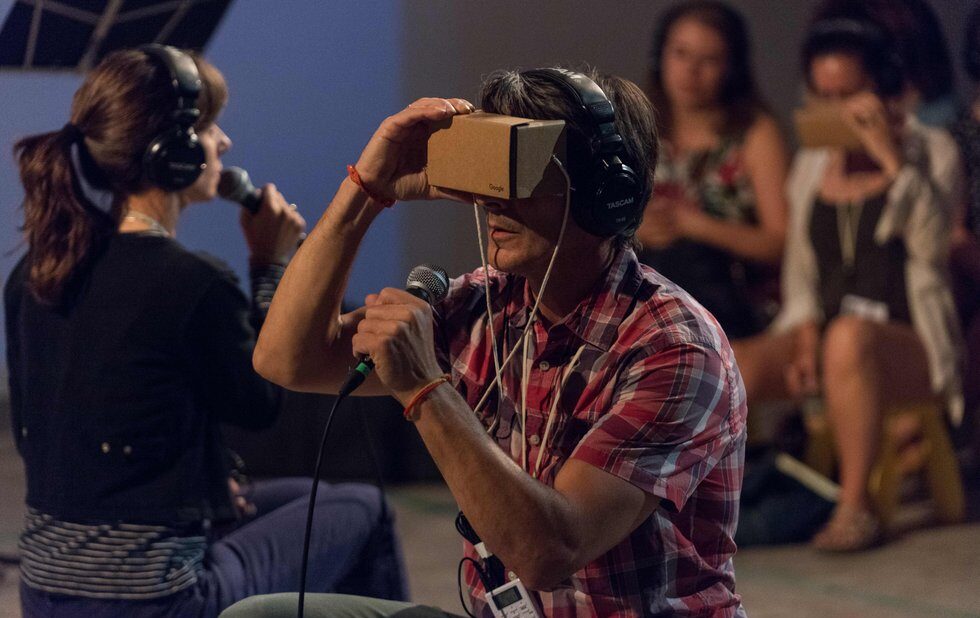 The inventive Canadian performance collective bluemouth inc. presented a workshop of Café Sarajevo a year-and-a-half ago at SummerWorks. The show feels more developed now, and many of its themes about a divided population feel more relevant than ever, but some aspects don’t quite come together.

The show is constructed like a lively podcast taping about bluemouth inc. member Lucy Simic‘s trip to her father’s birthplace of Bosnia. Simic recounts a trip there with her partner, bluemouth’s Stephen O’Connell, where the pair talked to people, visited landmarks and found small and big reminders of the Bosnian War.

Some of their findings are shown to us on viewfinders others are projected onto a big screen and still others are recreated in live moments, featuring audience members. Meanwhile, hosts Mariel Marshall and Peter Musante make sure the podcast ticks along, setting up scenes, herding us to various sections in the open space at the Theatre Centre and doing a decent job of making their interview segments seem spontaneous.

Some of the work’s most memorable moments are the interactive ones, as we witness the political connotations of different cups of coffee, for instance, or as we line up in a circle as Bosnians play a game of soccer. From the audio on wireless headphones to the 360 degree viewfinders, the technical aspects of the show – Jacob Niedzwiecki is credited as creative technologist – work beautifully.

What’s less successful are the excerpts from a YouTube video of a 1971 televised debate between French theorist Michel Foucault and American philosopher Noam Chomsky. It was this video that apparently inspired the show, but the connection between that debate and the show’s main themes never becomes clear. And Simic’s trips to Washington, D.C.’s Women’s March and the site of the former Berlin Wall feel like unnecessary detours.

As in the workshop version, one of the most haunting sections involves the singing of a lilting, minor-key Bosnian folk song by Marshall (who’s got a gorgeous voice) and O’Connell on guitar. At SummerWorks, Marshall led the audience on a sing-along, which became a magical, cathartic moment of shared humanity.

This version is a solo, and while it’s slightly less affecting, it’s still a lovely way to end a thought-provoking show.