Having fronted the political hip-hop act The Coup since the 90s – with a digression to form Street Sweeper Social Club with Rage Against the Machine guitarist Tom Morello – Boots Riley is rap royalty.

But now he’s expanded his artistic reach with his first feature film, writing and directing the Sundance smash Sorry To Bother You, a social satire that follows struggling Oakland telemarketer Cassius “Cash” Green (Atlanta’s Lakeith Stanfield) on an increasingly bizarre journey after he learns switching to his “white voice” will help him close more deals. When  Cash’s success brings him to the attention of the sinister WorryFree corporation, his whole world changes.

On his Toronto press stop last month, Riley and I talked about comedy, code-switching and why being an optimist in our current times requires taking a very long view.

You screened the film at NXNE last night. How did it go?

Raucous in a really good way. It’s definitely something I hoped for the film, that people would watch it in groups. There’s a certain [experience], the responses to different things in there, that really is about being in a social space.

Sorry To Bother You is a satire of present-day America that takes some really big leaps and eventually goes somewhere unprecedented in American cinema. It’s also your first movie, and you were basically working without a net. When did you know you could pull it off?

One of the ways I was able to achieve that is that for all the fantastical elements – all of the weird things and the turns – I didn’t say, “Hey, I want to do this thing, let me figure out how to get the story there.” Every turn that happens makes sense because it is needed – because it serves a purpose.

You establish a fantastical element to Cash’s reality early on: when he makes a sales call, he literally drops into the homes of the people he’s talking to.

I needed to imply the feeling that happens when a call is interrupting someone’s day. And I needed to talk about that feeling of being other than yourself, with his “white voice,” so I had to make it sound like it’s overdubbed to everyone else. I wanted people to not just be looking at Cassius. I wanted them to feel those changes that happen in his world so that we go through that experience with him.

Sorry To Bother You is – at least by one reading – a comedy about code-switching, which feels utterly of the moment. But you wrote it years ago, and even published the script online, long before the conversation was happening.

In our 2014 version of it, which was in McSweeney’s, someone says “WorryFree is making America great again.” I had to change that for the movie the world right now has made my script too on-the-nose.

You finished the script in 2012 and put it online in 2014. When you finally went into production, was there anything else that was too on-the-nose for the age of Donald Trump?

A lot of my critiques are tied to not the personalities of who’s in power but the economic system in which we live, so this could have been relevant in the 70s. And it will be relevant until we have some big changes in the way our world works. My only hope is that we change things enough to where this movie is irrelevant.

Do you think that’s possible in our lifetime?

I think it is possible that we will see the movement that will eventually change it. I’m trying to be healthy and live a lot longer. I’m 47 now. Let’s say I live till 90 [knocks wooden table] – there’s a lot of change that can happen. 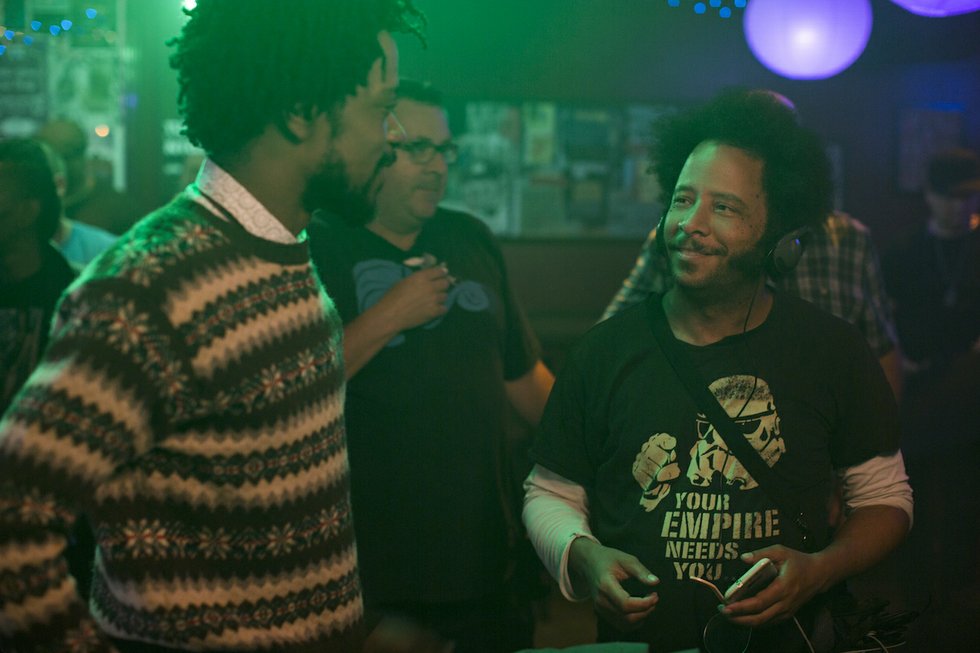 Lakeith Stanfield (left) and director Boots Riley on the set of Sorry To Bother You.

I just don’t feel like America is interested in change right now, or changing for the better, anyway. Hell, up here in Ontario we just elected a right-wing idiot who simply copied Trump’s strategy of pandering to his base without actually having a platform or a plan. Is there a way to turn this around?

A right-wing think tank did a survey – Harvard did a similar one – and they were up in arms because out of 4,200 millennials in the United States, one in two of them wanted a socialist society.

[laughter] I’m optimistic that there are ways to do it. I’m not a fortune teller, so I don’t know that it will happen. But there are ways that social movements could stop being just about saying “We’re upset!” and figure out where their power lies. I was in France five years ago and there was a proposal to change the retirement age from 61 to 62. They had a general strike, and it changed.

I don’t know that America could pull off a general strike, though.

Well, in the U.S. right now only seven per cent of the work force is organized.

And apathy is such a huge problem. It’s hard to get people to care about anything for an extended period of time.

Only like 60 or 70 million people voted out of 300 million [in the 2016 presidential election], and Trump won by less votes than Romney lost by [in 2012]. Which means a whole bunch of people who voted for Obama didn’t come out [for Hillary Clinton]. And the reason they didn’t come out is the same reason why Hillary’s campaign pumped up Trump in the beginning: her policies weren’t showing as that much different than Jeb Bush’s. But the point is, whether or not we believe people should have come out and voted, the reality is that most people are way to the left of the Democratic Party. All those people that didn’t vote, even.

So how do you get them back?

We’ve got to offer some other way of social change. We’ve seen in the past that if people are organized in the way that they are, for instance, in France, you can make politicians do whatever you want them to do. We’re gonna have to have movements that actually affect the bottom line in places. We need to have more focus on that, because what’s going to happen, I believe, in the U.S. is that a Democrat’s going to get in office, and all they have to do is be an inch to the left of Trump. Just an inch, and they could get in there and we won’t criticize them for anything. We’re not asking anything of [candidates] – we’re  just asking them to not be the other person.