10 new albums to hear from Toronto musicians this fall 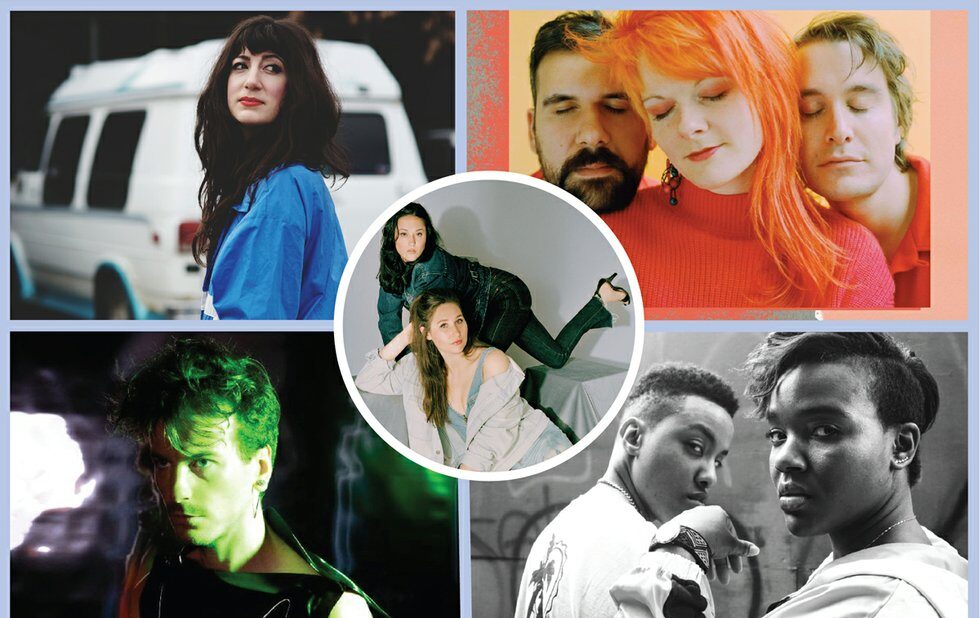 This album came out earlier this month, but it deserves a little more shine. The musical duo and real-life couple of pHoenix Pagliacci (formerly of The Sorority) and producer/songwriter Truss makes soulful hip-hop-laced alt-R&B exploring Black queer love, loss and spiritual growth. Their name is pronounced “trippy” but this debut LP is a smooth listen.

Lisa Conway is the kind of restless singer/songwriter who’s always pushing herself with new conceits and experiments. For this new EP, she gave herself a rule of a minimum 120 beats per minute per song in order to make faster songs and write quickly and directly. She broke that rule, but her songs, which mix organic and electronic elements in rich and satisfying ways, still push her always evolving sound. Mika Posen does strings, while local collaborators like Casey MQ and Pursuit Grooves add synths and glitchy electronic percussion.

Rapport: In The Dark

Since we put them in our Toronto artists to watch list in 2018 list, this bright and bubbly new-wave-indebted indie pop band has gone from a duo to a trio and Maddy Wilde (formerly of Spiral Beach and Moon King) has stepped forward as the frontperson. With her unbridled energy and sticky pop hooks, not to mention 80s pop chops from Kurt Marble and Mike Pereira, it’s an all-you-can-eat bubblegum feast.

Andre Ethier: Croak In The Woods

The second instalment in a planned trilogy of album collaborations with producer Sandro Perri (who also has his own new album, Soft Landing), Croak In The Woods finds the former Deadly Snakes frontperson continuing his new guise as a rambling acoustic singer/songwriter. A raw and sparse meditation on nature, aging and existence, it’s unhurried and subtly clever – like a Canadian Bill Callahan.

If the Cadence Weapon collaborations and more frequent billings around town hadn’t tipped you off, this Montreal-born house producer is calling Toronto home these days. And his new album is full of local collabs, including exploding rapper/singers Ebhoni, Rochelle Jordan and the aforementioned Cadence Weapon. There’s also collaborations with Clams Casino and Hudson Mohawke, producing songs that sound huge out of your speakers.

Toronto-born singer/songwriter Warren Hildebrand has been living, making music and operating his celebrated DIY label Orchid Tapes from his Brooklyn home studio for years now, but he’s still got this city in his DNA. Case in point: this album features two songs called Ontario Sunshine. The songs released so far tackle HIV anxiety as a sexually active queer person and living with mental illness. They’re dreamy and lo-fi, full of homespun warmth.

It had been five years since we’d heard from Robert Alfons’s electronic dark-wave project when he released The Destroyer last April. Now, already, he’s coming back with the follow-up, or completing the “double album in two parts.” It’s a more delicate, earnest counterpart to the pulse of part 1, exploring the emotional side to his hypnotic industrial drive. And like that last album, there’s a collaboration with Maya Postepski, his original partner in TR/ST.

We were already wondering why the duo of Carlyn Bezic and Amanda Crist hadn’t blown up after their self-titled debut. (My guess: bad SEO.) If you’ve seen them live lately you know the hot streak they’re on and how killer the new songs are: a catchy mix of robotic funk, sexed-up 80s R&B and chilly, synthy post-punk, all written through the prism of late capitalism. They’re fed up – F.E.D.U.P.

Maryland-born, Toronto-based experimental electronic artist Vanese Smith is using her new album to highlight an unsung hero of American history: Bessie Coleman, the first Black American female pilot. “As a Black women I felt it important to highlight the past while inspiring the future, especially in underrepresented fields,” Smith tells us via email. She’s looking at it as a multimedia art project and plans to tour with a sound/art installation.

Kyle Knapp’s arty post-punk band has shaken off a bit of its lo-fi dust, but the band still does things at a relentless tape-trader-style pace. This will be their second album of 2019 after (Oath Of Intent), recorded at the same veterans’ hall. Expect Mark E. Smith-style speak-singing, skronky saxophones and some reel-to-reel tape hiss. And expect the release show to be at some venue you never realized was a venue.