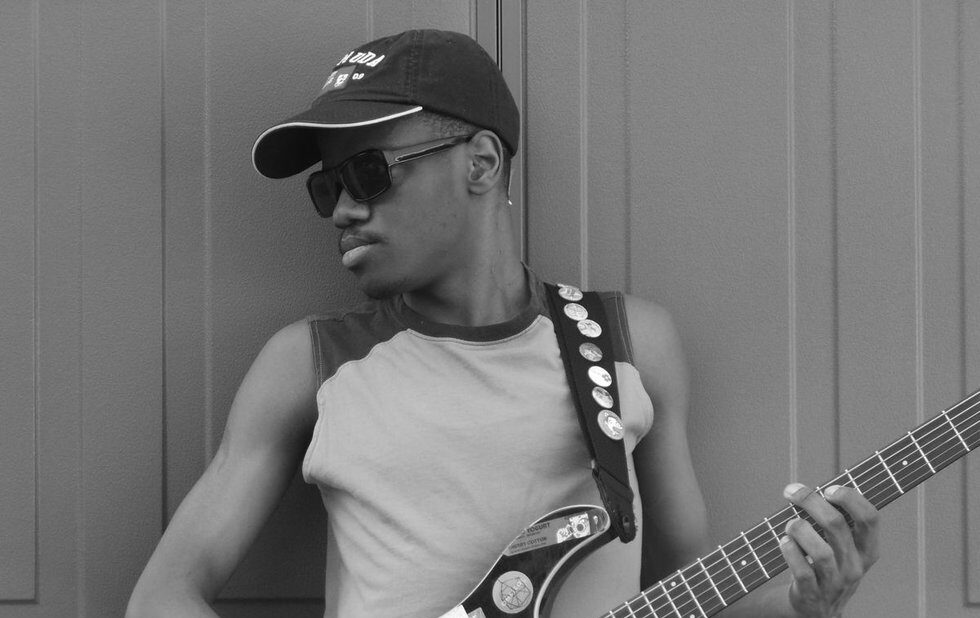 Over french fries at DIY venue/vegan cafe D-Beatstro, he describes his hometown of Mississauga as “a beautiful pie that’s missing a slice” and Toronto’s music scene as “a star that both emits light but also operates like a black hole.”

Along with Matthew Mikuljan and Nick Corcoran, the 20-year-old Clarkson native is the lead guitarist and vocalist of Joncro, a jangly noise rock band both reminiscent of effervescent early 80s power-pop and steeped in the tradition of early 2000s garage rock.

Formerly known as Troubadour, the group selected something new after a change in the member lineup and due to an older, defunct band in the area laying claim to the name.

“I decided to use elements of Jamaican folklore for the the name Joncro,” explains Wilson, “which is patois for the turkey vultures you see everywhere in the Americas.”

Wilson expanded the persona of Joncro further and eventually created a backstory for the character. Both protagonist and synecdoche, Joncro’s “real” name is Giovanni Corovo and he is a Venetian doctor of Moorish descent.

“He’s racially ambiguous. There’s this idea that anyone can play him [as a character] but it doesn’t take away from his ethnic identity.”

The construction of the band’s identity follows Wilson’s desire to impart storytelling and mythology into his music. “You can’t not incorporate stories,” he says. “You grow up hearing them, whether people tell them to you or not, so you incorporate that into your daily life.

“I always found it kind of depressing that people don’t know about Jamaican folklore [like The River Mumma or Obeah]. You can tell a lot about the culture by the stories they come up with. That is important to me because it’s a way of showcasing what has happened, what you believe and what you value.”

When trying to parse how his own music fits into Canada’s often hotly contested musical identity, Wilson pulls from artists as diverse as A Tribe Called Red to L’Etranger. He references Abel Tesfaye’s use of the tonal influences of Ethiopian music or the way steel drums can be found in the music of Toronto’s Weaves.

“The only cohesive thing about Canadian rock is that we aren’t afraid to mix things and push against the grain.”

That statement applies to the way Canadian artists have often reimagined not only sounds but also space. Thanks to rising figures like Ramriddlz and John River, formerly peripheral regions like Mississauga (which Wilson reminds me is still “the sixth biggest city in the country”) are redefining the stories being told about their cities. While lots of places flaunt the impression of a legitimately inclusive scene, Wilson says it’s a reality in Mississauga.

“You could have a metal band playing with an acoustic band and nobody cares because we’re going to have fun with it. At my first show, I saw bands with members of all different races. This is the stuff that made me say ‘Oh, I like this place.’”

When it comes to prying open the boundaries between music scenes, Wilson’s strategy is simple. Similar to the rest of his artistic approach, it’s based on inadvertently changing the conversation.

“I see the need for diversity but I also don’t feel scared to add to it. One of the first ways of increasing our visibility is by not being afraid of saying, ‘Hi, I’m here.’”