Plus, the ruthless face of COVID-19, Erin O'Toole's paranoid conservatism and women in comedy is no joke in reader mail this week 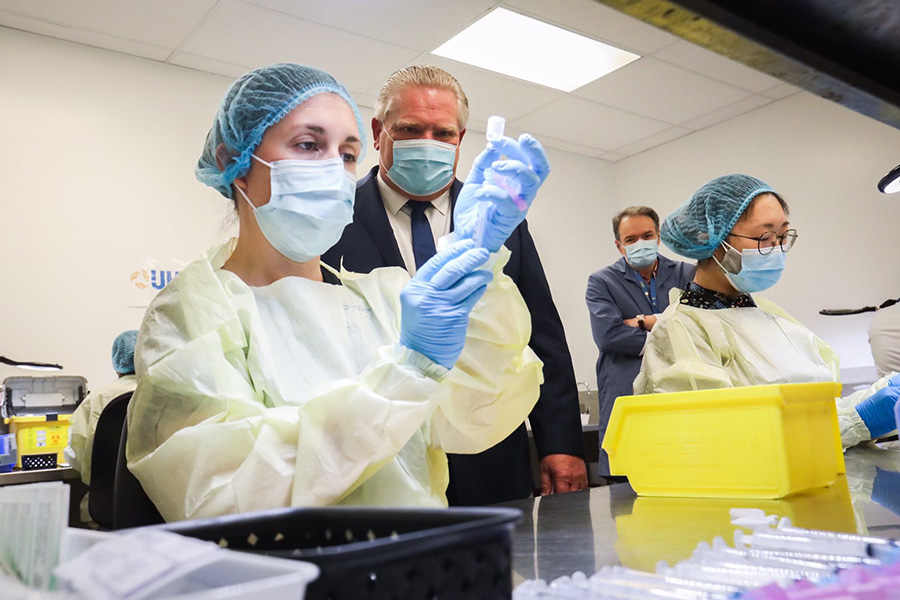 Re Doug Ford’s Deadly Dance With The Coronavirus (NOW Online, January 11) The province’s new lockdown measures are wishy-washy if you ask me. Non-essential stores to remain open until 8 pm? How is that a “lockdown?” It’s dark at 5 pm. Let’s close up and go home at nightfall.

Furthermore, Big Box stores need to be closed; they have too much traffic to be controllable. Will police actually arrest and/or charge shoppers who wear their masks under the nose or chin and don’t keep their distance?

On the other hand, small businesses should be allowed to remain open, not only to keep them afloat but also to better disperse shoppers. In my experience, small stores are doing a good job dealing with the coronavirus. Maybe the police could be assigned to assist them in case of belligerent customers such as anti-maskers, people in a hurry or just in a bad mood?

Shutting down for one month is a waste

Re Ontario Premier Doug Ford Declares State Of Emergency (NOW Online, January 12). Remember the first worldwide lockdown with pictures of deserted streets? If we had just stuck to that plan. Shutting down for one month is a waste. No one is adhering to the rules.

We are now in a second lockdown and my neighbour’s basement renovation continues. I am teaching classes from home and have to record lectures after work hours so that I won’t have a background noise issue. I could understand if my neighbour’s house was badly damaged and at risk of falling down but it’s not.

I have observed the construction workers grouped together less than two metres apart and none of them wear masks. When the supervisor visits, he talks to them at close range and also doesn’t wear a mask. There is either a cavalier attitude about masking and physical distancing or they are blissfully ignorant of the risks.

COVID case numbers in our province are at an all-time high. Nothing will really change with this new lockdown. We’ll continue to have more outbreaks, more cases and more deaths. The vaccine rollout is so slow that it will likely not make much of a difference until next year. In the meantime, we all suffer.

Another Love Your Body hit

Re Love Your Body 2021 (NOW, January 14-20). I do not know how you do it, but your editorial team puts out some of the best copy. Toronto is a better place for NOW. I only wish you profiled more small businesses that make Toronto great.

The ruthless face of COVID-19

Re This Is What COVID-19 Looks Like by Elisa-Marie Baglione (NOW Online, January 15). This article should be shared, shared and shared again! This is the face of COVID-19. This is the anguish felt by families all over the world. COVID-19 is real, it’s ruthless, it doesn’t care. Stay home.

Stories like this have the power to save lives

Please find more stories like Elisa-Marie Baglione’s. Find critical care survivors. Find and speak with the people that have lost a mother, father, sibling, grandparent, aunt or uncle to COVID-19. Find the nurses, therapists, diagnostic techs, environmental service people and all the others exhausted at the bedsides of those dying. Put a face to the people involved in this disaster. This story and many others like it have the ability to save so many lives.

Re Trumpism In Canada? Erin O’Toole Be Thy Name (NOW Online, January 9) The entire right-wing global Conservative movement is infected with the disease of stupidity and paranoia about Muslims, Marxists, “Global Capitalists,” and white and non-white people working together to destroy “their” world. The QAnon madness is another manifestation of their insanity. Add right-wing Jewish settlers and Indian Hindu fascists, also hateful of Muslims, Blacks and the Left, and you have a global coalition of insanity. I used to consider voting Conservative. Unfortunately, Conservative today means crazy conspiracies.

It appears that Erin O’Toole has a choice to make – pander to narrow-minded ‘populists’ (self-interested bigots) or broaden the tent as noble failures like Joe Clark and Robert Stanfield tried to do and Brian Mulroney did successfully – albeit, with some trickery which may ultimately have created the PC demise.

It would be nice to see a stronger repudiation of silly conspiracy theorists so that we in the moderate middle can feel better about O’Toole as an alternative.

While we are indeed not the U.S., we are subject to the same social media echo chamber syndrome that seems to magnify extreme and unfounded conspiracy and fuel division. As a former military man, it would be great if O’Toole would draw on that to provide a pragmatic, positive and action-oriented agenda and plan that Canadians could get behind. Make the critique pragmatic – not personal.

I remember hearing Clark say as part of his surprise campaign for the PC leadership in 1976, “People are tired of hearing about what we are against. People want to hear about what we are for.” A lot of us could vote for that kind of platform again.

First Nations the first to defend us

Re For Indigenous Peoples It’s Time To Look Within (NOW Online, January 9). Excellent commentary by Pamela Palmater. I often wonder how Indigenous peoples manage to keep their chins up with all the assaults on their land, water and persons from all angles and positions. They are the first to gather up emergency response to the defence of our resources and to take the brunt of RCMP and corporate violence – usually on their treaty land. From which quarter can First Nations expect unbiased assistance?

Re Glenn Sumi’s 4 Comedy Albums By Toronto Women To Listen To In 2021 (NOW Online, January 6).

This article tells your readership that they shouldn’t bother with comedy albums from women. “Yeah I listened to a couple like they told me to but most of them sucked,” is the message that will be taken away here.

It’s important to recognize your own bias. Sumi hypothesizes at the beginning of the article that maybe we haven’t listened to albums from women because “maybe men are more aggressive at promoting”. This is not the case.

I am writing to you regarding the article Scarborough-Agincourt By-election: A Primer (NOW Online, January 14). It states that former city councillor Jim Karygiannis was removed from office in September after the city’s integrity commissioner found he had exceeded campaign spending limits during the 2018 election. In actuality, the City Clerk served a notice of default on Mr. Karygiannis in November.