NOW MagazineNewsToronto Election 2018: a case for the Province of Toronto

Toronto Election 2018: a case for the Province of Toronto 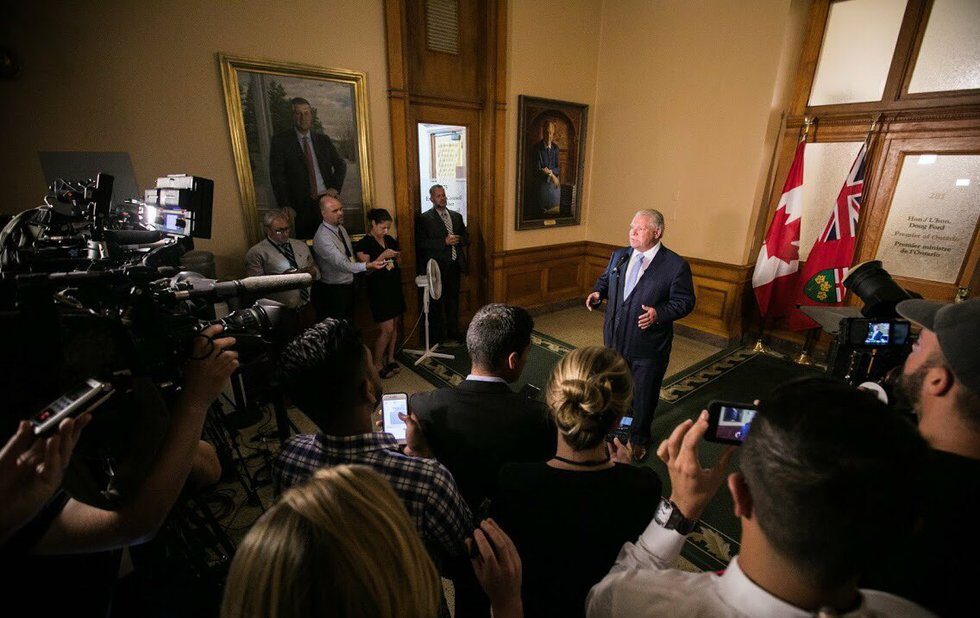 Doug Ford is all too willing to run roughshod over our Toronto's local democracy.

When in Rome, you see the letters SPQR inscribed on public works buildings. They represent the phrase Senatus Populusque Romanus, which is Latin for “The Roman Senate and People” – or more loosely in English, “The Senate and The People of Rome.”

We are just as great a city and require a similar political arrangement – The Province and the People of Toronto. Given the current Ontario government’s ideological distaste for central Toronto’s tendency to prefer liberals and social democrats to rightists, it’s time that the economic engine of Canada and the cultural capital of English Canada claim the rights and powers of a province.

This gambit is vital now that we have a provincial government, led by Doug Ford, that is all too willing to run roughshod over our local democracy by singling out the city in the middle of a municipal election to order the size of council cut in half.

In fact, Ottawa and London held secret talks for 50 years to arrange for Canada to annex Jamaica, Barbados, Trinidad, etc. That didn’t happen. We got Newfoundland instead.

Ottawa was to govern above the provinces and was given the power to create provinces wherever it wants, and does so to resolve problems of effective representation and governance.

In 1905, the federal government formed Alberta and Saskatchewan out of what was then the gigantic Northwest Territories. And to keep Ontario and Quebec happy, Ottawa gave both of these provinces what are now northern Ontario and northern Quebec in 1912.

In 1999, Ottawa carved Nunavut out of the Eastern Arctic of the Northwest Territories.

The necessity for social governance (education, health care, etc.) expanded the roles of provinces far beyond what John A. Macdonald and his goodfellas could have foreseen – or liked.

But the constitution still reflects their view that the federal government is pre-eminent.

In contrast, cities and towns get no such respect from provinces. Constitutionally, they are the preserves of the provinces.

Indeed. In 1998, the Progressive Conservative government of Mike Harris foisted amalgamation on Toronto, merging the downtown core with the surrounding municipalities of Etobicoke, York, East York, North York and Scarborough.

At the same time, the Harris regime also downloaded mandated services to cities, but without giving them the wherewithal to make things work efficiently. Municipalities either cut back services or privatized them. The Walkerton water-contamination disaster was one notable consequence.

Now Ford has decided that he can cut the most directly representative body of government for 3,000,000 people.

With provincial status, we don’t need to try to pay for city services from property taxes or by begging for a share of the gas tax.

We get control over education, including sex education, which might then reflect the people of Toronto’s progressive views.

We get direct say over health care and can have as many opioid-addiction response centres as we need rather than dealing with the current Ontario government’s penchant for gambling with citizens’ lives.

We get direct oversight on all the issues and programs that matter to Torontonians.

We could even dis-amalgamate and allow each part of the old Toronto restore its original vision and neighbourliness, and its local city councils, which would then become neighbourhood councils.

We get a seat at the First Ministers’ Conferences.

We get to invest in ourselves.

Now’s the time for Toronto’s federal representatives to argue that Ontario’s gutting of the council of our nation’s multicultural model to the world needs to be answered by creating Canada’s 11th province.