NOW MagazineNewsToronto pandemics past: From cholera to COVID-19

Toronto pandemics past: From cholera to COVID-19

There are many markers left behind by epidemics and pandemics past – each one devastating, each one transformative 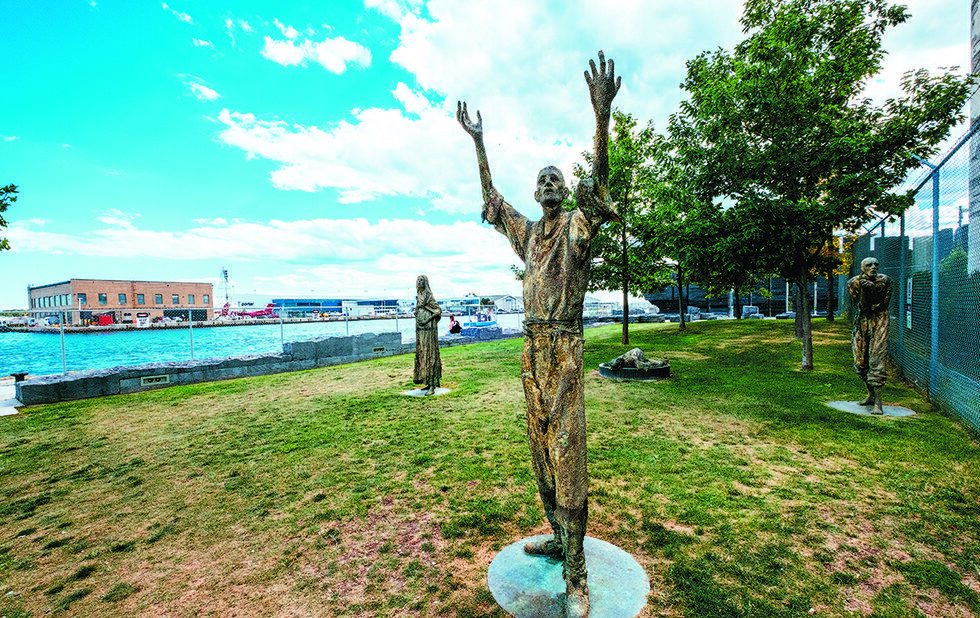 Ireland Park beside the Canada Malting silos at the foot of Bathurst commemorates the arrival of Irish migrants of the potato famine.

From cholera to COVID-19, epidemics (and pandemics) have been makers and breakers of history.

They cleared the way for European invasion, genocide, colonization and settlement. In Canada, 40 to 80 per cent of First Nations are estimated to have been killed by influenza, measles, smallpox, tuberculosis and other diseases against which they had no immunity.

In the year of COVID-19 we are reminded that disease can return uninvited to perform its dance at any time.

In Toronto, the markers left behind are numerous. Cholera, typhus, influenza, polio, tuberculosis, AIDS, SARS, diabetes, Lyme disease, each one devastating, each one a transformer of society.

Love in the time of cholera

In February 1832, anticipating the arrival of immigrants from Europe (which had been hit with an epidemic of cholera), Lower Canada Lieutenant Governor Matthew Aylmer established a quarantine station on Grosse-Îsle in the St. Lawrence.

In June of that year, the island was overwhelmed by the arrival of 400 ships with 25,000 passengers. When the apparently healthy were allowed to move on, they took cholera with them – into Quebec City, Montreal and beyond.

When the river boatmen who were supposed to ferry them around the Lachine rapids into Lake Ontario fled and local magistrates tried to block the way of those who got through, Upper Canada Lieutenant Governor John Colborne provided the magistrates with funding and ordered them to set up hospitals and assist the immigrants on their way.

But nothing could prevent cholera from reaching the Town of York (that would become Toronto in 1834).

In the summer of 1832, it was hit with its first cholera epidemic. At least 200 of its 5,000 inhabitants died. They were buried in the cemetery of the church of St. Mary at Bathurst and College, a gesture that earned the first Roman Catholic Bishop of Upper Canada, Alexander Macdonell, the gift of Fort York Garrison land that allowed him to build the church and the cemetery. A memorial to cholera victims buried there was unveiled in 2017. 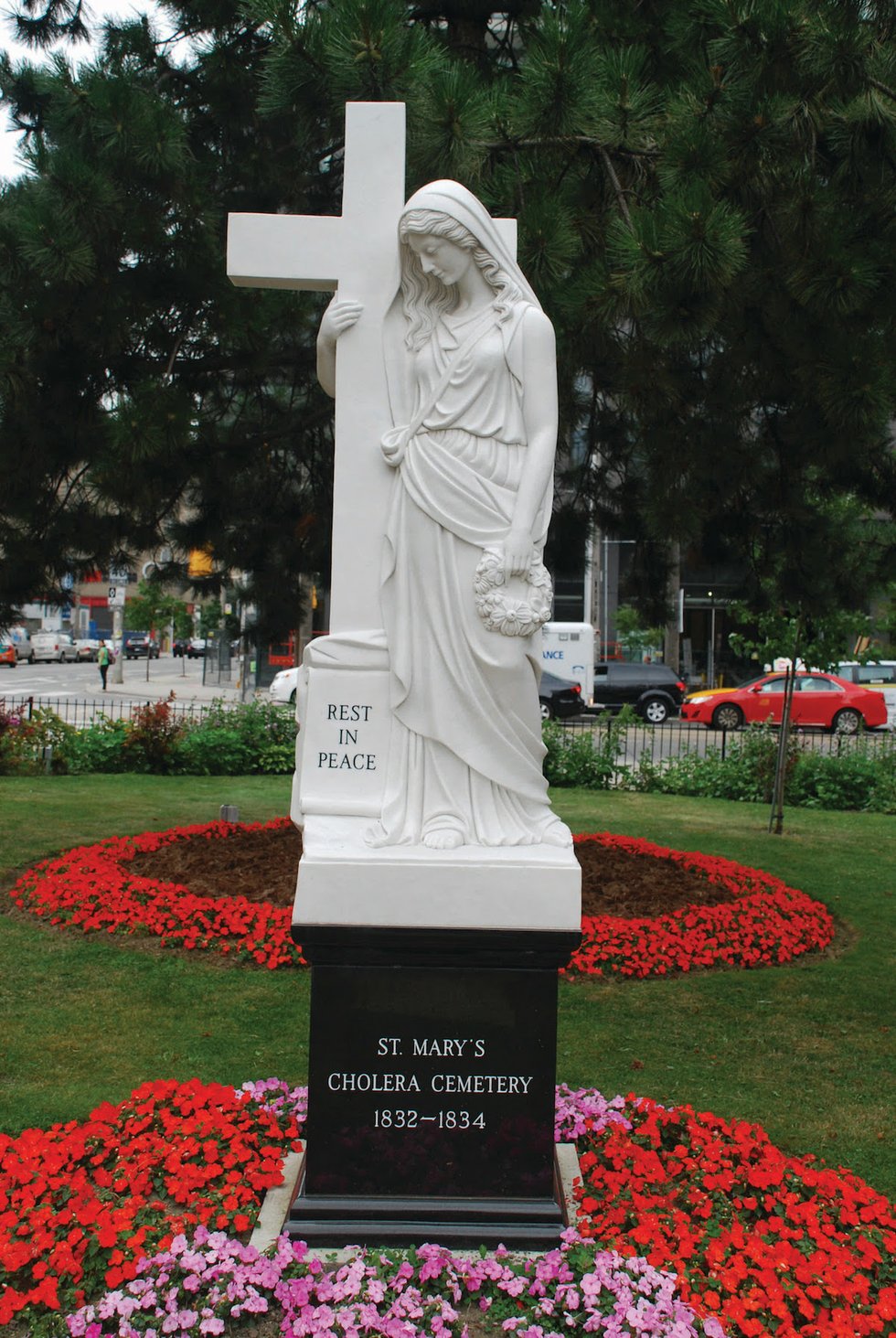 The 200 who died in York were a fraction of the total of 7,800 that cholera killed in all of Upper Canada and Lower Canada combined. Some 5,000 of them were buried on Grosse-Îsle, which remained a quarantine station until 1937. It’s now a National Historic Site, but has been temporarily closed by COVID-19 emergency.

Tackling the epidemic brought out the best and worst in those who had to confront it, revealing ignorance and stupidity, humanity and inhumanity and practicality in a search for solutions that trumped politics. Epidemics can do that.

According to Professor Heather MacDougall of the University of Waterloo, “The first cholera epidemic provided the template for future disease prevention and control efforts. Lessons learned from 1832 included the importance of strong leadership, clear communication about the nature of the disease and the steps required to prevent or control it, adequate legal and financial support for front-line workers and volunteers, and recognition that each outbreak would generate a social response commensurate with society’s cultural values and perception of danger.”

“Fever sheds” at King and John

The 1832 cholera epidemic made good use of the city’s first General Hospital, a two-storey, 100-bed brick building that opened in 1829 at the northwest corner of King and John, which is now the site of the TIFF Bell Lightbox. It would be filled to overflowing into the “fever sheds” that were set up around it and on Parliament Street. It would overflow again in 1847 with refugees of the Irish potato famine who’d contracted typhus.

The 1832 epidemic also left a legacy.

According to Logan Atkinson of the University of Ottawa, when the Town of York became the City of Toronto in 1834, its first councillors overcame political differences among themselves and with John Colborne’s colonial government to produce bylaws that would fine anyone who deposited “dung, manure or filth of any description” in the city or allow the accumulation of “any garbage of fish or any other offensive, putrid or unwholesome substance.”

A board of health was established and empowered to “establish lazarettos [quarantine stations], employ physicians and other attendants, purchase medicines and prescribe treatment… The board also empowered itself to ‘order the forcible removal of any person or thing’ within the city that was ‘infected or tainted with the pestilential matter.’”

Tilting to the notion of those who believed (30 years before the publication of Pasteur’s germ theory) that disease was caused by “bad air,” the board of health urged for cleanliness and the whitewashing of homes, and burning tar, pitch and rosin as an “anti-contagion.”

None of these prevented the spread of cholera. Nor did blaming the mostly poor, immigrant victims, prohibiting traditional mourning practices or enforcing strict rules regarding the burial of the dead – which led to their exhumation by relatives and secret reburials.

Also useless were the bogus remedies peddled by local doctors and druggists.

More useful, for a city that would remain “Muddy York” for decades, was an “Act for Regulating, Paving, Cleaning, and Repairing the Streets and Roads, and for Constructing Common Sewers.” Sewers would be crucial in preventing the contamination of drinking water.

Estimates of the number of deaths range from 158 to 342. But, after that year’s experience, the city was better equipped to deal with future epidemics. How much better equipped? How much more did it need to learn? Those questions would be tested through epidemics to come, up to the present attack of COVID-19. 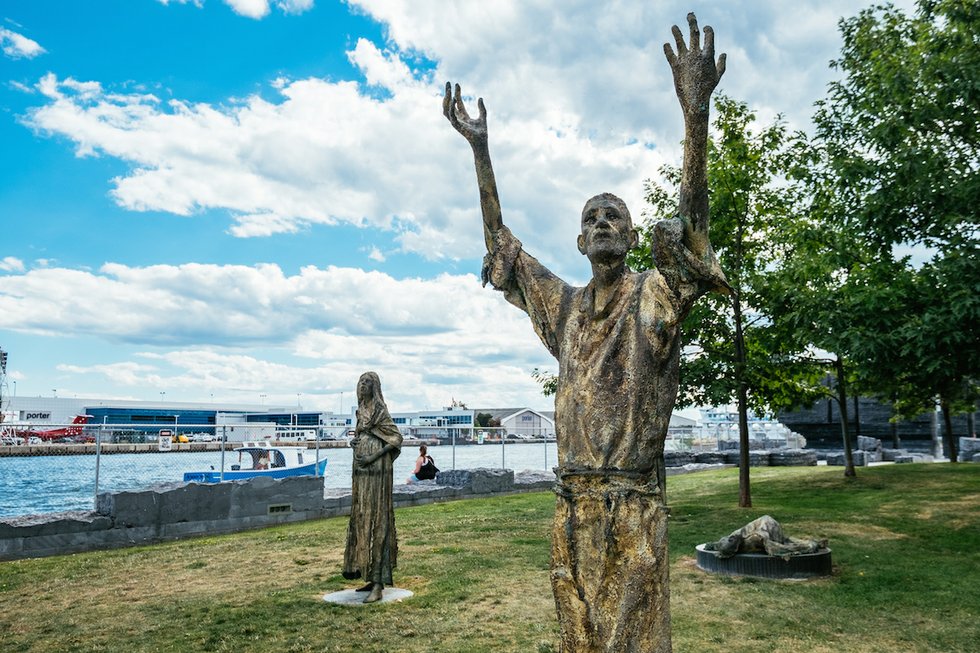 The Arrival, a series of five bronze sculptures of famine refugees by Rowan Gillespie at Ireland Park.

The arrival of “ship fever”

They landed at Reese’s Wharf, near the site of the present-day Toronto Convention Centre.

Many were sick, mostly of typhus. The city was never filled with all 38,560 refugees. Those who could headed for places where they have relatives.

Some 1,005 immigrants were housed in fever sheds, huge wooden tent-like structures with canvas walls, near Toronto’s first General Hospital. Another 781 took lodgings in the city. The remainder left for other parts of British North America or the U.S., but many could not find work and returned to Toronto.

Some 1,186 died. They were buried in St. Paul’s Cemetery on Queen East and St. James Anglican cemetery at Parliament and Bloor. Some 50 whose religion could not be determined were buried in Potters’ Field, west of Yonge north of Bloor.

Survivors were urged to leave Toronto.

In 2007, Ireland Park beside the Canada Malting silos at the foot of Bathurst was opened by the president of Ireland, Mary McAleese, and Ontario Premier Dalton McGuinty.

It features a wall of Kilkenny limestone with the names of those who died in 1847, a cylinder of stacked glass that serves as a beacon of hope, oak trees, and The Arrival, a series of five bronze sculptures of famine refugees by Rowan Gillespie, which mirror Departure, his seven-piece series at Custom House Quay in Dublin.

On St. Patrick’s Day last year, the Ireland Park Foundation signed the lease for 3 Eireann Quay, the former administrative building of the Canada Malting Company on the waterfront. To be renamed the Corleck, it will serve as the foundation’s permanent home for events and exhibitions. 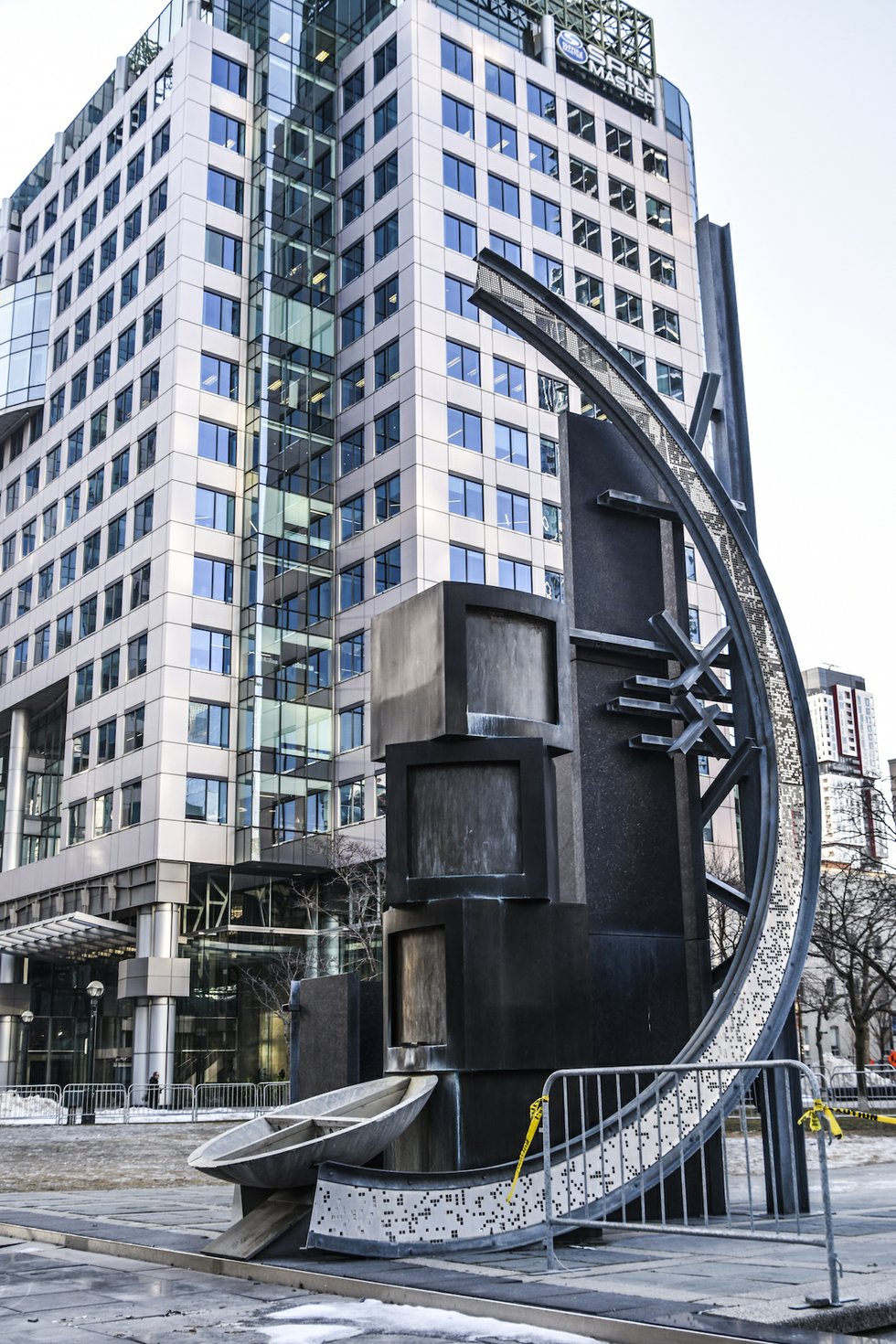 Bernie Miller sculpture remembers the Irish famine “fever sheds” that were built beside the General Hospital that was located on what is now the site of the TIFF Bell Lightbox.

On the ground floor of the TIFF Bell Lightbox, beyond the escalators, there is a video of excavation of the site prior to construction. It features Ron Williamson of Archaeological Services Inc., who headed the dig, and historian Mark G. McGowan of St. Michael’s College of the University of Toronto, who is the author of Death Or Canada: The Irish Famine Migration To Toronto, 1847.

In the Lightbox Reference Library on the fourth floor, artifacts from the dig are displayed. Among the fragments that fell on the floors of the fever sheds is a 7,000-year-old early First Nations spearhead.

In 1852 in Toronto the population was one-third Irish. Anti-Irish and anti-Catholic sentiment was strong, especially among Protestant “Orange” Irish.

The Great Famine provided an enormous boost to the cause of Irish Home Rule that was strongly supported by Irish Catholics – but not by Orangemen – throughout North America.

By 1866, Canada was embroiled in the Fenian Wars, which were led by Irish nationalists from the U.S. who sought to cause the British Army to leave Ireland for the defence of Canada.

Despite victories at Ridgeway – where University of Toronto students were among the Canadian militia – and the next day at Fort Erie, the Fenians abandoned their quest and returned to the U.S., where they were immediately arrested.

The poorly armed and barely trained Canadian militia were humiliated by the Fenians. Canada responded by determining to convert its militia into the properly trained, professional army that would prove itself at Vimy.