Belfast, Passing, Portraits From A Fire, The Shrink Next Door and Red Notice are among this week's new titles 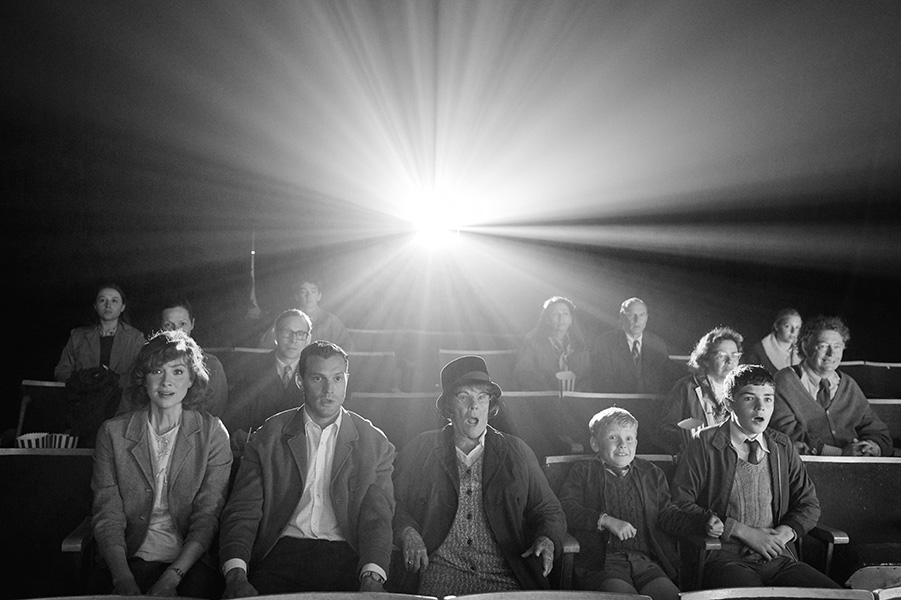 I can totally see why Branagh’s black-and-white memoir of life in Northern Ireland in the late summer of 1969 won the People’s Choice award at TIFF: it’s a crowd-pleasing coming-of-age picture about a loving family brought ever closer by adversity, lovingly crafted by a veteran entertainer. But it’s also shamelessly manipulative, with manufactured conflicts among the adults that feel as exaggerated and forced as the bursts of colour young Buddy (Jude Hill) sees when he goes to the cinema or the theatre. There’s also the slight problem of young Hill being not quite as versatile a performer as the adults surrounding him. Sure, any newcomer would have trouble pulling focus from the likes of Caitriona Balfe, Judi Dench, Ciarán Hinds and Jamie Dornan, but Branagh doesn’t do much to protect him, either; in fact, as Belfast goes along it becomes clear that Branagh is cutting to scenes that don’t feature his younger self at all, mining deeper feeling from the characters around him – then shifting the focus back to Buddy’s perspective for a thoroughly contrived climax. 97 min. Now playing in theatres. NNN (Norman Wilner)

With her first feature as a writer/director, actor Hall (seen this year in Godzilla Vs. Kong and The Night House) adapts Nella Larsen’s 1929 novel about two Black schoolmates reunited as adults in 20s New York City: Clare (Ruth Negga) is passing as white but desperate to reconnect with her own people, and Irene (Tessa Thompson) is deeply conflicted about that. Hall’s economical, tightly focused adaptation lets her leads carry Larsen’s complex examinations of Black identity on their faces, rather than debate the ideas as dialogue. It’s a powerful way of bringing the story to life on the screen, and Thompson and Negga are more than up for it: Thompson is as good as I’ve ever seen her, and Negga does a remarkable job of playing someone who’s spent so long denying her own existence that it’s become a sort of apologetic reflex. Eduard Grau’s black-and-white cinematography further literalizes the core issues, and Hall – whose own mixed-race background is rarely discussed, but absolutely essential to this project – steers the whole thing with grace and more than a little sadness. 98 min. Now playing in theatres, and streaming on Netflix Canada. NNNN (NW)

Portraits From A Fire

After a strong run of short films and documentaries, BC writer/director Mack’s first feature is an autobiographical drama about his own identity as a descendant of residential school survivors – so it couldn’t be more timely. But the questions of family and history that he’s wrestling with are the stuff of enduring drama. Tyler (William Magnus Lulua) is an aspiring filmmaker on the Tl’etinqox Reserve, making movies to cope with the emotional unavailability of his distant father (Nathaniel Arcand) and the literal absence of his mother. And when Tyler incorporates an old video of his mother in his newest project – at the urging of his new friend Aaron (Asivak Koostachin) – he is forced to reassess everything he thought he knew about his people. Portraits Of A Fire lays out its story artfully, as Mack and cinematographer Kaayla Whachell use the deliberately amateurish frame of Tyler’s movies to hide key elements in plain sight while anchoring the drama in the tension between Lulua and Arcand. If you missed this at the imagineNative fest, here’s another chance to catch up to an assured debut from a uniquely gifted filmmaker. 92 min. Some subtitles. Now available on VOD platforms. NNNN (NW)

The Shrink Next Door

The Anchorman reunion of Will Ferrell and Paul Rudd will be enough to get some people to watch this seriocomic adaptation of Joe Nocera’s 2019 podcast about the relationship between New York City therapist Ike Herschkopf and Marty Markowitz, the patient he manipulated – and fleeced – for three decades. But as with so many streaming shows this year, an intriguing concept is defeated by stretching the material to fill an episode order: at eight episodes, most of which run around 45 minutes, The Shrink Next Door crawls when it should sprint, forcing a gifted cast – which also includes Kathryn Hahn as Marty’s sister Phyllis and Casey Wilson as Ike’s wife Bonnie – to play variations on the same scenes over and over. The show has a sharp sense of time and place, and Rudd turns his signature affability into a weapon as the cheerfully insinuating Dr. Ike, but there’s just so much dead weight in every episode. Seriously, when a character steps up and declares “This is only the beginning” at the end of the third episode, that’s no good for anybody. New episodes Fridays on Apple TV+. NN (NW)

Red Notice is a movie where Dwayne Johnson, Ryan Reynolds and Gal Gadot run around the globe looking for the legendary treasure of Cleopatra, insulting each other and occasionally commenting on how wild all of this stuff is. Writer/director Thurber (Central Intelligence, Skyscraper) mashes up every self-aware heist picture since Steven Soderbergh’s Ocean’s trilogy, along with some yammering about archaeology (and a couple of other things) you’ll recognize from Raiders Of The Lost Ark and its sequels. No one is being asked to do anything difficult, really; just hit the right marks, follow the action choreography, snap off the dialogue and look good doing it. It’s polished and speedy, and I’m sure a lot of people will enjoy watching it, because who doesn’t like these actors doing the thing for which they’re best known? I just wish I could cite a single moment that made me laugh out loud, or surprised me, or got my heart racing the way any of the movies Red Notice has digested (and is now regurgitating) did when I first saw them. 116 min. Some subtitles. In theatres now and available to stream on Netflix Friday. Read NOW’s full review here. NN (NW)

Portraits From A Fire

Shang-Chi And The Legend Of The Ten Rings

Marking its 25th anniversary with a hybrid edition, the city’s showcase of “contemporary Asian cinema and work from the Asian diaspora” offers a wealth of features, shorts and documentaries, all of which are available to stream for the next week. We were especially charmed by Roshan Seth’s seriocomic 7 Days, which pairs Deadpool’s Karan Soni (who co-wrote the film with Seth) and Bad Education’s Geraldine Viswanathan as a potential couple stuck sheltering in place together when America locks down due to COVID, and Try Harder!, Debbie Lum’s documentary about the senior class of San Francisco’s Lowell High School, whose lives are consumed with the pressure to get into a “good” college and secure a decent future. And if you missed Beyond The Infinite Two Minutes when it played Fantasia, Junta Yamaguchi’s ingenious no-budget paradox comedy is getting another screening here.

Staying virtual for a second year, the EUFF is rolling out features and documentaries from its member countries for the next two weeks, with each title available for a 48-hour window and many accompanied by pre-recorded conversations with the filmmaker. Keep an eye out for Romania’s Acasă, My Home (Tuesday), Radu Ciorniciuc’s documentary about a family living in a nature preserve outside Bucharest, and Mandibles (November 27), the latest outré eccentricity from French filmmaker Quentin Dupieux (Rubber, Deerskin).

The physical version of the festival – known internationally as RIDM, its acronym en francais – is already underway in Montreal, but it’ll be streaming across Canada as of Sunday, with films available for four-day windows following their in-person playdates. In addition to the wealth of titles from the festival circuit (like the Hot Docs breakouts One Of Ours, The Gig Is Up and Writing With Fire) the fest offers your first chance to see Futura, a collective work from filmmakers Alice Rohrwacher (Happy As Lazzaro), Pietro Marcello (Martin Eden) and Francesco Munzi (Black Souls) that opened RIDM earlier this week. (It’s streaming in Block 1, available from Sunday to Wednesday.)

Sunday (November 14) to November 25 at engline.ridm.ca

movies Streaming What to Watch