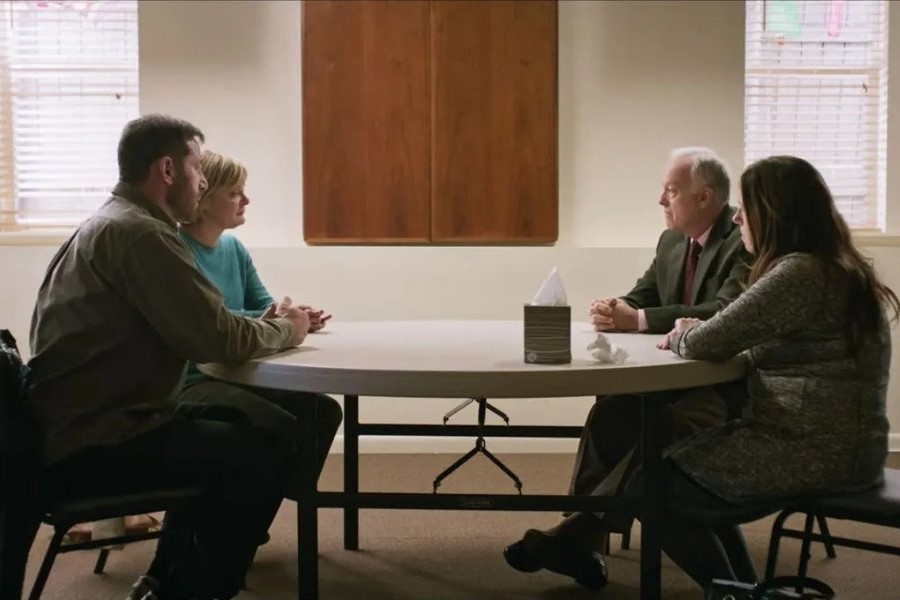 In a small church basement, two couples meet for a face-to-face conversation. We won’t know what the subject is for a while, but we can tell it’s serious.

Jay (Jason Isaacs) and Gail (Martha Plimpton) show up first, clearly on edge but trying to be gracious to the staff and facilitators. Richard (Reed Birney) and Linda (Ann Dowd) arrive a little later, apprehensive and defensive. A cloud hangs over them all, and when we finally learn why, it just pulls us in closer.

Mass is the first feature written and directed by the actor Fran Kranz, whom you might recognize from his appearances in a number of Joss Whedon projects, which got considerable comic relief – and even some tragic notes – from his nervous, rabbity presence. As a filmmaker, he’s unrecognizable; other than some brief anxiety around the placement of a tissue box early on, Mass is almost unnervingly composed, the specificity of cinematographer Ryan Jackson-Healy’s frame and the rhythms of Yang Hua Hu’s editing subtly amplifying the actors’ wrenching performances until it’s almost unbearable to look at their faces.

Forgive me for holding back on specifics, but you’ll understand when you see the film: even if you can intuit what’s going on and why, the performers get us there organically, delicately, agonizingly.

Kranz finds a centre of gravity in Linda that brings Dowd’s performance to the fore, but the entire quartet is heartbreaking, each in his or her own way, riding the ebbs and flows of this unbearable conversation until they find something like grace.

And yes, there’s a certain structural similarity to Roman Polanski’s adaptation of Yasmina Reza’s play God Of Carnage, in that both projects are about two couples trapped in a room with each other. But the previous work is more interested in drawing dividing lines between its characters for the sake of prolonging their arguments – and maybe, just maybe, in pointing out the fallacies in their strongly held viewpoints.

Kranz isn’t interested in that; he’s far more concerned with the connections that lead people to understand one another, rather than drive them further apart. It feels to me like a better way to approach the world, somehow.