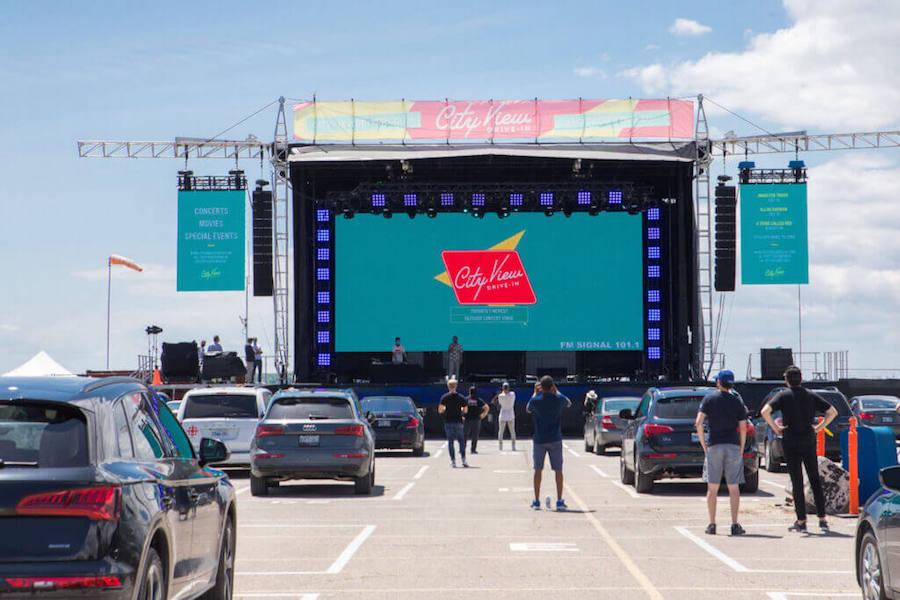 CityView Drive-In is the first of many new Toronto drive-in venues to open this summer.

Get ready for the summer of the drive-in. Big concerts and cinema screenings still aren’t allowed in Toronto (though they will be soon) and these old-fashioned outdoor movie spaces are seeing a big resurgence as a loophole. There’s a mini explosion of new drive-ins, and CityView Drive-In is first out of the gate.

CityView has a massive 238-foot stage and Rebel-quality sound and production. It’s entirely contactless and socially distant. You can listen via your car radio or by rolling down the window. And yes, it’s available for weddings.

Charles Khabouth, sometimes nicknamed Toronto’s club king, gave some doom-and-gloom interviews early in the pandemic suggesting the hospitality industry he made his name in would never be the same.

But in this interview before CityView’s inaugural gig, he’s a lot more optimistic. Though still unsure of his new venue’s financial viability, he has fully embraced the pandemic pivot.

CityView Drive-In opens this week. How did you decide this was the right kind of venue to open during the pandemic?

It’s been a bit of a long trip because it’s not something we’ve done before. However, we did a lot of research, did a lot of work ahead of time. We hired some of the best people in the country at staging and then got the best of the best when it came to sound and lighting.

Our LED screen is state of the art, so that you can see it perfectly whether it’s sunny or rainy or cold or warm.  I’m looking at the stage now, it looks amazing, the screen is incredible. It’s sunny right now and it looks like you’re watching TV at home. It’s important to have incredible quality, especially when you’re outdoors.

A lot of work went into it, let’s just say that. But it’s a big risk, especially financially.

You have a few concerts booked and a few movie nights coming. Do you look at this more as a concert venue or movie theatre?

Whatever we build, we build it to be very versatile. A mistake a lot of people make is they build something that’s very rigid. At INK, what we always look at is: how can we build something that can turn on a dime? This can go from a nightclub to a corporate event, space, concert venue and so on. It’s built to handle a lot.

We had somebody yesterday looking at it to do a wedding. They’re very excited because the wedding of 300 people went down to 20, 30 people because of the limitations. And now they can get married at CityView and then go across the street to Cabana. We have roughly 500 seats with at least eight feet apart, rather than six feet. We are like the real definition of social distancing.

What are you looking at when it comes to booking?

They’re all Canadian artists. If you brought someone from outside the country they’d have to quarantine for 14 days, which makes no sense to them. Our stage is very diverse. We’re doing everything from launches for residential towers to weddings, to movies, concerts, DJ events, and god knows what else. We’re open to just about anything.

You said CityView is a financial risk. How thin are the margins?

You know, anything you do outdoors costs four times the amount of money to do indoors. It has to be weatherproof, it has to be weather-resistant. Some things you can’t leave outside overnight or you need security around the clock.

We’re running at 50 per cent capacity because we need to keep six or seven feet between each car. You can’t sell liquor. Realistically 90 per cent or 95 per cent of our revenue is going to have to come from ticket sales. And you can’t just transfer the cost to the customer. People are going to say, wow, I’m not going to pay $70 to go see this.

We probably need a sponsor to really make it work. But it was very important for INK and myself to pivot, to move forward, to be a leader and launch and do something positive. At this point, I’m happy to be part of anything that’s motivating the city. We’re focusing. We’re pivoting, we’re adjusting. And we’re excited.

Are you optimistic about where things are going? I know it’s going to be a long time before big concerts and nightclubs are able to operate again.

I did complain a lot at the beginning, but you could understand my frustration and state of mind having shut down every venue after 37 years of hard work. It was very devastating for me. You have to at some point leave behind the negativity. And I was very negative at the beginning. Just mad at the world. But now I feel much better.

When we look at different cities in the U.S. and Brazil and Peru, I’m happy we are where we are in this city. I’m not being as pushy as I was before. I really understand how difficult it is for everybody to make these decisions about being closed for as long as we’ve been, but I think it was the right solution. I think where we are now is the perfect spot.

I’m happy because I’m bringing on more and more staff every day. You know, we built a team over 37 years and had to dismantle it in 48 hours. In 48 hours, we laid off roughly two and a half thousand people. It really broke my heart. And truthfully, it puts the biggest smile on my face to see people that worked for me for years coming back and being part of the team again.

Is there anything you would change about Toronto’s response to this pandemic?

I hope the city ends up keeping some of these more relaxed bylaws. Before patios were so tough to get. You’d have to barricade it with metal bars, or “you can be here, you can’t be here” – this and that. And you go to Europe, every part of Europe, and there’s patios everywhere. Every little patch of empty space there’s a cute little patio, people having fun.

And sure, some places it’s overdone and now they need to pull back. But there’s a lot of areas where they’ve expanded just four tables or something and it gives the restaurant a little more charm, a little more energy. And now that the city has allowed us, I’m hoping that the pandemic will show them that it’s feasible.  For a city as cosmopolitan as Toronto is, the liquor bylaws are sometimes a little too old-fashioned, a little too behind the times.

Toronto hasn’t moved into Stage 3 of reopening yet, but Ontario announced concerts will be allowed within certain limits: 50 people, social distancing, artists behind plexiglass. Is that something you’re looking at with your nightclubs like Toybox or Rebel?

That’s good for nothing. That’s good for a little church choir maybe. But what am I gonna do, a little a concert for 50 people? It takes 30 to 50 people to set up a concert, between stagehands and performers and sound guys and lighting guys and security. No, no, it doesn’t work. It makes no financial sense whatsoever.

I am very happy with what the city has been doing and has done. I’m a big supporter. But some things sometimes, you know, it’s like, why bother? It’s not even worth having this conversation.

You pivoted Cabana Pool Bar into a restaurant. Do you have plans to do anything like that with Rebel or any of your other venues?

I’m waiting to see what the regulations would be. What can I do and what can I not do? Cabana was the biggest day club in North America, bigger than anything in Vegas even. And we turned it into a restaurant. We’re doing a thousand people average a day sitting down between lunch and dinner to eat. It’s nice and it’s comfortable. It’s safe. The social distancing is very easy for us to do because of the size of the space.

And a space like Rebel, too, we could easily put 100 tables of six that are six to eight feet apart at least. We’re not rushing things because we want to be safe. I want to be able to turn things around like we did with Cabana and make them venues that people can use and that we can be proud of. We want to help the city move forward in every way possible.