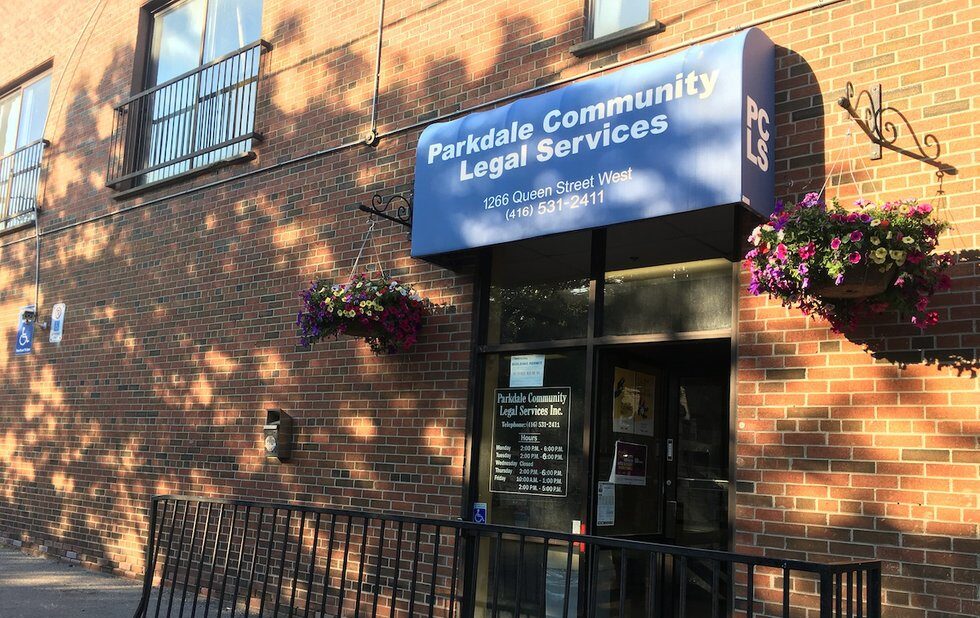 On June 12, LAO announced it will be cutting around $14.5 million to the province’s clinic system. Critics say the cuts disproportionately targets Toronto clinics that work with low-income residents and have actively pushed back against Conservative government policies.

In Toronto, 13 neighbourhood clinics will lose close to $1 million in funding. Parkdale Community Legal Services (PCLS), which has an annual budget of $2.4 million, will see its funding slashed by 45 per cent cut over two years.

“It’s absolutely devastating for our community,” says clinic director Johanna Macdonald, whose clinic specializes in everything from wage theft to unlawful evictions.

Macdonald says the cuts will exacerbate the already troubling circumstances affecting PCLS, which learned last year that it will have to move out of its Queen West offices by July 31. After that date, the clinic will operate out of two temporary locations, one in Parkdale and the other outside of the neighbourhood, until they can find a more permanent space. The clinic will also be facing more serious cuts than most.

According to LAO, that’s because the cost-savings approach involved distributing funds according to communities’ low-income populations and in the case of Parkdale, the demographics of the area it serves are changing. LAO notes that Windsor has a higher number of low-income residents than Parkdale and does more client work, but has received less funding.

In an emailed statement to NOW, Graeme Burk, a spokesperson for LAO, says where to distribute the cuts were “decisions made by Legal Aid Ontario’s board and staff and were purely based on the need to – in light of our changed funding envelope – having to prioritize direct client service.”

Macdonald says however that kind of rationale overlooks the nuances of PCLS’ work and the people it serves in a rapidly gentrifying area. Along with casework, the PCLS is also involved in group organizing, advocacy and runs a training program for law students.

“This neighbourhood is facing intensified gentrification and mass displacement of people that are not captured in a regular low-income measure formula,” says Macdonald. “Persons with mental disabilities who may be in and out of the hospital, individuals who are unstably housed, those fleeing domestic violence, or those who don’t have status, these are all populations that our clinic and downtown clinics serve and who may not be captured in the calculation that Legal Aid Ontario is presenting as justification.”

PCLS will be holding an emergency community meeting on Thursday (June 20) to update residents and clients on the current situation and where their future temporary locations will be. The PCLS will also be accepting donations to offset the budget cuts.

The $14.5 million in cuts is part of the LAO’s bid to save $70 to $75 million for its 2019-2020 fiscal year. According to LAO documents, the other cuts will come from LAO’s global budget, certificates, and immigration and refugee services.

“One dollar spent in legal services saves six dollars in health or corrections,” she says. “The work we do prevents the cascading legal problems that land you in jail.”

In addition to community clinics, the cuts will also affect funding to six specialty clinics that focus on advocacy work like tenants’ rights, workers’ rights and the environment.

One of those clinics is the Advocacy Centre for Tenants Ontario (ACTO), which was informed its funding will be reduced by 25 per cent over two years. The ACTO has helped tenants challenge illegal evictions, protect them against above-guideline rent increases and  Airbnb’s impact on the city’s rental housing supply.

ACTO spokesperson Bahar Shadpour writes in an email to NOW that “ACTO and housing advocates across the clinic system have become victims of the government’s ‘red-tape’ stance on dissent.”

Shadpour says the cuts to the ACTO are particularly troubling in light of other Ford government policies that have harmed tenants, such as scrapping rent control on new rental buildings.

“Now more than ever, tenants need a clinic system to resist the degradation of their rights in the midst of a housing crisis,” says Shadpour.

While LAO has denied Toronto clinics are being specifically targeted for funding cuts, Macdonald says the numbers reflect otherwise.

Says Macdonald: “PCLS is a critical voice and it’s a voice that brings other voices together to speak out about injustices. It’s clear that this is a direct attack on that work.”