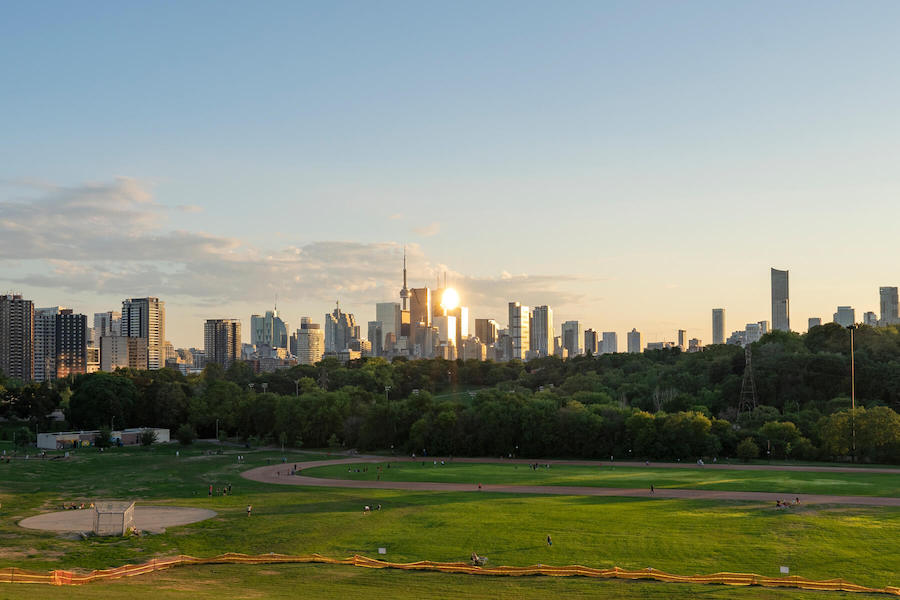 The Trudeau government has promised to unveil “an ambitious green agenda” for the post-pandemic economic recovery in its throne speech once the House reconvenes on September 23.

Both Prime Minister Justin Trudeau and newly appointed finance minister, Chrystia Freeland, have reaffirmed in recent days that Canada’s recovery will be green and just.

In May, Greenpeace Canada wrote to Minister of the Environment and Climate Change Jonathan Wilkinson. The letter outlined a “nature-based recovery” post-pandemic focused on protecting nature and “growing food resilience and regenerative agriculture.” The letter also asks him to “improve community health in cities and towns all across Canada through growing our urban canopies.”

It’s a need underscored in a groundbreaking study published in the Lancet medical journal just weeks into the pandemic hitting North America.

The authors found that neighbourhoods with more green space showed a significantly lower risk of mortality. In other words, trees not only mitigate the effects of climate change, but they also save lives.

Health experts warn that “climate change is the biggest global health threat of the 21st century.” And that “tackling it could be our greatest health opportunity.”

By 2050, temperatures in Tkaronto (Toronto) could exceed 30℃ for 51 days each year. After experiencing the hottest July in 84 years in Tkaronto, we’re already there.

City parks and green spaces in Tkaronto and the Greater Toronto Area are not just buffers to climate change. They are also key to creating more equitable communities.

Throughout the pandemic, we’ve watched this need come alive more than at any other- time in recent memory. We’ve rediscovered the bike paths and city parks where we live.

And as well as places to play, rest and re-energize our bodies and minds for the tasks ahead, parks in our neighbourhoods are turning into community hubs for us to build relationships and to talk about important issues. They’ve also become places to enjoy local food – this summer they were a prime destination for scaled-down Eid-ul-Adha celebrations.

Parks have helped us reconnect with the life of the city, our communities and the people around us. They’ve been key to helping maintain our mental health. But these green spaces and their benefits are not accessible to all.

Examining how these inequities show up geographically and demographically in Toronto paints a clear picture of the need to reimagine how we grow our urban canopy, invest in community gardens and urban agriculture and improve overall access to green space post-pandemic.

As with climate change, the pandemic has hit the most vulnerable the hardest. It is increasing the disparities among us. How cities and governments respond to the post-pandemic recovery will define the lives of generations to come. It’s essential we get this right.

A city within a park, but not for everyone

I was born in the north Etobicoke community of Rexdale. I grew up a few blocks west, in Malton, a stone’s throw from Pearson International Airport. These neighbourhoods are referred to as the “inner suburbs,” “near suburbs,” or “outer city” by urbanists and academics, depending on how they choose to compartmentalize the experiences of people of colour. Rexdale and Malton are communities of mostly new immigrants. Some 75 per cent and 78 per cent, respectively, are “visible minorities,” according to 2016 census data.

This summer, the City of Toronto released new research that maps out COVID-19 cases. North Etobicoke is among the worst-hit areas with 523 cases in West Humber-Clairville (third highest among all neighbourhoods in Tkaronto as of early September).

It’s not the first time health inequities facing those who live in the inner suburbs have been exposed. Residents of Rexdale, Malton and other so-called “disadvantaged” communities also experience significantly higher incidence of diabetes, cardiovascular disease, and rely heavily on food banks. 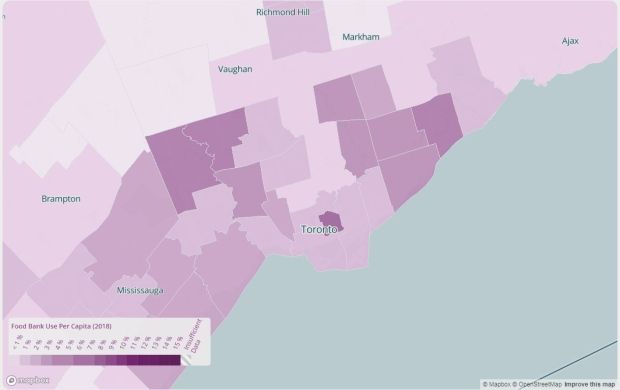 Foodbank use by neighbourhood in Toronto and outlying areas. 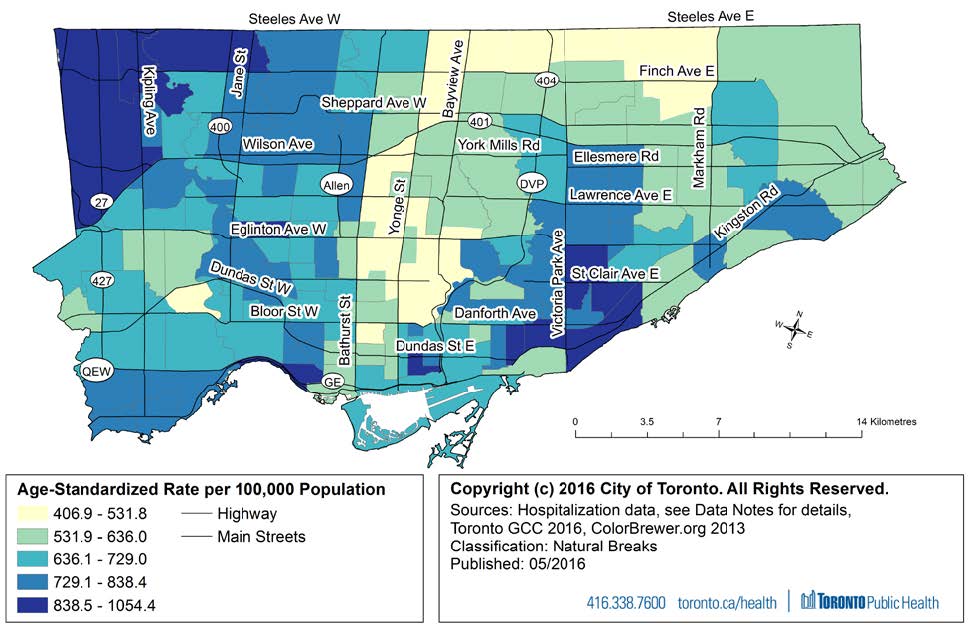 As a case study, I researched existing data to see the connections between green space, equity and COVID-19 in my hometown. The disparities are stark. 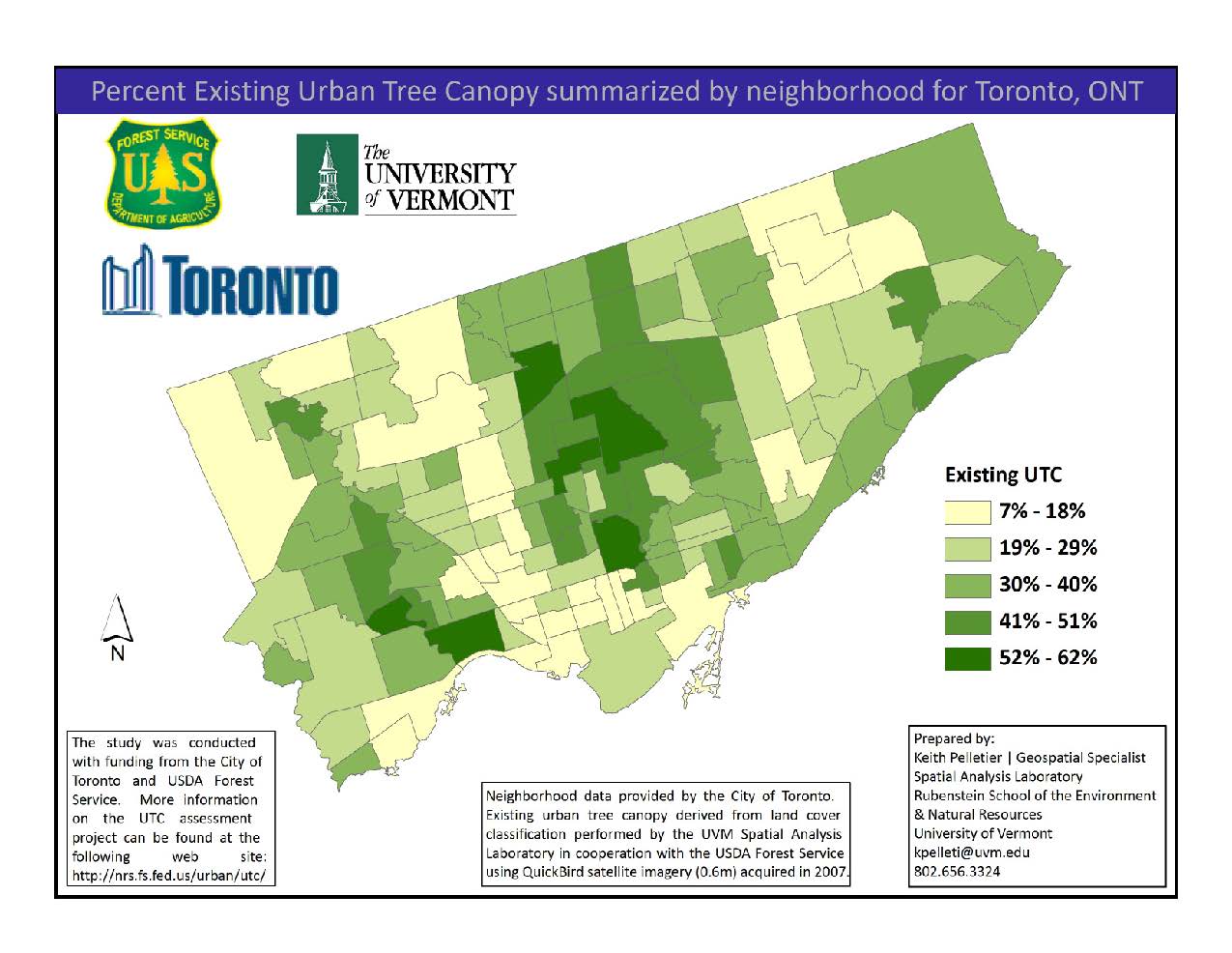 Tree cover by neighbourhood in Toronto.

Tkaronto’s 1,500-plus parks have earned the city accolades – and the moniker, A City Within A Park. But lower-income and racialized communities are often deprived of the nature that enriches our lives and contributes to good health.

Academic research shows us that green spaces and urban forests bring a stunning array of community benefits. They include improved human health and climate to opportunities for urban agriculture and food security. These are all elements we should aspire to in a more just and green society as we recover from COVID-19.

The Indigenous Land Stewardship Circle provides a vision for how High Park’s black oak savannah should be stewarded with Indigenous knowledge.

More must also be done by city officials to foster belonging. Black, Indigenous and other communities of colour are often the targets of racist harassment, surveillance and police violence while trying to enjoy the benefits of nature in our cities.

Council shut down the opportunity this summer to defund policing and reinvest in communities. But those calls to action continue to build – as they should. The value of diverting funds away from policing to heal and not harm us should urgently be put back on the table through initiatives like creating more inclusive green spaces.

It was an earlier crisis that inspired the creation of much of Tkaronto’s parks and river systems of today. The devastation wrought by Hurricane Hazel in 1954 flooded huge areas of the city, tragically killing 81 people and leaving thousands homeless.

Restoring the city’s rivers and ravines took on new urgency following this catastrophic event. Conservation flourished in its aftermath with the creation of the Toronto and Region Conservation Authority.

The work undertaken by the TRCA enhanced the livability of our neighbourhoods. But more than that, it kept us safe from future storms and heavy rains while creating space for wildlife to thrive.

This time, it’s not a hurricane threatening our city. It’s a global pandemic along with growing social inequities and environmental breakdown.

In these overlapping dangers, we have an opportunity to reimagine our relationship with urban green space. And build more liveable, resilient and equitable cities, from my hometown to yours.

Farrah Khan and Progress Toronto’s Shannon Holness expand on their essays in the latest episode of the NOW What podcast, available on Apple Podcasts and streaming on Spotify or playable below: