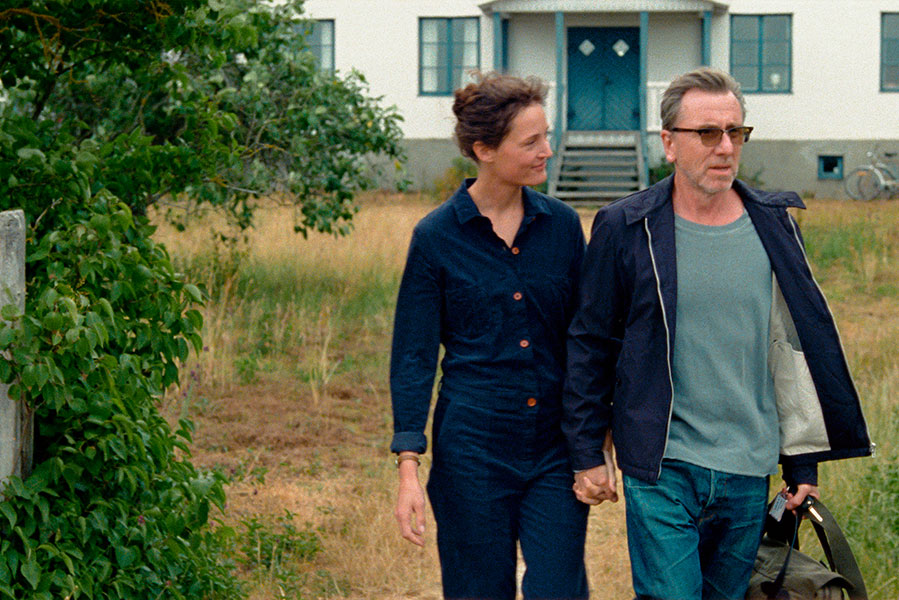 Ingmar Bergman looms large over French director Hansen-Løve’s English-language debut. Set on the Swedish island of Fårö, where the world cinema icon lived, died and shot several movies, Bergman Island is full of cinephile references, but you don’t have to be steeped in the canon to appreciate this tale of creative block and summer romance. It’s squarely in the arthouse subgenre of rich Europeans on vacation, but via a meta-narrative: Filmmaker couple Chris and Tony (Vicky Krieps and Tim Roth) make a pilgrimage to the island. He’s a successful horror director, she’s struggling to write a screenplay. While drinking in the blue sky and foliage, which Hansen-Løve and DP Denis Lenoir frame with an inviting openness in marked contrast to Bergman’s stark interiority, Chris unspools the story of young filmmaker Amy (Mia Wasikowska), who seems to lose all interest in Swedish cinema upon reinkindling a romance with an extremely attractive and extremely unavailable old flame (Anders Danielsen Lie). Amy’s Fårö visit is free from the professional agonies of Chris’s trip, but full of the kind of ambiguities that will suck an audience into a sweat-soaked summer fling. There’s a lot going on in this movie, but it often doesn’t feel like it. Hansen-Løve brings her signature subtleness to bear on characters caught between insularity and openness, and she finds a way to go in both directions at once by emphasizing how our physical surrounds can have unpredictable and complicating effects on our thoughts and feelings. 113 min. Now playing at TIFF Bell Lightbox, available on demand October 22. NNNN (Kevin Ritchie)

“Dan Stevens plays a German sex robot” is a great way to secure production funding for your speculative comedy, but actor and filmmaker Maria Schrader (Love Life, Unorthodox) has a lot more on her mind than a single joke. Maren Eggert is Alma, a skeptical Berlin museum researcher who – as a quid-pro-quo to secure financing for an elaborate archaeological project – is assigned to evaluate an android. His name is Tom (Stevens), he speaks German with a slight English accent, and he is designed to be her perfect partner in every way. It’s really weird, until it isn’t. Toni Erdmann’s Sandra Hüller is also around, in an administrative capacity. Schrader doesn’t push the sci-fi aspects of the story; her characters live in a recognizable Berlin of coffee shops and offices, which helps us focus on Alma and Tom without distraction. And as we get to know them both, we see where Schrader’s real interest lies: in a slightly uncomfortable examination of the way relationships are built, and whether we really want to find ourselves in the people we love. 108 min. Subtitled. In theatres and available on digital and on demand. NNNN (Norman Wilner)

In 1386, French knight Jean de Carrouges and squire Jacques Le Gris fought to the death over the accusation that Le Gris had raped de Carrouges’s wife, Marguerite. The Last Duel rolls back through their shared history to see how these former comrades became bitter rivals – and strangely enough, the answer isn’t “because one assaulted the other’s wife.” No, The Last Duel – which stars Matt Damon as de Carrouges, Adam Driver as Le Gris and Jodie Comer as Marguerite – has its own theories. The film rolls us through each character’s version of events, each one coloured by jealousy, entitlement and/or betrayal, all rendered with a fairly heavy hand by producer/director Scott, who feels far more invested in the action beats than he does in the story’s thornier emotional and cultural aspects. (He’s much happier to let Ben Affleck goof around as the louche Count Pierre of Alençon, who becomes Le Gris’s benefactor.) It may also be that co-writers Damon, Affleck and Nicole Holofcener wind up marginalizing Comer’s Marguerite even when they’re supposed to be presenting her perspective. Or maybe, as with so many of Scott’s films, there’s a much longer director’s cut coming that’ll set everything right. I’d suggest waiting for that one. 153 min. Some subtitles. Now playing in theatres. NN (NW)

Luminato and Canadian Stage joined forces for New Monuments, a graceful, hypnotic and confrontational meditation on Canadian history through dance. The film is directed by exciting newcomer Karen Chapman, produced by Director X and Umbereen Inayet, who previously collaborated at Nuit Blanche, and choreographed by Tanisha Scott, featuring a familiar roster of artists and activists like Esie Mensah, Raven Wingz and Rodney Diverlus. The storytelling begins with Indigenous lore, which is interrupted by colonization, and then skips its way through slavery, migrant labourers from China and India, all the way to the past summer, when the Ryerson statue was pulled down. There is a lot of trauma there, but also a search for healing through movement. 54 min. Available to stream on CBC Gem Friday (October 15) at 8pm. NNN (Radheyan Simonpillai)

The Velvet Underground emerged from the New York art scene of the 60s – a pet project of Andy Warhol’s Factory, pairing rock-and-roller Lou Reed with drone composer John Cale and adding Sterling Morrison on guitar and Maureen Tucker on drums. German singer and poet Nico sang some of their songs. They brought pop art to pop music and they were arguably as influential as the Beatles. This is the first documentary from veteran filmmaker Haynes, who used the band’s songs and elements of Reed’s life in his 1998 glam drama Velvet Goldmine, and he’s constructed a film that’s as challenging and electric as its subjects, borrowing the chaotic aesthetic of Jack Smith’s Flaming Creatures and the films of Jonas Mekas (who’s one of half a dozen invaluable interview subjects, as are Cale and Tucker) and then shifting to a cleaner, more conventional format as the band’s music moves from the experimental to the more straight-ahead rock sound Reed ultimately preferred. It’s a celebration of a brief window of genius, and an elegy for the environment in which that genius gestated – as sultry as Venus In Furs, as joyous as Sweet Jane and as melancholy as Reed’s subsequent solo work. He knew what he’d lost by moving on. So does Haynes. 121 min. Now streaming on Apple TV+. NNNNN (NW)

Needle In A Timestack

They Who Surround Us

The 15th edition of the annual horror, sci-fi and action film festival is on demand and available across Canada, rolling out two or three movies each day – and keeping those films online through Sunday. If you missed the charming British documentary Alien On Stage or the gonzo Ricky Bates Jr. coven comedy King Knight at Fantasia, here’s another chance to see them; Nick Gillespie’s frenzied Paul Dood’s Deadly Lunch Break is also worth a look, though that one doesn’t go live until Sunday. And I’m curious to see Christopher Donaldson’s Ditched, which is billed as “tense, survivalist siege horror” in the mode of John Carpenter’s Assault On Precinct 13… only in a forest.

After last night’s outdoor screening of Heather Hatch’s Wochiigii Io – End Of The Peace, the rest of this 22nd festival of ecologically inclined documentaries is entirely online. But if you missed Hatch’s film, it’s still available to stream across Canada on the festival’s virtual platform, along with almost everything else; tickets are $10 for a single feature, and $12 for the individual shorts programs, though a virtual pass can be had for only $35. The program includes Hubert Caron-Guay’s Resources, which follows a group of asylum seekers from Mexico working in the Quebec meat-processing industry while awaiting a decision on their refugee status, and Shannon Walsh’s The Gig Is Up, which explores the gig economy through an increasingly grim lens. This year’s closing-night gala, Last Of The Right Whales (October 24, 7 pm, virtual screening), will be followed by a live Q&A with director Nadine Pequeneza and composer Deanna H. Choi. That one’s for Ontario viewers only.

Kaneto Shindo’s 1964 horror film-as-morality play – starring Nobuko Otowa and Jitsuko Yoshimura as two women in war-torn medieval Japan who prey on deserters who find themselves in their lonely marsh, and Kei Sato as a returning conscript who destabilizes their relationship by starting a sexual relationship with the younger of the two – was one of Criterion’s earliest DVD releases two decades ago, but the compression technology of the time didn’t exactly offer the best presentation of cinematographer Kiyomi Kuroda’s moody, shadow-draped visual design.

This newly remastered Blu-ray offers a fresh look at the film, its frequent backdrops of shifting reeds no longer subject to video noise or shimmering, the better to focus on the performances – and the fine details of the demon mask that becomes a key element of the story. The Blu-ray also adds a previously unavailable audio commentary with Shindo, Yoshimura and Sato (recorded in 2001 for the UK Masters Of Cinema release) to the previous Criterion interview with Shindo and some archival footage shot by Sato on the set.