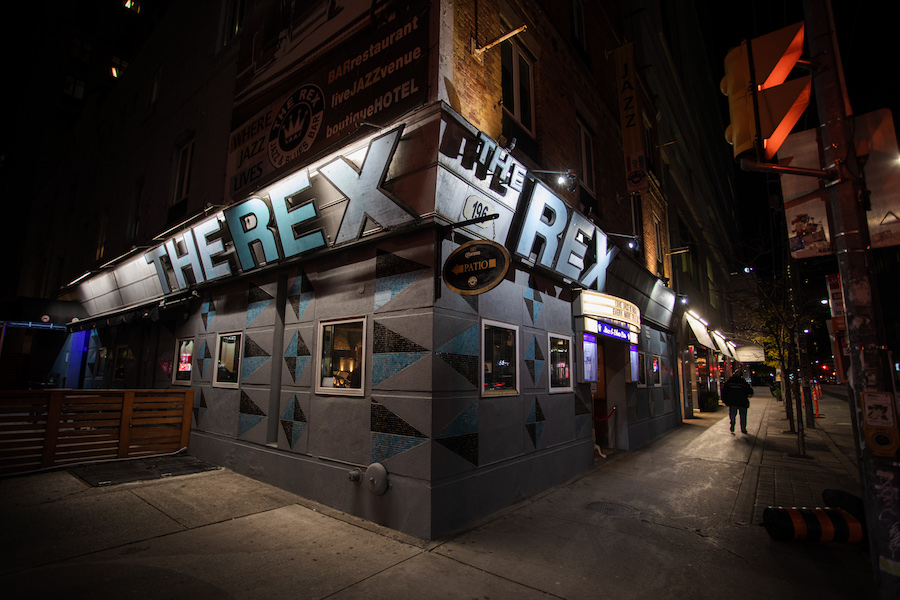 The Rex Hotel is once again one of the busiest music venues in Toronto.

While many spots have come back to life in fits and starts, with a couple concerts here, a couple shows there, the Rex is back to two shows every night, seven nights a week. That’s slightly less than the 18 or 19 a week they used to put on before the pandemic, but it’s a return to what the Rex is known for: stop in any night of the week and you can see a high-quality jazz show..

“We’ve always been that place where if you wanted to see live jazz, you know you can always come to the Rex,” says owner/general manager Avi Ross. “It doesn’t matter if it’s Sunday or Tuesday, you’ll see something spectacular. Finally, we’re able to offer that again.”

Located right on Queen West, just west of University, the Rex is the kind of place you take for granted until its suddenly gone quiet. It’s been the most consistent home of jazz in Toronto since the mid-80s, though if you didn’t know any better you’d probably assume it was a lot longer than that.

The history of the Rex itself stretches much further. Ross’s grandfather Jack Ross bought the place with a partner in 1951, but it was already a hotel and beer hall long before then. Exactly how long is unclear.

City agency Toronto Building had a fire in the early 1920s and lost a lot of their records, including the date the Rex was built.

Sipping a coffee with Ross on a recent afternoon, it feels a bit like The Shining. With old jazz playing behind me and a long-time regular sipping a beer at the bar, it feels like it’s always been here.

A bartender at the Rex

Ross’s father Bob Ross was the first to introduce jazz in the 80s, first as a casual experiment.

“It was a very rowdy crowd in here back then,” says Ross. “You came in to get drunk after a hard day’s work, then go home and pass out. Some of the people who drank here were musicians, and one day my father asked one, ‘You want to come try playing your trumpet at the Rex? I’ll pay you a rum and Coke.’”

The elder Ross has recounted the story elsewhere, and in his version the musician was sax player DT Thompson and the payment was a rye and coke. Either way, the regulars ate it up and soon enough there was music every night. The Rex’s music manager, Tom Tytel, has continued to book the room for decades.

The younger Ross has memories of the Rex that go back to when he was four or five years old, though it was likely later when he started running around more often.

“I’d pour a beer for someone, they’d give me a loonie, I’d take it to the back where the pool table used to be and spend my tip on pool,” he recounts. “I fell in love with it. You’d get everyone here. Low income, high income, lawyers, artists, Queen Street hipsters. It doesn’t discriminate, and I love that.”

Eventually, after graduating from university with a degree in kinesiology, he returned to work at the Rex and eventually started running it with Tytel and his dad. Now, he’s taken the reins. His father, who just turned 80, retired during the pandemic.

“He used to be in here every day at seven in the morning, schmoozing with hotel guests,” he says. “He’s such a people person, but during the pandemic you couldn’t really do that.”

He still comes around sometimes, but now when he does it’s at night to catch a show – something he rarely got to do before.

The Rex was one of the early venues to start regularly booking shows again, partially because they don’t operate the same way most bigger multi-genre spots do. Since they’re smaller and serve food, they don’t need to pack the bar to avoid losing money. And many of their regular artists are local, so they don’t have to worry about artists crossing the border or losing money to make one Canadian tour stop.

Roberto Occhipinti at the Rex as part of their Juno series

You can still catch many of the same regulars at the Rex on a weekly basis: Tim Shia’s Worst Pop Band Ever jazzing up pop songs, Chris Gale playing matchmaker to musicians who show up for their Classic Rex Jams, regular performances from students at U of T, Humber and York. They were eager to get back onstage as soon as they could, and the Rex was quickly back to being homebase.

The first concert back this summer (after a brief run last year when music bars could have up to 50 people) happened on July 1 outside on their patio. City bylaws didn’t allow them to use amplification, but you could still hear the horns and whether you were sitting outside or just walking by it made the city finally feel alive again.

“It was quite beautiful just to watch it happen,” Ross says. “It was emotional, like oh, we got music back. That gave us hope that people still want it.”

At first it was just duos and trios, distanced tables and plexiglass everywhere. Now they go up to bands of six or seven. But there’s no longer any pass-the-hat tip system. All shows are now $10 or $15, added to your bill at the end of the night. And instead of a shoulder-to-shoulder social atmosphere, it’s more of a theatre-style setup with all tables pointed at the stage. The focus is fully on the music.

The hotel is picking up again. There are about 30 rooms and they’re pretty affordable for the location at around $120 a night – and you can head down to catch some jazz whenever you want.

The big band performances haven’t come back yet, and that’s what Ross says he misses the most. The last Monday of every month used to be John Macleod’s Rex Hotel Orchestra, a 20-piece big band that filled the room.

“It’s quite powerful,” says Ross. “I can’t wait til we can get back there.”

On a recent night while Worst Pop Band Ever plays a riff on a White Stripes song, a dad and his teen son watch in front of the stage in front of two French guys sharing a bottle of wine. Over in the booths, a pair of groups of 20-somethings share nachos while an older couple sits at the bar.

The room might be a bit more distanced and this stretch of Queen isn’t the counter-cultural haven it once was (though there are cannabis stores everywhere you look), but the Rex still feels like it always did.

“It’s always been a place where anyone could come,” says Ross. “Music speaks to everyone. It’s a common language. So why does it matter where you’re from or how old you are?”