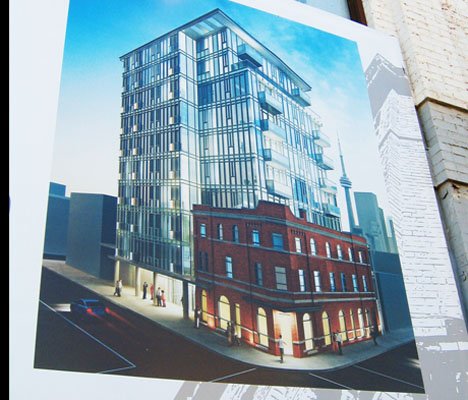 Most locals know it as the old Canada House Tavern, a rough-and-tumble place where street folk used to hang for the cheap beer and proximity to area drop-ins.

But back at the turn of the late 19th century when it was the stylish Kormann House Hotel, the three-storey Renaissance Revival charmer on the southwest corner of Queen and Sherbourne anchored a happening area with thriving businesses, movie theatres and the splendid Moss Park as its backdrop.

New glory days, in the form of gentrification creeping along Queen East, are just around the corner – or so real estate developers think.

Enter KC Developments, the people behind the 45-storey Spire at Adelaide and Church and the twin-tower proposal at College Park.

The group’s plans for the Canada House site are decidedly more modest – a 59-unit 10-storey glass condo tower. (There’s also a proposal for a seven-storey, 29-unit number just down the street).

More condos? The scrawl on the notice board out front asks.

The developer plans to keep the north and east facades of the tavern intact. The proposed tower will rise above and behind it.

Keeping the front of the original building is worthwhile. It’s the cornice, stepped parapet and brickwork, after all, that give the old hotel its heritage value. (Curiously, Kormann House was only included on the city’s list of heritage properties in 2007).

But is that enough?

Maintaining Toronto’s architectural history should always be a goal of development proposals.

But by saving small pieces of our landmarks, are we actually “preserving” our history or just, well, a facade?

T.O. is full of bad examples of beautiful buildings that have been gutted and their fronts left standing, supposedly in the name of conservation.

In fact, we’re one of the worst perpetrators of facadism in North America, and this fact became the focal point of a discussion on the topic at an American Institute for Conservation annual conference at Stanford a couple of years back. (You know there’s a problem when the Americans take notice.)

Purists say heritage sites should be preserved in their entirety. For them, it’s all or nothing. Others argue that saving remnants of our architectural history, however small, is better than nothing.

I’m with the purists.

Barring safety or structural issues, there’s no reason why developers can’t build around or above our heritage landmarks.

Tridel, historically not exactly a friend of heritage, has gone to great lengths to save the James Cooper mansion – literally moving it in its entirety – to make room for its condo development at Sherbourne and Bloor.

A somewhat expensive proposition to be sure, but in the end it’s the livability and creativity of our city that are being enhanced.

It’s also in developers’ financial interests to save these jewels. When it comes to condo sales, heritage sells.