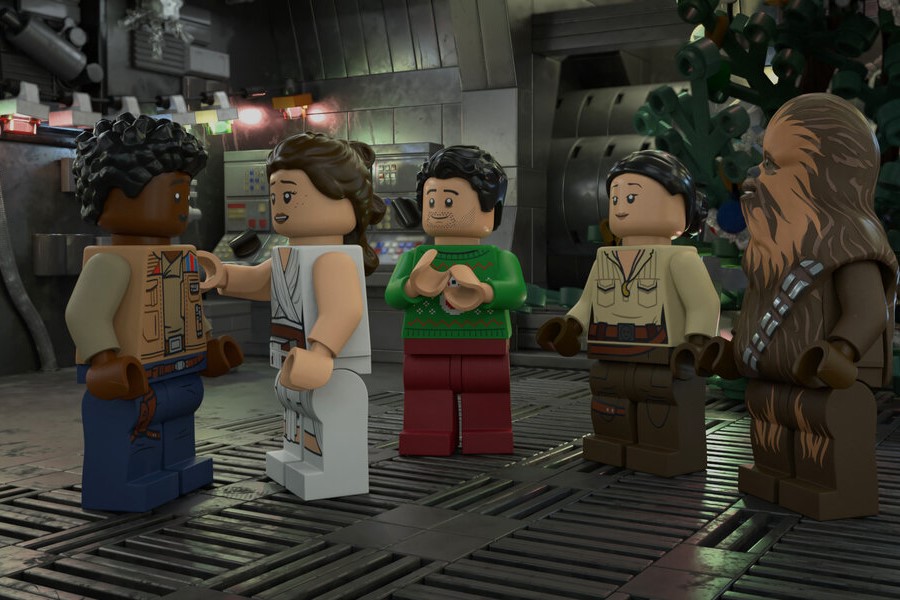 It's all your favourite Star Wars pals, now in licensed LEGO form!

The original Star Wars Holiday Special is one of the worst ideas George Lucas ever had – a 1978 made-for-TV variety show that reunites the cast of the sci-fi blockbuster to stand around trying to sell the idea of a sacred Wookiee holiday of Life Day. (At least it introduced Boba Fett in a brief animated sequence.)

The LEGO Star Wars Holiday Special does not re-create that stiff, misbegotten nightmare in brick form, or even reference it beyond the acknowledgment of Life Day as a thing; instead, it’s a goof on the entire Skywalker Saga, with Rey (Helen Sadler, who voiced the minifig character in the 2016 series The Resistance Rises) using an ancient Jedi portal thingie to jump into key moments from the entire franchise – picking up Luke, Darth Vader, Kylo Ren and the Emperor along the way – while her friends wait for her to show up for a party.

It’s a pleasant enough diversion, offering silly jokes for kids and the grown-up nerdy joy of seeing LEGO versions of crucial scenes from the movies. But it’s also entirely insubstantial, not even trying to do anything with the holiday gimmick or the decades of investment we have in this galaxy. The ersatz feel is further enhanced by the fact that most of the characters are voiced by soundalike actors; only Kelly Marie Tran, Billy Dee Williams and Anthony Daniels return as Rose, Lando and C-3PO.

I couldn’t help wondering how much better this would have been with even the slightest input from Philip Lord and Christopher Miller, who perfected the template for this sort of thing with their LEGO Movie franchise. (I guess Lucasfilm firing them from Solo: A Star Wars Story made that sort of impossible, huh.)

Instead, The LEGO Star Wars Holiday Special is more in line with the surface-level parodies of the property previously attempted on Robot Chicken and Family Guy – and indeed the special’s vision of the Emperor owes a lot to Family Guy creator Seth MacFarlane’s cranky, needy interpretation of that character. (He’s voiced by Trevor Devall here.)

And it’s fine. It’s all fine. But it could have been so much more: Life Day is about family, after all, and the stories of the Star Wars movies are so deeply entangled in family. And it’s a little frustrating to watch this special fail to capitalize on any of that stuff, even for the sake of a gag.

It comes close, when all the timey-wimey stuff gives Kylo Ren (Matthew Wood) the chance to meet grandpa Darth Vader (Matt Sloan) and be the world’s most obnoxious fanboy, but you can feel the writers cringe from any real exploration of their relationship, either for comedy or tragedy. They seem a lot more comfortable making Porg jokes. Kids love Porgs.