The best Toronto albums of 2020

We weren't able to see many of them live, but local artists still gave us a lot to listen to this year 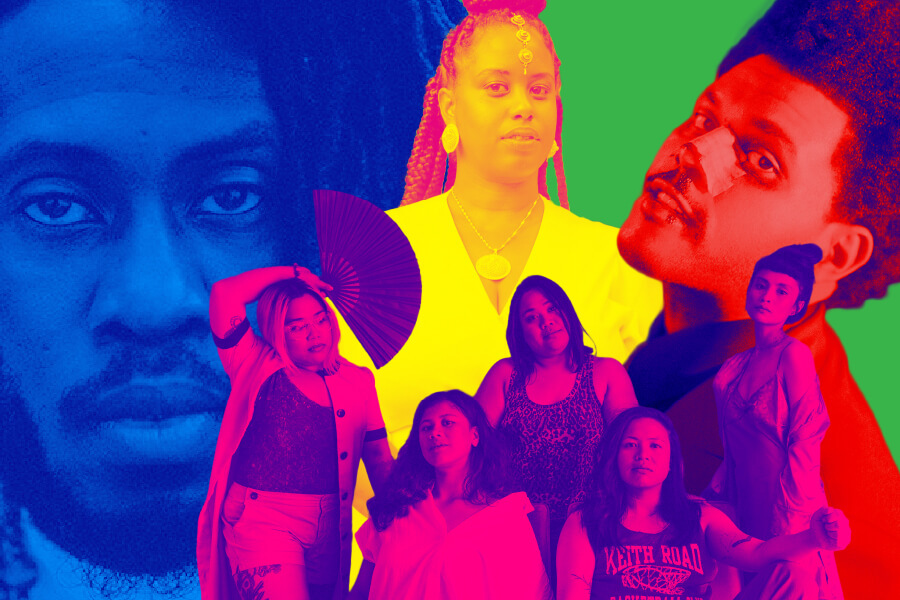 From hip-hop beatscapes to celestial R&B gong punk, local artists didn’t let their creativity dip despite all the challenges they faced during this pandemic year. It’s a shame we couldn’t support the music live and in person, but here are the Toronto albums that were filling our ears while we stayed home this year.

Heavy Light came out just weeks before the COVID-19 shutdown, and now it feels like a time capsule. It’s simultaneously Meg Remy’s most personal album and her most collective. Her first-person form gets unusually high usage as she sings about her teen years. The music is lush and joyful as ever, and she’s still a clear-eyed critic of American exceptionalism. She leans on a hugely talented group of musicians crammed into a studio together, including some of Toronto’s unheralded powerhouse singers (Kritty Uranowski, James Baley, Basia Bulat, Dorothea Paas, etc.). It’s the musical feeling of personal trauma worked out through community support. It’ll be a while before we can show up for each other like that again, at least in person.

2. The Weeknd: After Hours

Abel Tesfaye was advised to delay his fourth official Weeknd album after we all retreated indoors, but he wisely put it out anyway. Blinding Lights still became a ubiquitous hit, and After Hours was everywhere. The Weeknd isn’t making claustrophobic loft music anymore (break out House Of Balloons next time you start to feel quarantine malaise and want to wallow), but he’s still an expert at creating and sustaining a mood. His newfound taste for 80s pop flavour suits his heart-rending R&B perfectly, including a Phil Collins drum break that puts a smile on my face every time I hear it. Easily his best album since his mixtape days.

It took longer than expected for Lido Pimienta to follow up her Polaris Prize-winning 2016 album La Papessa, but it was worth the wait. She’s said Miss Colombia is about the duality of longing for your country of origin while feeling you don’t quite belong there anymore, and also feeling you aren’t fully embraced by the country you call home. It’s also about trying to define what home means. She combines Afro-Caribbean traditions with soundscapes that reach into the future and her own unparalleled voice. It could only have come from her.

In a year when we all understood the vital importance of local businesses, and of places to be out in the world with other people, Andy Shauf made us miss and appreciate the Skyline. The classic Parkdale diner/neighbourhood hangout is the setting of this album. Through expertly orchestrated folk-rock, Shauf crafts a tale that is wistful, sweet, philosophical, self-deprecating and relatable. The tour was shaping up to elevate Shauf to a new level of popularity, so it’s a shame he never got to go. Still, this was something nice to come back to.

There are few electronic musicians who exude warmth quite like Dan Snaith, and we really needed it this year. His first Caribou album in six years was a soothing balm during a very anxious time, full of plush vocals and lived-in melodies. The title speaks to emotional whiplash, which manifests through sudden beat switches or codas in nearly every song. But it still feels gentle, a feat of quiet endurance. Let’s not argue over whether we can still consider Caribou a “Toronto act.” More than ever, Caribou’s music feels like its own sonic universe.

This is the moment Junia-T goes from rapper to super-producer. The album has “opus” written all over it. He was meticulous in how he built these beat-based compositions from scratch. It’s packed with features from talented Canadian singers and MCs from Sean Leon to Jessie Reyez (Junia-T is her touring DJ), but much like Montreal’s Kaytranada, no matter how many guests he has, his cohesive sound that is always unmistakably him. It’s like he’s producing in 4D.

“We carry our ancestors with every step and every decision we make,” begins the short film that Witch Prophet’s Ayo Leilani and FroCasso made to introduce her sophomore album at this year’s Polaris Prize virtual gala. You can hear that generational focus on DNA Activation, an impossibly cool and laid-back mix of soul, Ethio-jazz and 90s trip-hop. Leilani floats above it all, mixing family history with learned mythology and her own Eritrean and Ethiopian roots. It feels like an invitation deep into her being.

Pantayo describe their music as “something like lo-fi gong punk celestial R&B” and it’s a fitting description. The group of Filipinx-Canadians formed back in 2012 to explore kulintang, an ancient form of gong music from the Southern Philippines. But they’ve expanded way beyond those origins for this debut album, using the gongs as a hypnotic rhythmic foundation for all sorts of sounds. Produced by Yamantaka // Sonic Titan’s Alaska B, the album has laid-back R&B ballads, shit-kicking punk anthems and everything in between. It’s not an exaggeration to say it’s unlike anything else we’ve heard this year.

9. dvsn: A Muse In Her Feelings

On their third album, the OVO duo of Paul “Nineteen85” Jeffries and Daniel Daley refined their craft, doubling down on rich-sounding slow-jams, with some reggae and faster club rhythms mixed in. It revels in subtle textures, samples and retro riffs that deepen dvsn’s sonic affinity with 90s R&B. They didn’t get to do a proper tour, but they did have probably the year’s most successful run playing steamy drive-in concerts, specifically at Toronto’s new City-View Drive-In. There were more than a few cars a-rockin’.

On her self-released debut solo album, Nyssa is both a keen student of rock and roll mythology and someone who doesn’t mind pulling it apart. She’s got a heavy-duty voice and a palpable swagger as she distills decades of pop and rock, from Motown to Dolly Parton to the Pretenders, into danceable synth-pop. She’s got a country-style flair for simple but powerful storytelling and a theatrical flair, turning each song into a self-contained short story with a common theme: outlaw women, women on the edge, women at odds with the modern world.

This Toronto rapper was already showing a ton of promise with their relatable point of view and humour-laced bars, but when they leaned into swinging Kaytranada-esque groove beats they hit another level. One to keep an eye on next year.

The OBGMs: The Ends (Black Box)

The OBGMs were not shy talking up this breakout album – a perspective hardened by years being overlooked in a very white Toronto punk scene – but the confidence suits them. You can hear their swagger in this set of songs, which runs the gamut from breakneck hardcore to psych, grunge and punk anthems destined for Canadian rock radio. The perfect mix of melody and energy.

Josh McIntyre took a little break from his dream-pop duo Prince Innocence for an album that sounds like the future. A textured mix of house, downtempo, hip-hop and ambient productionthe album weaves a sonic narrative that feels like how we exist online – not just because the samples come from random vlogs and videos from all corners of the internet, but also because of the way it expresses multiple identities at once.

Still, TOBi’s 2019 debut full-length, was a tender self-portrait in soul. This project is looser and less cohesive, but it might forecast even higher highs for the Lagos-born artist. There are elements of hip-hop, afrobeats, jazz, R&B and soul, but he’s got a soulful sing-song flow that comes through on every song. He oozes personality in a way that could turn him into A Thing any minute now.

Some of us have spent the quarantine discovering new chip flavours. Former Attack In Black songwriter Daniel Romano spent it making at least 10 full albums. From collaborations with Fucked Up and Tool’s Danny Carey to full-album Bob Dylan covers to more traditional (for him) albums of psych, punk and country, it was all quality. We don’t really know how he did it.

Mustafa is on the 2021 Polaris Music Prize shortlist for his album When Smoke Rises.

That’s not all. This year had so much good and strange stuff, we thought we’d give you some bonus content. Here, you’ll find fantastic one-offs from artists like NOW cover boy Mustafa, quarantine livestreams, socially distant collaborations, even an incendiary version of the Canadian national anthem.

Lee Paradise: Message To The Past

LAL: End Of This World Together

Luka Kuplowsky & The Stardust Players: Live At The Golden Lion

Fiver & The Atlantic School Of Spontaneous Composition: (It Won’t Be Long) And I’ll Be Hating You

Savannah Ré: Where You Are

Jessie Reyez: O Canada (on top of the CN Tower)

Just John: This Is Fate

Absolutely Free: The Office / The Community