Toronto in the 2010s: Why we can’t forget the lessons of the decade

It’s clear that the city is growing – but in what direction? 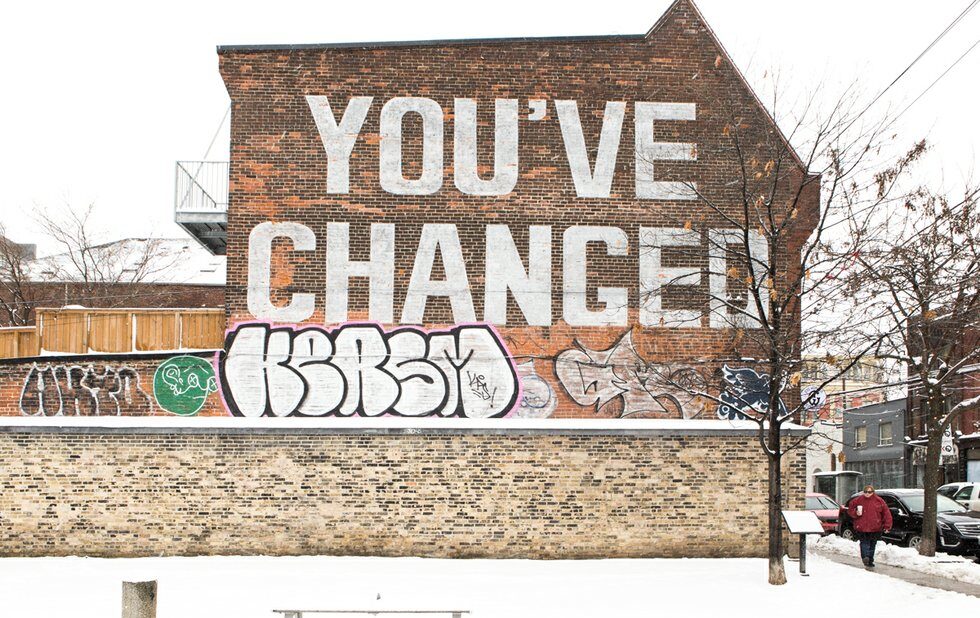 Jesse Harriss Youve Changed mural at Queen and Dovercourt, completed in October 2012, became a sign of the times.

“IT WAS ALL BETTER WHEN WE MOVED TOGETHER.”

As a guiding philosophy, nostalgia is often quicksand, but this phrase, wheat-pasted onto the back wall of a restaurant at Queen and Dovercourt, is instructive. It’s surrounded by the names of DJs and musicians – from A-Trak to Bambii, the late DJ Mehdi to Nick Holder, Omar-S to Yes Yes Y’All – the “we” who once played parties thrown by the co-owners of Otto’s Bierhalle in their former lives as club promoters at Wrongbar and through Mansion from 2008 to 2015.

I’ve thought about this small tribute often. It reveals what came before, like a modern-day cave painting, offering proof of people coming together to unfurl and connect. That’s a rare sight in a city that, when it comes to music culture, often seems to start from scratch, lost in something more harmful than nostalgia: forgetting.

At the start of the decade, I was a baby reporter writing in these very pages about local artists, imagining how they might change the city’s (and country’s) cultural identity. Toronto’s culture has certainly shifted, but there have also been big changes in the ways Torontonians experience it. As the decade ends, it’s clear that the city is growing – but in what direction?

Since 2010, Toronto has become the global city of its own dreams through rapid development. The dense skyline heralds the future, as do high-profile transit initiatives such as the UP Express airport link, Presto electronic payment system and modernized streetcar vehicles. A Ryerson University comparative analysis showed that as of 2018 Toronto was the fastest-growing city in North America (NYC experienced a net loss). Between 2011 and 2019 the number of “visible minorities” climbed two points to 51.5 per cent – we’re now over half of the city’s population. Public representatives on the international stage are appropriately diverse: from Drake to Alessia Cara, Stephan James and Lilly Singh. And, of course, this year the city cheered the Toronto Raptors on to their first NBA Championship.

But, as in many other cities, growth has prioritized monoculture over the hyper-local. The decade began with the demise of the club district. Venue closures became a news-cycle fixture as did reporting on noise complaints directed at bars in mixed-use neighbourhoods such as Parkdale and the Danforth. Redevelopment, rising rents and property taxes wiped out bars, venues, cafés and other gathering spaces. Many new venues that did open – from the Hoxton to Less Bar – lived half-lives. Earlier this year in Spacing Magazine, NOW contributor Michael Rancic reported that Toronto has lost more than one live venue per month since January 2017.

Arts media is suffering. Newspapers have slashed resources, mandates and arts sections, and multiple alt-weeklies shut down. Legacy publications like Exclaim! and Urbanology still exist and Western Canada alt-mag BeatRoute recently expanded into Ontario. This week, it was announced that this paper, independent for nearly 40 years, has been acquired by Media Central, which aims to consolidate multiple alternative media properties. But blogs and other local digital communities have largely been swallowed by brand partnerships or disappeared, unable to compete with the user experience of YouTube, Spotify, Instagram and SoundCloud. Still, earlier this year, Flow 93.5 FM officially relaunched after spending most of the decade – the biggest for local hip-hop and R&B ever – in commercial radio purgatory.

When it comes to music culture, Toronto often seems to start from scratch, lost in something more harmful than nostalgia: forgetting.

In 2012, Toronto took on the official Music City designation, aligning culture with an economic growth strategy that encourages corporatization and commerce. Music City in 2019 looks bleak, for real: a seemingly endless number of vape shops and fitness studios with dorky names riffing on “the 6ix,” corporate sponsorships of music showcases, prizes and digital content by financial institutions and Big Weed (note: I’m involved with and have received payment from these vendors) as well as a housing crisis that cuts off the root of emergent culture: the community of working artists who help make it.

The paternalistic growth spurt has resulted in a transient local culture, with big-box solutions that favour trending sounds, neat narratives and a kind of passivity from both artist and audience. This is why every couple of years you’ll come across an article about “Toronto’s new musical renaissance.” Even though there are more ways than ever of promoting your music or label via the internet, there’s less incentive to understand why any of it matters.

Despite these hurdles, people are actively working toward ensuring the city’s cultural future. The city is represented in the mainstream and underground by artists across genres such as Jessie Reyez, Ebhoni, PUP, Ciel, U.S. Girls, Jeremy Dutcher and more. Women are at the helm of music-minded community-building, like ISO Radio, Venus Fest, Manifesto and the Blue Crane Agency. City staff recently recommended exemptions or grants for music venues to offset rising tax rates. And the cluster of cultural organizations housed at Artscape Daniels Launchpad has been open for over a year now, ostensibly serving arts practitioners and workers by providing tools, mentorship and studio space.

Writers continue to provide crucial aspect to the city’s various music histories. Denise Benson’s 2016 book, Then & Now, is an important look at Toronto’s social spaces and nightlife culture. The Flyer Vault: 150 Years Of Toronto Concert History by Daniel Tate and Rob Bowman is a valuable archive of the live music market. And Tomorrow Is Too Late by Derek Emerson and Shawn Chirrey documents the 80s hardcore scene, another sound and genre that once put Toronto on the map. Over the last decade, Mark Campbell and the Northside Hip Hop Archive established a digital repository, and toured their collection across Canada. And rap fans can look for Del Cowie’s forthcoming book on Toronto’s unique history, This Is A Throwdown.

A few doors down from Otto’s, rising over the hubbub of Queen is Jesse Harris’s unmissable “YOU’VE CHANGED” mural. In 2012, when the mural was completed, it spoke to the rehabilitation efforts of neighbouring CAMH, but it was also a more elegant rephrasing of “Drake you ho this is all your fault,” the anti-gentrification slogan of the aughts. That was a reference to the hospitality chain and not the rapper, but it’s fun to think about how these homonymous behemoths were major local cultural change agents in the first two decades of this millennium.

Both the Drake Hotel and Drake the rapper have given me fond memories and new ways of seeing and thinking about the city. Its growth is encouraging – many different people in one place generally encourages innovation – but measuring cultural success against commerce, rapid expansion and data supremacy reduces music culture to a recursive narrative of winners – and everyone else. Communities can’t only be measured against market parameters. They thrive through reinforcing social bonds and generating resilient, enduring cultures.

Over the next decade, I think a new direction will emerge that empowers funders, planners, programmers, arts professionals and audiences to build on global wins and invest in local institutions. Maybe nostalgia can be a guide.

Read more: 50 things that defined Toronto in the 2010s