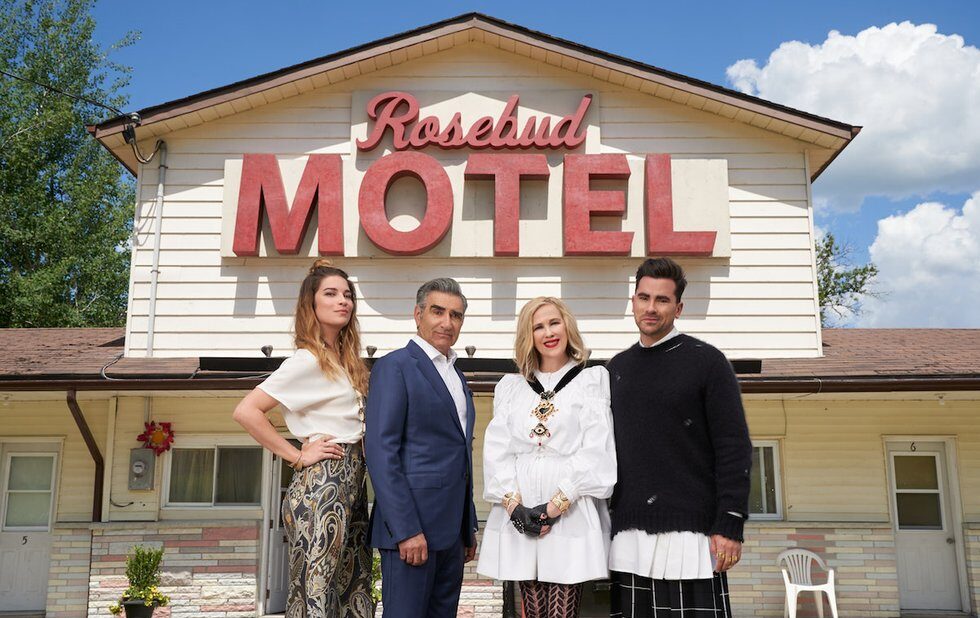 The gold dust from the Oscars has barely settled, but awards season is still in full swing: the Academy Of Canadian Cinema And Television announced the 2020 nominees for the Canadian Screen Awards – and it’s a real Schitt’s show.

I’m sorry, that was too good to pass up. Dan and Eugene Levy’s sitcom – currently airing its final season – racked up the highest number of nominations of any single work, nabbing a dizzying 26 nods for the country’s top TV and film awards. It’s up for best comedy series, three of the five slots in the comedy direction category (for Jordan Canning, Daniel Levy and Laurie Lynd) and four of the five slots for comedy writing. (Jared Keeso and Jacob Tierney’s Letterkenny episode, Yew!, is the only other challenger there.)

And of course the cast was showered with nominations: lead actor nods for each of the Levys, lead actress nods for Catherine O’Hara and Annie Murphy, supporting actor recognition for Chris Elliott, Dustin Milligan and Noah Reid and supporting actress nominations for Emily Hampshire, Jennifer Robinson and Sarah Levy. And yes, these nominations are for the 2019 season next year, everyone will be back at the 2021 awards for this year’s final run of episodes.

In the comedy series category, Schitt’s Creek is up against Jann, Kim’s Convenience, Letterkenny and Workin’ Moms. Jann is also in contention for lead actress (Jann Arden) and guest performance (Rick Mercer) for a total of three nominations, while Kim’s is up for nine, including nods for lead actor Paul Sun-Hyung Lee, lead actress Jean Yoon, supporting actor Andrew Phung and actress Nicole Power and guest star Amanda Brugel.

Letterkenny has a total of 10 nominations, including comedy direction, comedy writing, two editing nominations and nods for lead actor Jared Keeso, lead actress Michelle Mylett and supporting actor Mark Forward. And Workin’ Moms scored five nominations in all, with creator/star Catherine Reitman nominated as a director this year – but not as lead actress. (The other nominations were for guest stars Dan Aykroyd and Wendy Crewson, and for Maya Bankovic’s photography.)

If the TV nominations didn’t really offer too many surprises – well, it’s lovely to see Thom Allison and Kelly McCormack nominated for their really great supporting performances on the final season of Killjoys, and it was genuinely surprising to see CBC’s short-lived Street Legal reboot score just a single nomination, for Rosemary Dunsmore’s supporting performance – the movie slate was here to shake things up.

And the film nominees are…

All five of the best picture nominees are also up for best director, but in a curious move, the film with the most overall nominations isn’t on the list: François Girard’s The Song Of Names carries nine nominations, all in technical categories – for art direction/production design, costume design, hair, make-up, original score, original song, overall sound, sound editing and visual effects.

Rankin’s The Twentieth Century is the best-picture nominee with the highest number of nominations – eight in all, including an original screenplay nod for Rankin and a best actor nomination for Dan Beirne, who plays a heavily fictionalized version of Mackenzie King. Deraspe’s Antigone is close behind with seven nominations, including nods for lead actress Nahéma Ricci, supporting actress Nour Belkhiria and Deraspe’s adapted screenplay.

Nominations are a little more equally distributed between English and French Canada beyond the picture and director categories. In addition to The Twentieth Century’s Beirne, Gilbert Sicotte (And The Birds Rained Down), Ryan McDonald (Black Conflux), Mark O’Brien (Goalie) and Marc-André Grondin (Mafia Inc.) are up for best actor, with Deragh Campbell (Anne At 13,000 Ft), Kacey Rohl (White Lie), Tailfeathers and Violet Nelson, who co-star in The Body Remembers When The World Broke Open and Antigone’s Ricci all in play for best actress.

Pedro Pires’s Alexandre Le Fou, Martha Kehoe and Joan Tosoni’s If You Could Read My Mind, Charles Officer’s Invisible Essence: The Little Prince, Tasha Hubbard’s nîpawistamâsowin: We Will Stand Up and Matt Gallagher’s Prey are all nominated for the Ted Rogers feature documentary prize.

This is just a sampling of nominations, mind you. The full list, including digital media and children’s programming nominations, is now online at the Academy website. Forty per cent of the directors nominated in all three categories – film, television and digital media – are women, as are 45 per cent of the nominated writers. CBC is the broadcast network with the highest number of nominations, and Ontario is the province that generated the most nominees in all three categories.

The 2020 Canadian Screen Awards will be presented in a series of events over Canadian Screen Week, March 23-29, culminating in a broadcast gala at Meridian Hall on March 29.