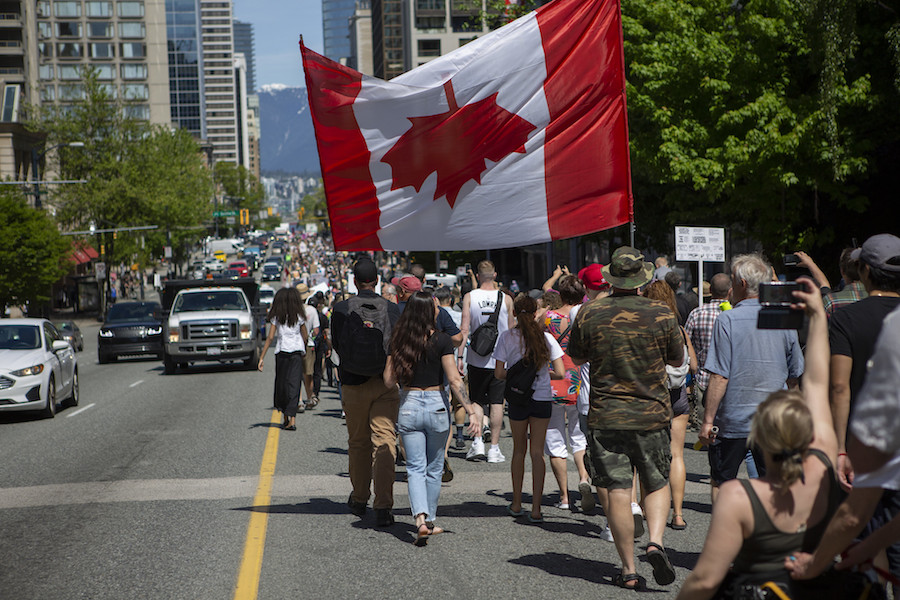 Protestors march against COVID-19 restrictions in Vancouver on May 15, 2021.

#NoVaccinePassportsAnywhere is trending on Twitter again a day after the Star reported that hundreds of Ontario businesses are ignoring the province’s vaccine passport protocols. Congrats Ontario, you’ve joined the likes of Slovenia, Scotland and others in the disinformation stupidity on COVID-19.

Little surprise given how Doug Ford has so effed up the provinces’s COVID response messaging. Ditto for vaccine passports, on which Ford has been back and forth.

Just like everything else on COVID, Ford has been late to the dance. The consequences of that have already been deadly for people in long-term care, for example. Now it’s about to get dangerous for law-abiding citizens on the street, thanks to anti-mask and anti-vax protestors who’ve seemingly been given carte blanche to intimidate and harass law-abiding citizens and businesses.

On Saturday, a group of anti-maskers and anti-vaxxers at a protest at Yonge-Dundas Square tried to force their way into the Eaton Centre. Two people – a 29-year-old man from Thornhill and a 23-year-old woman from Brampton – were arrested and charged with assault in what has been described in media reports as an “ugly” confrontation between protestors and mall security. To be sure, protests in Toronto are becoming more hostile and quickly reaching a tipping point into violence.

For that, Ford’s reluctant embrace of vaccine passports – the full system won’t be rolled out until October 22 and there’ll be no fines for those who break the law – is only part of the problem.

In Toronto, while mayor John Tory has been a strong proponent of vaccines and vaccine passports, the city’s police force has mostly turned the other way when it comes to enforcing rules around anti-mask protests, which have been a regular occurrence downtown for months now. The protests have amounted to a middle finger to COVID protocols. But cops assigned to monitor the protests have remained mostly bystanders.

In fact, according to some protestors – it may be more accurate to describe them as antagonists – Toronto police have not only not made arrests, they’ve reportedly expressed sympathy for their cause (nudge, nudge, wink, wink).

It’s hard to say for sure how true that is, but the Toronto police department was quick to clarify that it will not be responding to complaints from businesses in cases where customers may not want to present vaccine passports. That was after health minister Christine Elliott suggested businesses being harassed by anti-vaxxers should call 911.

The union representing Toronto police has also been leery of mandatory vaccinations saying it would not be abiding by an order that all officers be vaccinated.

On the protest that led to Saturday’s melee, the mayor was unequivocal in his condemnation, describing protestors’ behaviour as “illegal.”

But compared to the city’s show of force to remove homeless people from park encampments, for example, Saturday’s arrests feel like a case of too little, too late.

The problem is that the more police have stood by, the more emboldened anti-maskers and anti-vaxxers have become. We saw the result of police ambivalence outside restaurants earlier this summer; and then when they targeted hospitals. They’ve also showed up to shout down people at vaccine clinics. There have been altercations started by anti-maskers and anti-vaxxers on the TTC and in stores. Journalists, including a number of female journalists, have become the target of online harassment and threatened with violence for their reporting on the movement. The antagonism is only getting worse.

Civil liberties groups and some politicians have advocated a lenient approach by police, arguing that arrests will only play into the hands of protestors. Besides, police enforcement, they say, is no way to convince the vaccine hesitant among them to get their shot.

Except, most of those taking to the streets to disrupt are not people who have legitimate questions about vaccine efficacy and safety. Most among them come from disparate groups, including from far-right militias and anti-government movements. Many are supporters of the People’s Party of Canada, which has attracted known racists and white supremacists and Islamophobes to their cause around the issue of mandatory vaccines and passports.

These movements and the PPC are using opposition to vaccine passports to recruit for their cause.

As the Canadian Anti-Hate Network points out in a recent article, many of the central figures in the so-called anti-vaccine movement are former Yellow Vest Canada members who formed around opposition to Motion 103, the non-binding motion tabled by Liberal MP Iqra Khalid in 2017 to condemn Islamophobia.

Support for mandatory vaccinations and vaccine passports is above 75 per cent in all provinces and territories in Canada, save for Alberta where it’s closer to 65 per cent. The federal Liberal government’s election promise to require those travelling by train or plane to be double vaccinated will be another rallying point for anti- vaxxers. It’s time for police to send a strong message that there will be zero tolerance for violent anti-mask/anti-vaccine behaviour. But despite Saturday’s arrests, it may already be too late.