As his approval ratings hit an all-time low, the premier took to the streets in the middle of a snowstorm on Monday to dig himself out of COVID chaos 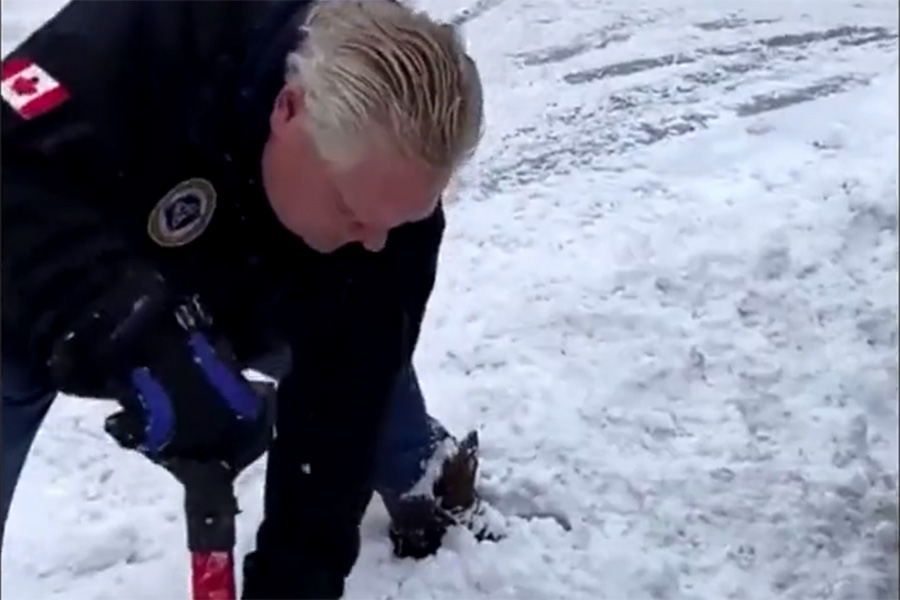 Schools are staying closed for another day after a massive snow storm walloped the city and large swaths of the province on Monday.

Was it nature’s way of telling Doug Ford that something’s wrong with the government’s decision to send kids back to in-person learning in the middle of an Omicron wave? Nah.

But voters have weighed in to let Ford know what they think of his handling of the latest chapter of a seemingly never-ending pandemic. And it’s not good news for the premier, who was reportedly out and about on Monday helping dig cars out of the snow.

According to an online survey of 5,002 Canadians released on Monday by conservative-leaning non-profit Angus Reid, Ford’s approval ratings are at an all-time low. Just three in 10 voters, or 30 per cent, approve of Ford’s performance. Only Jason Kenney in Alberta and newly appointed premier Heather Stefanson, who inherited a mess in Manitoba, fare worse in Angus Reid’s poll.

Maybe it’s the poll numbers that lit a fire under the premier.

CityNews and CP24 were eating up his snow day adventure, even Facetiming with the premier as he made his way around Etobicoke.

As PR it should have been a slam dunk, but it appears that Ford’s executive director of media relations was along for the ride, which made the whole thing come off as staged. The shovel the premier was using, which looked like it came out of a bubblegum machine, didn’t help lend credibility to the occasion. Parents weighing in on social media were just plain pissed that the premier seemed to show more regard for motorists stuck in the snow than the kids ordered back to school last week without the proper safeguards in place.

But it all made for a somewhat helpful distraction for the premier in any event who, according to Angus Reid’s poll, sits at one per cent lower in voter approval than the 31 per cent he was at pre-pandemic in February 2020. That’s when the government was in chaos and seemingly without direction following a string of patronage allegations and the ouster of Ford chief of staff Dean French. We seem to be right back where we started.

The province’s pandemic response and school closings, in particular, says Angus Reid, are the main issues wearing on voters.

It’s been an oft-repeated claim of the government that the province has been the last to close schools and the first to reopen them during successive waves of COVID-19.

But children in Ontario have spent more time learning online than other children in the country throughout the pandemic.

Business owners and their employees, meanwhile, are once again dealing with closures as health-care staff face rising hospitalizations with seemingly little relief in sight as staff shortages lead to more burnout.

Despite five waves of the virus, the Ford government has only managed to add some 331 adult ICU beds to the 2,012 in Ontario’s hospitals in the two years since the pandemic began.

The distribution of rapid antigen tests (or lack thereof) to check the spread of COVID-19, is another area of dissatisfaction among Ontario voters. According to Angus Reid, some 73 per cent of those polled said the government is doing a “bad” job distributing them to the public and getting the tests where they’re needed most. Those polled also say the Ford government has failed to adequately account for how the tests have been deployed.

In a recent interview with Maclean’s before she rides off into the sunset, Kathleen Wynne (remember her?) offered that the pandemic may have saved the Ford government from itself – at least, initially.

It sounds like the political thing to say given the number of deaths and harm caused by the pandemic, but before COVID’s arrival, the Ford government seemed to have no agenda except to tear apart Ontario’s social safety net – and do favours for Ford’s development friends. The COVID-19 crisis handed a floundering administration a second chance to see to the business of governing. And for a time there seemed to be a focus on the pandemic and some semblance of direction. That doesn’t seem to be the case anymore, with each wave of the pandemic revealing a pattern of incompetence and indecision. You could say it’s been a massive snow job.