It’s not clear Omicron has peaked, but the premier‘s handlers figure we’ll be out of the woods in 10 days’ time despite record numbers in hospital 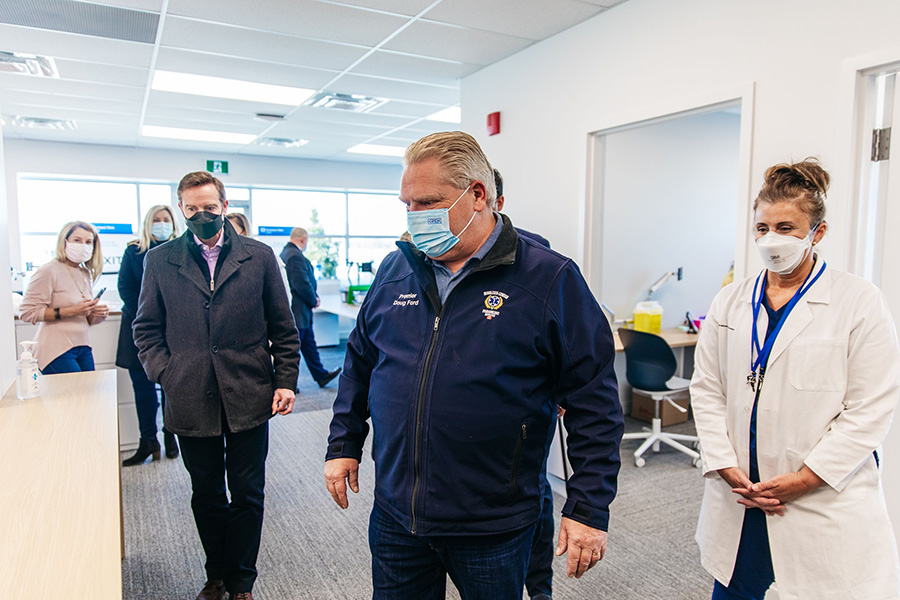 “The evidence tells us that the measures we put in place to blunt transmission of Omicron are working,” said Ford during a press conference. “We can be confident that the worst is behind us and that we are now in a position to cautiously and gradually ease public health measures.”

The news comes a day after the province recorded 60 COVID-related deaths on Wednesday, the highest single-day total since February 2021, and record numbers in hospitals due to COVID-19. As of Wednesday morning, there were 4,132 people with COVID-19 in hospital and 589 in ICUs.

It’s not clear that the virus has peaked. According to an update of federal modelling released last week, we’re in for several more “intense” weeks of Omicron.

But the premier and his handlers are seemingly prepared to roll the dice that we’ll be out of the woods enough in 10 days’ time to begin reopening and continue to lift restrictions “in the absence of concerning trends in public health and health care indicators.”

With Ford’s approval ratings tumbling to an all-time low this week following the mishandling of the initial wave of the Omicron variant and a botched school reopening plan, the political strategy seems to be to double down.

It’s a very Trumpian – and risky – move. But when your back is against the wall and there’s nowhere to go but down in the polls, it’s also the obvious political thing to do.

While hospital admissions and the numbers in ICUs may yet plateau, there have been different estimates of when the current wave is expected to peak.

At a press conference on Wednesday to set the stage for the lifting of COVID restrictions, health minister Christine Elliott sent out conflicting messages on that. She suggested that peak Omicron won’t be reached until later this month. But she also said that Omicron numbers are stabilizing and that there’s “a glimmer of hope.” She noted that average hospital stays attributable to the virus have dropped to five days compared to nine days earlier in the current wave. She warned at the same time, however, that February could be a make or break month for hospitals dealing with higher case counts because of the high transmissibility of the Omicron variant.

The Registered Nurses’ Association of Ontario says the decision to reopen is “premature and will prolong the current health system crisis.” The group characterizes the move as “irresponsible when people’s surgeries and procedures have been postponed, schools have only just reopened and ICU numbers continue to increase,” noting that the government’s early lifting of restrictions last February led to lockdown a few months later.

While hospitalization rates have seemed to level off among certain age groups (mostly younger) they’re continuing to rise among older groups (mostly seniors over 80). The numbers may all be a mirage anyway. With testing for COVID-19 cases restricted by the province in the new year, overall counts may actually be an estimated three to five times higher than are now being reported.

The overall numbers provided by the province have gone from more than 10,000 new COVID cases per day a week ago to just over 5,700 new cases on Wednesday.

Ontario’s chief medical officer of health Kieran Moore said during Wednesday’s press briefing alongside Elliott that he was still reviewing the data and couldn’t “foreshadow” whether the numbers would support reopening to 50 per cent capacity by the end of the month. Then he seemed to wash his hands of the matter.

“This is a government decision,” he said.

Indeed. It’s always been a government decision on when to reopen throughout successive waves of the virus, despite the premier’s insistence that he has been listening to the advice of medical experts. And there’s the problem.

Ford had to be dragged kicking and screaming when the government announced restrictions almost three weeks ago. He suggested to an Ottawa radio station on Tuesday that he didn’t want to do it. “No one dislikes lockdowns more than I do. I actually despise them.”

The Public Health Agency of Canada, meanwhile, was as of last Friday forecasting “several weeks of very intense activity” with Omicron, noting that even with a lower risk of hospitalization compared to the Delta variant “the number of new daily hospital admissions could still exceed previous historical peaks due to the sheer volume of cases.”

Modelling by PHAC shows the need for continued “caution and consistency” in dealing with Omicron saying that “while Canada could see a sharp peak and decline in cases in the coming weeks… even the downside of this curve will be considerable.” We’ll find out soon enough, but at the moment it seems that the Ford government has failed to learn from past mistakes.